Overcast, chilly, but dry. Light to moderate wind from North and Northwest.

The stage was fulfilled as planned, except from two misbearings on the route close to Brande. Planned distance: 108 km, biked distance: 118 km 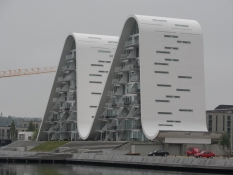 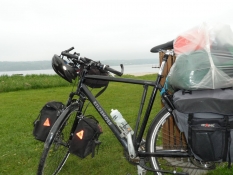 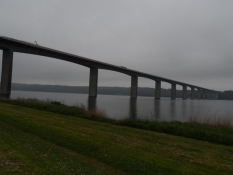 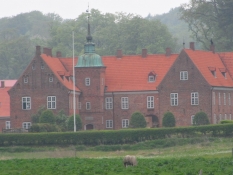 Today's stage, the first of three, began quite confused. First I let my lovely bike jacket with my big bunch of keys lying on the train to Vejle. It was ordered by phone at DSB travel center at Vejle station so that the lost property office in Aarhus station would send the jacket back to my home address. I therefore had to find that I no rain jacket had to take over, nor could I lock my lovely touring bike when I would leave it. When it was done, I started to call a hauler near Odense to book a load of paving gravel to a terrace, I and Susanne would build in our garden. Then I was finally ready to take you to the 'spring trip to Western Jutland'. So far it went towards the east, out of Vejle, the inlet bridge, through Bredballe and down to Tirsbæk, a beautiful manor landscape down to the Vejle fjord. 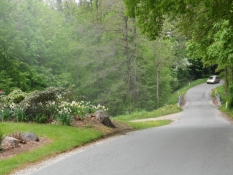 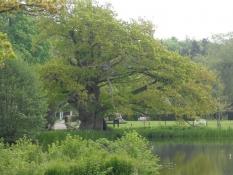 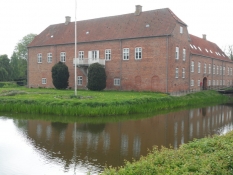 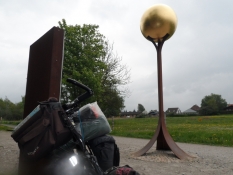 Nature was just incredibly beautiful here in late May and it compensated for some wild steep but short hills on the dirt road. In Daugaard, the climbs slowed and that came asphalt under the tires for many kilometers. The route, the regional cycle route 53, which is signposted as Bjerrelide route followed across that Bjerre district. The highest point was reached near Purhøj in the hill party Bjerrelide. From there it went downhill through Uth with a beautiful old country church to the manor Boller at Horsens Fjord. The last three km to Horsens followed this on a Planet trail, so that Neptune was out by Boller and sun closest to the trailhead in Horsens (at the harbor). Solar System distances (I think the scale is 1:1.5 billion) could be sensed when there are several kilometers between the outer planets (Neptune, Uranus, Saturn and Jupiter), while the inner (Mars, Earth, Venus and Mercury) almost come on top of each other. Now it was lunchtime, and I was looking down to the station in Horsens to buy drinks at 7-11 and then eat sandwiches on the very modern space station. Here everything seemed new and a bit sterile. After lunch I found out on the route again, now calling itself Horsens-Brande or Skjern and was signposted No. 32. The first piece went through Bygholm park. Some very nice and large rhododendron bushes in bloom must have derived my concentration, so I went wrong out of the park. But the route was easily found again and the route now went along the south bank of Bygholm lake, high up above it in a beautiful beech forest. It does not get much nicer and the sun was now up, after it had been cloudy until then. 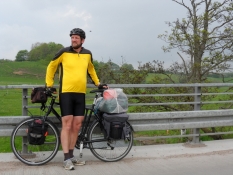 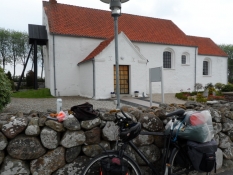 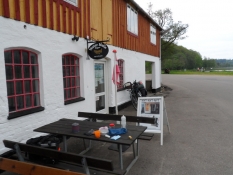 After the highway passage followed a nice dirt road, again with steep slopes. When it ended, lacked a sign and I had doubts about the continuation, but I came on without detours. A self-portrait on a bridge over a beautiful river valley cost a little nerves: I had placed the camera on the bridge railing, and while I waited for the self-timer function at the opposite railing, a truck came roaring down the hill toward me. It was too late to go over to the other side of the road to pick up the camera so I pressed me well over to the railing, worried that the truck's pressure wave would tilt my camera into the river. It didn't happen, and it was actually a good picture. Without truck on! Throughout the villages of Northern Vrønding and Flemming went against Rask Mølle, where I ran a tiresome detour up a stupid hill due to lack of signage. Now had coffee thirst announced his arrival, and since I had all the gear (I thought) with to boil coffee, I decided to seek out the campground at Åle down the lakes. But when I had rigged the whole apparatus for I remembered that my cooker's piezo igniter was broken, and I needed matches, which I hadn't brought with me. Now I was even more coffee thirsty, but there was obviously not a forgotten lighter at the campsite, and there were no (smoking) pedestrians passing by on the path. Well, it was ahead and try to find a store that sold matches. There was none on the next several miles, and even blew it up slowly from west to a steady headwind. The landscape remained quite hilly. At the church in Hammer, I saw an old man who piled stones on an excavator bucket, and I asked him about fire. He looked like an old nicotine addict, but he was not and did not have fire on him. Yet he conjured an old-looking domestic box of matches that allegedly had been inside a workshop. I thanked him, in the very exhilaration at the prospect of a refreshing cup of coffee I trudged back to the bike at the church and built the entire cooking circus up again inside the porch. But there was no coffee here as the matches had been wet and partout could not be lit. It was by now half past four, but that was it. Up on the (iron) horse again and through the beautiful hilly landscape at Tinnet scrub and Hærvejen where I have been several times (and visited Gudenåens and Skjern river sources). Okay, I still had an eye for it, too, because the sun was out again. There followed a delicious descent to Roerbaek lake and Vester Mølle. There was very picturesque down by the lake, where a carload of pensioners enjoyed their dinner by the lake. I wonder if one of them was smoking? No, there wasn't, but one of them was kind enough to go to the car and find a lighter (which was working!), and which I could keep to eternal inheritance and ownership. What is happiness, and how tasted the coffee well. 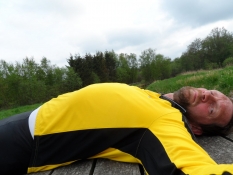 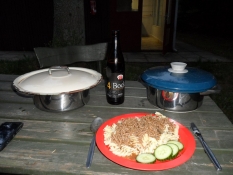 I must have been quite delirious afterwards, as I went wrong again. This time it felt pretty stupid, because the detour was two miles, and I had to follow a busy road with no bike path back to the route. Now began the trip to feel long, and at the extensive highway construction works shortly before Brande there were a sign that the road was blocked and there was arranged a detour, I was a bit weary now. But I got now well through road works on my bike and was soon inside Brande. In fact, I bought in for dinner, meat, pasta and a strong bock beer from Thisted. I knew that the campsite in Arnborg had no store, but my fatigue did that I forgot breakfast purchases. Well, so far there were approx. 14 km back. They should prove to be quite hard and long. First I took but a few pictures of beautiful house end in Brande, a local specialty. Not the hills were challenging now, but a long dirt road with quite large gravel stones. It followed Skjern river, and the landscape was quite enchantingly beautiful. But now I had, honestly admitted it hard to enjoy it longer. I would really just like to reach my goal, put up the tent and get a hot bath and a big lump of food. Finally ended the gravel road and Skjern river and then Rind river were crossed. At the church in Arnborg I just kept inside by the local history museum opposite. Now there were only a few kilometers, and when I thought he had reached the entrance to the campsite, I was welcomed by a fiercely yapping little dog. I could not hear its female owner's voice before she had made it shut up. No, I had to go a bit further, then came the campsite. I just not wanted to go more detours now, I could feel myself, and a little after, it was approx. seven thirty, the goal was indeed reached. A lovely little nature camp, where I was well received by the campsite leader and his wife in their tent, and then I was shown a nice little place in total shelter and was explained to the shower head function. Toilet, shower and kitchen were in one building. The facilities were old and well used, but these are all clean and tidy. While I set up the tent, I started getting cramps in the thighs. I drank some more water, and it stopped. After a hot bath in the very small and primitive shower rooms, it was time to cook dinner on the gas stove. Good that I had the lighter, otherwise I had had a "coffee problem" again. Hunter sauce with pasta and Thy-bock beer tasted heavenly. I tucked a huge portion away at the table outside the kitchen. Now the dusk fell, but I lacked the dishes. Therefore it became quite dark before I went on my usual evening walk in the area. Several times I checked the way of not getting lost on the way back. It would have been unbearable not being able to find my tent in the dark. I was down by the place, where Rind river runs into Skjern river. Two mighty rivers, it seemed, in a very wide river valley. Nature was everywhere, spring felt fresh and strong, and I felt looong away from home. Freedom could almost be cut into slices. Almost as in northern Finland! However, with the difference that it was now completely dark. Therefore I was looking up at the campsite and tent, which I found without any problems. I probably should have been drinking more water along with the teeth brushing, a short time (I think) after I was asleep, I was awakened by some nasty cramps in both thighs. It did ouch as young people say. But having emptied an entire bike bottle with water, which fortunately was in the tent awning, I fell well back to sleep and slept fairly rest of the night, but I woke up many times because my head was strange!