Overcast and chilly, 15 to 16°C. Occasional light showers and light to moderate breeze from southeast, thus a headwind most of the day.

I biked alone from my home in Odense via Faaborg to Soeby, where I met with my brothers we and we started our common bike weekend. Thus the common part of the stage was 31 km, which was from Soeby to Skjoldnaes lighthouse and back plus from Soeby to Aeroeskoebing. 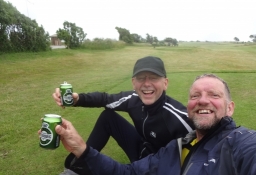 After a prologue on Funen from my home in Odense to Faaborg, from where the ferry to Aeroe departs, I first met my youngest brother Michael out at Skjoldnaes lighthouse. After a welcome beer and a cooling sea bath in the altogether, we met with our brother in the middle, Bernhard, at Soeby harbour. Together we then cycled the few hundred metres to the house where our sister Rita's boyfriend Egil lives.

It was so nice and cozy to start our joint cycling weekend with our visit to Egil and Rita. Better we could simply not have started that weekend. Michael had equipped us all with retro t-shirts with the motto "Mojn vi ses i Sønderborg" ("Mojn (local greeting), see you in Soenderborg") on. We wore such as children in the 70s. First we got a nice tour of Egil's impressive and large flower and herb garden with two greenhouses and already sun-ripened strawberries. Later we were allowed to taste them for dessert. Before it was time for this, we were served a delicious dinner, which both tasted good, was a wonderful social event and gave us three cyclists strength in the legs for the 19 km cycling to Aeroeskoebing afterwards. Wine and beer did not contribute to this last criterion, but so it was. But nevertheless, we had no trouble treading the pedals, on the contrary, we enjoyed the trip along Vitsoe inlet, through Skovby and close past the "Aeroe Alps" with the mountain top of Synneshoej, soaring 68 meters above sea level. A couple of gravel road stretches and the moderate headwind produces some sweat on our foreheads, even though it was quite chilly. But then the road took us down to Borgnaes and along the dam towards Stokkeby inlet into Aeroeskoebing, where we found our cabin on the campsite, as promised "with the key in the keyhole". Now it was time for our reward: A Duke Hans beer with walnut from Aeroe brewery. One a head that is. As brothers we share. But not our beer. Soon after, it was time to bunk in the bunk beds. I drew a blank and had to climb the ladder, but I am indeed the most agile of the three of us, despite my older age ;-)