Sunny and warm, from 20 to 23°C. Still a moderate easterly breeze, but today that meant mostly cross- or tailwinds.

Due to the fine weather we expanded the stage a bit by going via Voderup cliff. In Soeby we parted, and I biked home to Odense via Faaborg. (I cycled as planned, but my own planned tour does not appear here). 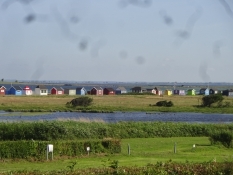 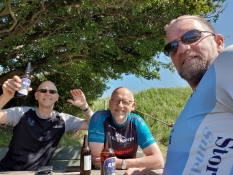 The next morning we got up early to enjoy the day, for now the sun had returned and we hung our wet clothes and shoes on the cottage terrace while we had breakfast. The supplies were just sufficient for that from the shopping I had made in Soeby on Friday night. Plus the coffee that Bernhard had provided. And paid for. Thanks for the coffee, Bernhard. At the camping boss, I settled the bill and bought beer, and then we were ready for the last stage of the weekend, the 20 km back to Soeby harbour, where the parting hour loomed. This time we cycled across the island with a considerable climb as a result. Unfortunately, my front wheel crackled a lot, and my technically ingenious brothers immediately designated the front wheel bearing as the culprit. It had to be left for now. Soon we reached Tranderup, but the goal was Voderup cliff, one of the highlights the weather had spoiled for us yesterday. But now we certainly enjoyed the cliff to the fullest, including a glorious beer break at a table along the stairs down the cliff and a swim at the bottom of it, this time in our birthday suits, as we prefer. It was great to be dipped. 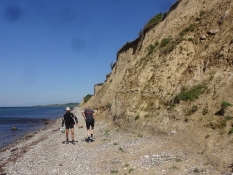 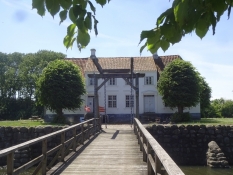 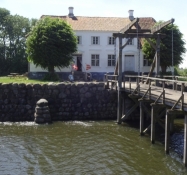 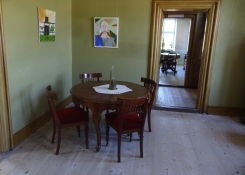 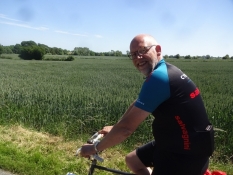 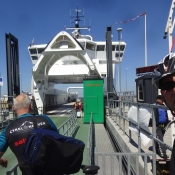 Now it was not far to Soeby harbour anymore, but one highlight was left in the form of Soebygaard manor. Originally it was a medieval castle, of which the rampart still sits high up, but in the 16th century a new Soebygaard was built. It was a very small manor house on an island in a lake, complete with moat and drawbridge. Since it  dilapidated, and in 2006 I had been here where the place was completely overgrown and derelict. But in the following two years, rich funds and a lot of fervor transformed the place from an ugly duckling into a proud swan. Most impressive are the huge stone pitching around the moat. At a table-bench set, we had our sandwiches and read about the history of the place. It was Duke Hans the Younger who had built it, and he is well known on our home isle of Als as well. No wonder, since Aeroe in a way belonged to the duchies, but not to Schleswig, as Als, but Holstein. He was a very happy-go-lucky gentleman, and as such left a lot of bricks behind, especially when someone makes the effort to maintain and restore it as here. He has also given his name to a beer that we had enjoyed on Voderup klint. It contains walnut and is very delicate. There was also an exhibition on smuggling at the manor. I smiled reading the answer to the question "why do people smuggle?", Which read: "The question should be 'why should people stop smuggling'." Very funny, but nowadays the EU and Marianne Jelved have put a stop to this by introducing the "Single Market". That this novelty then suffocated the socalled spirit boat routes in Soenderborg to Germany is a far sadder consequence, as there was no business in running them any longer without the tax saving motivation. But now the last kilometers to Soeby and the ferries to resp. Als and Funen could no longer be postponed. "Mojn, see you in Soenderborg". Or in other fine places, God willing. In the ferry port, we hugged each other, thanked for a nice-nice weekend, and I was praised for planning and implementation. Next year it's Bernhard's turn, and Michael and I are already curious about what exciting experiences it will comply. But until then, no thought about that. For the time being, it was a boat trip to Fynshav on Als for the real southern Jutes and to Faaborg for the exiled Funen resident. From there I cycled home to Odense in just three hours in still very nice summer weather.