Out of Svendborg on city roads and across the Svendborg Sound bridge and across the islands of Taasinge and Sioe as well as on the Langeland bridge on the bike lane along the main road from Svendborg to Rudkoebing. From Rudkoebing on minor rural tarmac roads to the Langeland fort. A short detour into a wood with a tentsite on a swampy forest trail. Then again small roads into the town of Bagenkop and after a rest here all the way to the tent site at Skovsgaard manor.

Otherwise than planned I rode the trip together with Kolja and only on Wednesday due to bad weather on Tuesday and a long work day on Monday. Thus we took the train to Svendborg and cycled directly to the Langeland fort. From there to the Southern tip of Langeland and to the tent sit at Skovsgaard. 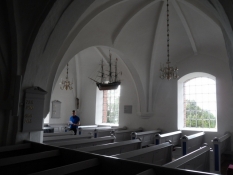 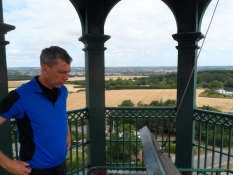 This trip was supposed to last three days and the starting point should have been Naesby, but due to time constraints and bad weather on Tuesday it was changed to a two-day trip starting from Svendborg after a train ride from Odense there.
Kolja wished to try out its new outdoor equipment with panniers, sleeping mat and his newly purchased tent, so the nature camp site at Skovsgaard manor on Langeland was an obvious choice foor accomodation, as I had originally designated it as my target. Out of Svendborg Kolja had some trouble with his pedals, so I happened to go away from him onto the Svendborg sound bridge, but luckily we were reunited on the Funen side of this, fit to embark on the ride south. At first we cycled just out along the two-way cycle track along with Svenborg-Rudkobing road. It rises steadily upward towards Bregninge church, and although I thought I had eaten breakfast enough, I felt almost sugar cold on the way up the hill. Therefore, we made a break at the foot of the church, where a bun and some lemonade made me feel fit for fight again. It was great to sit in the grass in the idyllic garden outside Taasinge museum and the green areas around it, where goats and cattle grazed. After resting we also went into the church and up the tower, which offers sweeping views in all directions. The weather was fairly clear and we could see both islands of Lolland and Als, and it is the only place in Denmark you can do that at once. Moreover, one can count a record number of church towers from here, all in alle a whopping number of 65 at its best, but the air was not that clear. I could not discern any church towers on neither Lolland, Aero nor Als. But now we had better get a move on, because Kolja and I had big plans on the island of Langeland. 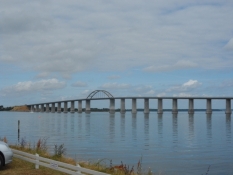 Langelandsbroen fra 1967/The Langeland bridge from 1967 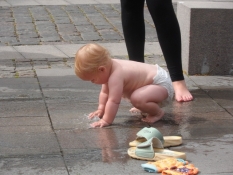 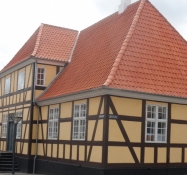 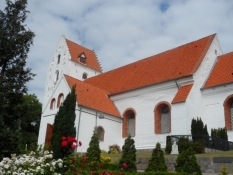 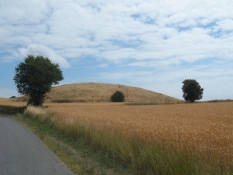 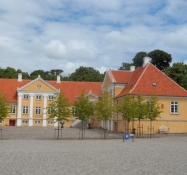 Therefore, we now put speed into our bicycles, and especially Kolja rushed so quickly across the flat southeastern part of the island of Taasinge, across the causeway to Siø and this flat, boring island, that he soon was just a dot the landscape from my eyes. But on the Langeland bridge, where there as usual were road works, we restored our contact. We looked down at Rudkobing and Langeland. Now we were, where we wanted to be and slowed down tremendously. Thus we rolled down from the bridge along a very narrow dirt path and then in a large curve down to the harbour with great views of the bridge. We also spent some time in Rudkøbing town centre where we sensed it was tourist season with a great crowd at the stores that primarily serve tourists. While Kolja was inside the tourist office to stock up with brochures for our visit and perhaps meet acquaintances, as he is in the same business, I enjoyed myself out on the town square, where a little boy, almost just a baby, wearing only a diaper, played in a fountain that sprayed water up directly through the tiling. The weather allowed that kind of amusement. After the visit to Rudkobing we found the bike route to the south, crossing the ring road through a tunnel. Now we were in the countryside, and it's really rural here on Langeland. The cycle route avoids the summer busy and quite narrow mainroad to Bagenkop, but follows small and very rural roads. Here you will meet only other cyclists, and it's just encouraging that others have the same interests as yourself. There was only the consideration of a maximum of eight tents at a time allowed on the Skovsgaard tent site to worry about. The only place the cycle route touches the main road was in the village of Lindelse, and here we chose to eat lunch, so we took our lunch boxes and water bottles up to the cemetery and emptied both items with great desire. And at Danish cemeteries you can always easily fill up your water bottle again. It was pretty hot, and then you gulp down a lot of water. After Lindelse we continued along the cycle route just to leave it in Brandsby and trial and error with a homemade route to Tryggelev and further down south until we hit the bike route again south of Kinderballe. I allowed myself, pretty idiotically, to blurt out that it sounded like paradise for a pedophile. Probably so sick that no one understands it anyway. I was perhaps a little delirious in the heat, perhaps from lack of coffee, and the many hat shaped hills I took for virgin breasts. What they indeed are called down here on Langeland. The next village was called Magleby and had an idyllic church. Then we eventually ended up on the hated road. The solution was to roll right over it, but then we ended up on the courtyard of the manor Broløkkes. The manor is beautifully maintained with newly planted trees in front of it and old ones behind it. Soon after, however, we were out on the road again, which could not be avoided the last stretch to the road to Langelandsfortet which we had plans to visit now. 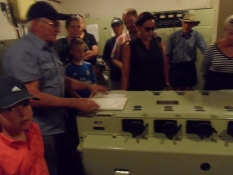 På rundvisning i operationsbunkeren/A guided tour of the operational bunker 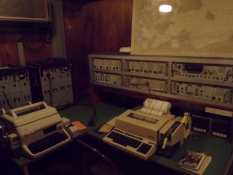 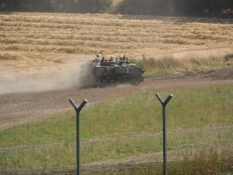 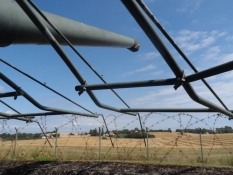 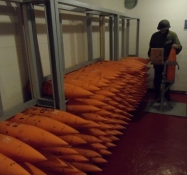 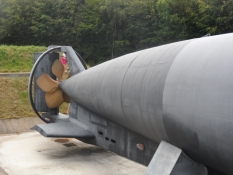 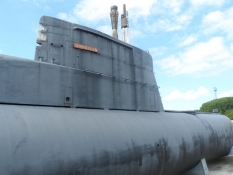 Stor, men lillebitte i forhold til de amerikanske ubåde/Large, but tiny compared to US submarines 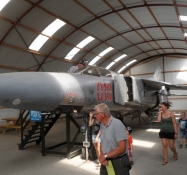 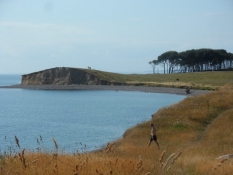 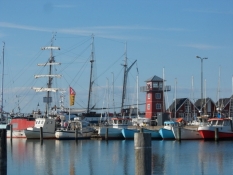 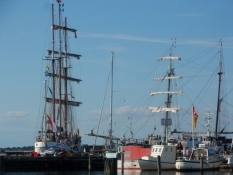 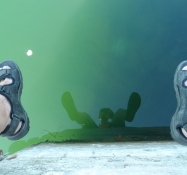 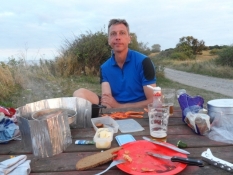 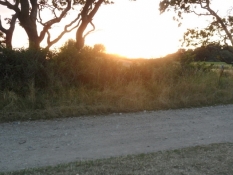