The canal path alon the Main-Danube-canal is mostly tarmac and almost no climbs apart from short, moderate climbs in connection with the locks. Short stretches with very fine gravel surface. The tarmac is reasonably well maintained.

The bike week's first day and stage. The first of the day spent in Bamberg, then a short stage to the tent site a few km's north of Forchheim. In the evening a trip into town. 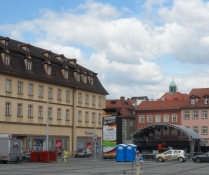 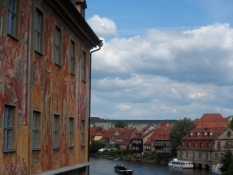 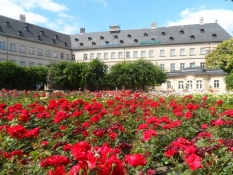 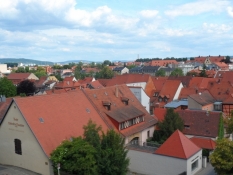 Hvilken gødning bruger de mon?/Which fertilizer do they use here?

After a night and morning on the rails I arrived in Bamberg just after noon. I had slept okay in the night train from Odense to Fulda, but as it arrived here already at. 5.23, one as to get up early. And then I went very slowly in three different regional with change at Schluechtern and Wuerzburg. But luckily I could change trains without taking all my luggage off the bike which I necessarily had to do in the night train as its doors sit high up and are too narrow for a bike with panniers on.
The sun was shining and I was in no hurry in Bamberg. Happy as a pig in shit. Therefore, I read the newspaper in the pedestrian zone, before I slowly moved me up to Cathedral Square via the charming town hall on its island in the river. The story is that the city government wanted to avoid conflict between the two boroughs Inselstadt (Island-town, between the two arms of the river Regnitz) and Berg Stadt (mountain town, that is the ecclesiastical center around the cathedral) and therefore placed the town hall on an artificial island in the right Regnitz arm. Today there is another stream through the center: the Main-Danube Canal, which I would follow all the way to its mouth in the Danube at Kelheim.
But so far my plan was to spend a day in the lovely town of Bamberg, one of my absolute favorite cities in the world, both because of its intact medieval town center, which escaped major damage in the last war, but also its status as "one of the beer capitals "as Carsten Berthelsen call it in his famous book" The Beer Journey". Beer, culture and beer culture is part of the subtitle, and I wanted to experience that here in Bamberg. After stopping on the bridge at the town hall I rolled slowly past the hotel Brudermühle where I had once stayed during a beer journey, right next to the waterfall outside. Then I geared down firmly, and then stamped up to the large and beautiful cathedral square, which is located high above the town. When I had caught my breath, I remembered that I wanted to see the rose garden behind the new residence during the summer. The other times I had been in town, had been in the fall, and then, the rose flower was over and the bock beer's introduction was the target of my trips to the city. But now the rose garden stood in full bloom, and it was a pleasure for all the senses. Okay, you could not hear them! But otherwise ... gosh! Besides the garden is very nicely located behind the residence's restored facade next to a balustrade, which offers fine views over the city and up to Michaelsberg with the large St. Michael's monastery and the magnificent abbey church. Bamberg is also called the Franconian Rome, as it (if you count it all twice, I think, so maybe in a hefty beer intoxication) is also built on seven hills. And Franconia is the name of this part of the State of Bavaria, specifically Upper Franconia. 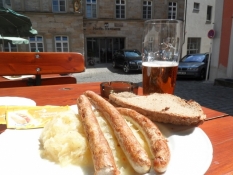 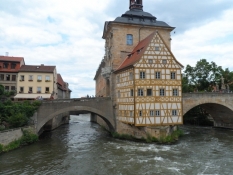 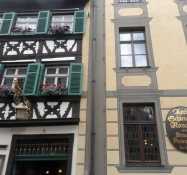 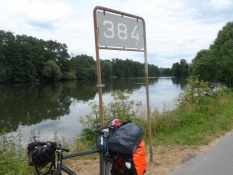 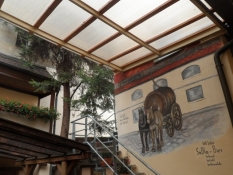