Sunny and warm weather. Light southerly winds. No resistance from the wind whatsoever. Perfect cycling weather apart from a few drops of rain in Braniewo.

Two stretches of the stage are not cycled. First a train ride from Kaliningrad to Mamonovo and then a boat trip across the Wisla lagoon from Frombork to Krynica Morska on the Wisla spit. 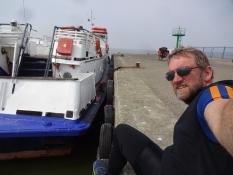 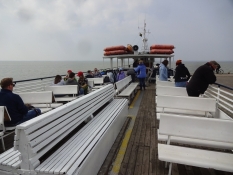 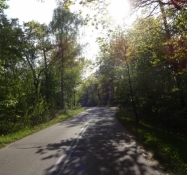 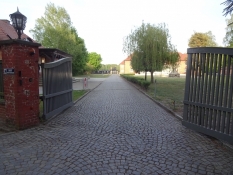 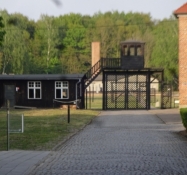 The weather was really nice and it was great to sit on the deck and listen to the youngsters' laughter and singing songs. The sunshine was a bit hazy, and the Frombork Cathedral quickly disappeared in the haze. The crossing lasted for two hours, so there was time to let the soul dangle as I call doing nothing. In the middle of it all, I thought a cup of coffee would be nice, so I slid down the stairs to the tuckshop woman down there. Luckily I had zlotys in my pocket because even the ferry trip I had only been able to pay cash. I sent Natalia a friendly thought. After all, she had shown me the way to the advanced exchange office where one could change money to both rubles and zlotys. Spasibo, Natalia. On my way up on deck again with my coffee in a plastic cup, a small accident happened. I spilled coffee on my left hand. It was instant coffee from a kettle, so it was close to boiling hot. And in the toilet, there was only (very) hot water, no cold, so I bought a bottle of cold water, which I slowly let run over the hand up on the deck while gently slurping coffee with the other. None of the young people took notice of me and thank you for that. They sang energetically in English and jabbered in Polish. They made a very sympathetic impession on me. And totally inside their own world. Shortly before arriving in Krynica Morska there was a sail regatta on the Wisla lagoon. The ferry had to evade a few quity speedy sailboats, even though there was almost no wind. Good sailors then! On the quay it was lively as many parents greeted their children back, who had been a trip in Frombork. I could feel the rush hour on the road, but it quickly petered out. I trod well in the pedals, even though I had time. I just enjoyed to roll through the beautiful forest, so Kahlberg, now Krynica Morska ("Sea Well"), got no attention from my side. Other than that I found that the houses were beautiful, often newly built, and the old ones were well-kept. Ah, the European Union has nevertheless given the Poles some prosperity. Just a pity that they do not seem to appreciate it much as they in large numbers vote for politicians who disregard common European values such as the division of power. It is really sad that during the PiS party's (that's its name, really!) leadership during the reign of the Kaczynski twins and Prime Minister Beata Szydlo ("The Awl"), Poland has become so nationalist and narrow-minded. I thought about that while trodding to the west. I wanted to reach a campsite 18 km before Gdańsk, within the city limits, so I had as much time as possible to have a look at the city tomorrow. Where the Wisla spit ended, near the small harbor town of Katy Rybackie ("The Fishermen's Cabins"), I bonked. I had gone too hard, and suddenly the "petrol" was finished. Fortunately, I found a small supermarket where I even found my beloved "kvas", malt beer. I sweat a lot and spoiled my sunglasses in my hands when I lost them in the store. Typical with miserable motor skills when you are physically down. Well, I also bought a liter of ice-cold milk and steered the bike down to the harbor, where I experienced a real refreshment by way of muesli with milk, kvas in abundant quantities and biscuits, fruit and cake. It was very quiet down here at the harbour, while I sat chewing on the quay and looking out over the water with a rush bed right in front of me. The evening light was absolutely enchanting and I decided to ride slower now. I would easily make my goal on the Sobieszewska island. A ferry across a canal dug into the Wisla delta as its artificial mouth would take me there, and I didn't need to rush. That's why I soon stopped soon again, just after the village of Sztutowo. It was called Stutthof in German time, and in World War II there was a notorious concentration camp here, which today is a museum and memorial. My sons had visited the museum a year ago and had told me about their experiences and sent pictures. I tried to imagine the horrors of the past with that in mind and by reading on the boards at the road. The museum was closed now, and I had had no time for a visit, but I had a look through the "Death Gate". More than 60,000 people, most oppositional Poles and Jews, had been murdered here, not through poisonous gas, but through all kinds of torture, hard work, and poor nutrition besides humiliation and degradation on the part of the SS. Among other things it was the prisoners' task to test shoes for a nearby shoe factory, so the wear could be documented by the prisoners walking round and round on a specially constructed "shoe test track". Man has really weird ideas indeed. I also looked into the garden of the SS Commander's villa in front of the camp. It said on a board he had been a nice family person. While death and misery ruled in the backyard on his command. Scary! Outside at the main road a narrow gauge track ran. A board described how prisoners were taken from the railway station in Tiegenhof (Nowy Dwor Gdański) to Stutthof in cattle carriages and unloaded right where I stood now. On such a beautiful spring evening with birds singing in the trees this kind of horror is hard to imagine, and it is after all 70 years ago. But yet. It must never happen again! 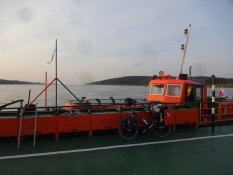 I went fast to the west, but the cars began to annoy me a lot. They were not many, but went at very high speed, and the road was quite narrow. So in a couple of villages, I cycled through them instead of staying out on the main road. One place I bought beer for dinner at the campsite. I judged that the store was probably not open yet, and was proven right. But I should have bought bread for breakfast too. Soon I reached Wisla's mouth. A couple of cars and bicycles met me. Great, that meant that the ferry had just arrived, and a few seconds later, it laid off again with me on board. Last year it had blown so much that it had been out of service and Alexander and Simon had to cycle a large detour on heavily trafficked roads into Gdańsk. The river is vastly wide, one of Europe's great waterways in the style of the Rhine, the Elbe and the Oder. And this was a few kilometers from its mouth into the Baltic Sea. On the other river bank I was set ashore on a large island in the old river delta, Wyspa Sobieszewska, which belongs to Gdańsk city. And it was immediately evident that it is a rich city. Both houses and the road were in perfect condition. They built a broad cycle path of red tiles, which, however, had not been completed everywhere. A lovely welcome to the city, although it was not felt out here. Nature reigned in a large dune forest with sparse cottages and several campsites. Mine seemed completely abandoned, but the gate was open like the sanitary room and the camping kitchen. Well, good I had shopped for food then, as the restaurant was closed too. Again, I was unable to contact the camping warden by telephone. That had to wait. But there were also no other campers besides a few empty caravans on the periphery. A little girl was swinging in the playground. So much for life. A somewhat lonely camping life, but I enjoyed the peace and quiet. Again it was an open pine forest, I pitched my tent in, and again they had swept most of the cones away. After a much needed bath I cooked myself an even more needed evening meal in the primitive but large camping kitchen, pasta screws with meat sauce, washed down with excellent Polish beer. There was also a huge guild hall attached to the kitchen. As I stuffed myself to my heart's desire, it began to rain quite heavily on the tin roof above me. It came as a big surprise after the perfect and quiet sunny day. But fortunately I had closed the tent up on the hill top so I let it rain. Before I hiked over to my tent, it had turned completely dark in the woods, and it only dripped from the tree tops. Now it was time to snuggle and sleep the righteous sleep.