In the morning sunny. The afternoon was very unstable with some heavy showers, including also hail and thunder. In the evening sunny again. Fairly light winds from south and south west, except during the showers. Still chilly, but somewhat warmer, about 13 to 14°C.

I still follow the North coast path, No 47, which runs on tarmac or gravel, mostly on a separate gravelpath, i.e. through Hornbaek forest, along the coast or through the cottage areas. Short stretches along the main road on a broad sidelane, which at one place contains deep draining wells, so you have to avoid them on the fairly busy road. Not safe for children! Otherwise a very beautiful route through a lot of woodland and along lakes and big ponds. Nice and safe approach to Elsinore. In Sweden my trip along the Kattegattleden route (it runs for 390 km from Helsingborg to Gothenburg) starts. Excellent bicycle route! That goes for the choice of route, signposting and surface. Safe (and yet not too cumbersome) crossings of main roads. After Lerberget I skip Kattegattleden and continue on a disused railway track on fine gravel to Moelle. From there again on tarmac on a minor road with light traffic out on Kullen.

I had planned to cross the Sound with the Sundbussen company, but they were out of service due to the coronavirus restrictions, so I went with Forsea instead. Price: 45 DKK, incl. bicycle.

I didn't sleep very well and got up at seven, so I would have a chance to leave at about ten. The reason for this was that the corona passport, I had obtained thanks to a (very slow) quick test in Odense on Friday, would run out at about one. Allegedly I would need such a thing at the entry into Sweden. And I wanted to have lots of time for the 22 k into Elsinore. And everything went well. I even had time to supply water and a short visit to the church of Hellebaek, where the parish clerk had the goodness to let me in for a peek after the service. 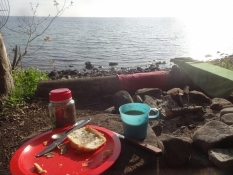 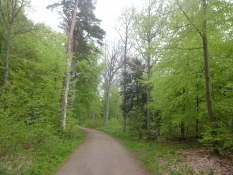 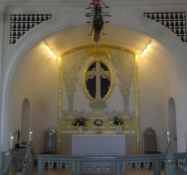 The sky above Scania looked very menacing with heavy rainclouds, while the sun was still shining on the ferry. In the harbour I was disappointed that they were only interested in my normal passport, but not the corona one, i had stood in line for for two hours and a quarter at home. In Helsingborg I met the shower, waiting briefly in a niche of the stairs from the main square up to the remnants of the fortress more than 60 m up on a hill. Nothing original is left, but the 19th century interpretation of the medieval times in form of the tower Kaernan soars up high.

Facemasks are not compulsory in shops like in Denmark, when I back in downtown bought me a drink for my lunchpacket, which I had in the sun outside a church. Here it was truly medieval!

The cycle trip north started on the seaside promenade, where the city had built a special bikepath, so the strollers were not disturbed by bikes. Through Laroed and Domsten I reached Viken, not without having to fix a puncture once.

In the small harbour of Viken people gathered around an open café with ice cream sale on the quay and I was also lured. The sun was out, but to the south the sky was dark grey and it rumbled up there. After my coffee and icecream I let the heavy downpour with hail pass in the gallery of the café. The girl was not allowed to serve a beer for me, as she was too young for that. These rules are maintained well in Sweden.

Aften Viken follows the main town of the municipality called Hoeganaes, or Højenæs in Danish (meaning High Foreland). After all I'm in Scania, which was as Danish as Zealand, Funen and Jutland before the Roskilde peace treaty of 1658. At Nyhamslaege I shopped extensively at an ICA supermarket for two and a half days consumption on Kullen. That made my bike superheavy, which I was to feel up mount Kullaberg. 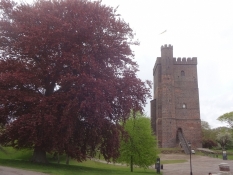 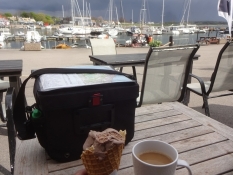 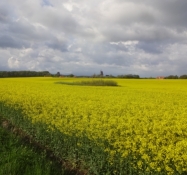 Kullen has attracted tourists for more than a hundred years with its wild nature, the rocks and its ancient woodlands plus the charming little seaside town of Moelle at the foot of the Kullaberg mountain. Therefore they built a railway out there from Hoeganaes. Of course, it's disused long ago, but its former track is now a pleasant bike path.

As the slopes are steeply ascending right from the harbour, Moelle has almost an alpine character, and I have to stop to catch my breath several times, puffing like a steam engine, up "the Italian road" on my heavily loaded bicycle. But the view from the mountain is absolutely worth it. And the weather is again lovely sunny. I decide to bathe at the Josefinelust cove on the northern coast. Originally I was to put up mit tent here also, but out of reasons to preserve nature the autorities have moved the tent site out next to the big carpark near the lighthouse. I left the bike in the woods and walked down the steep stairs with my clothes to the stony secluded cove. I had a lovely swim here.

At the tentsite it was very quiet, which was good, because they allow only eight tents at a time. Two more of them appear after me. After the pitching and cooking and eating dinner I refuel my drinking water supplies at the tap at the Naturum visitor centre and watch the sunset into the Kattegat. Privy and washing water is avalilable at the carpark. So nice to be here! I look forward to a whole day at this beautiful nature spot. 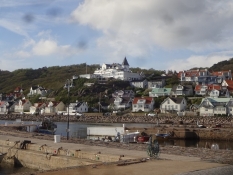 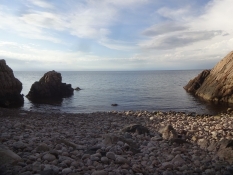 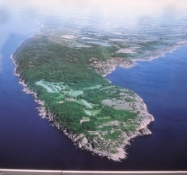