In the morning changing weather with a single heavy shower, overcast and light rain. In the afternoon and evening sunny and warm weather, 18 to 20°C. Light winds.

The GPX track comprises both a hiking trip on the tip of Kullen up and down the rocks to the western lighthouse and the Silver cave, parts of it quite difficult, and a biketrip on minor tarmac roads down to Ransvik and from there another hiking trip to the town of Moelle and back.

The planned hiking tour from the original tent site at Josefinelust proved too ambitious in the taxing terrain, so I did with a shorter one and added a bike trip.

I begun my restday in the exhibiton hall of Naturum, where the natural features of Kullen are explained. I also got a video lecture about the Swedish "Right of Public Access". It allows more in some points and forbids more in others, than I thought. Well timed, a heavy shower came along, while I was inside. This made a large group of Swedish youngsters seek shelter, and everybody clustered close together in the hallway, where there was a water suspender. Of course, they didn't wear facemasks. In Sweden I saw only elderly people use them. In terms of avoiding infection with coronavirus this was totally wrong. On top of that they blocked my exit.

But I did get out, where the shower had gone. First I hiked down to the western lighthouse, which was a small light on the tip of the Kullen foreland. From there I walked back and followed a sign and some painted arrows on the rocks, sometimes uneasily clambering, down to Silvergrottan, the Silver cave. It is very narrow and maybe 25 or 30 metres long and about two metres high, so I went in all the way. After that I opened my lunch box on an even rock at the very seaside. But there it started to drip and I sought shelter in the cave. Clever! As I had just shut my box, I heard voices and a tour guide ahead of another group of teenagers approached the cave.  As a joke I stepped out to the entrance and said in my best Swedish: "Welcome! Fifty kroner per person, please!" And lit a big smile. Igen the timing was ideal, because the youngsters annoyed med with their disrespectful bevaviour, and I was on my way anyway.

This time I hiked up to the big lighthouse on Kullen. Next to it they had placed a model of the old bascule light of 1561, which provided light then. The Danish king Frederik III had ordered that lighthouses were to be built on Skagen, Anhold and Kullen, which was then Danish. The acual lighthouse is from 1900 and has the most powerful light in Sweden. The lens rotates both day and night, while the light, of course, is only on in darkness. A bench was superbly positioned out there. 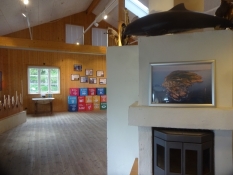 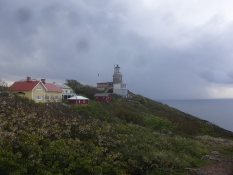 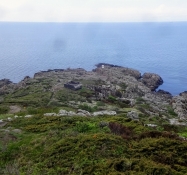 After the hiking tour in the morning I fixed my second puncture of the tour. I needed new tyres, as the old ones were worn down. Afterwards I rested in the half shadow under the trees on the tentsite. It had brightened up nicely now. After a cup of coffee i was ready to go on with my day. Now I rode my bike inwards along "the Italian road", as it is called and passed the old farm of Kullagaarden, which is being renovated. On a board I read that Tycho Brahe himself, the famous astronomer, for a brief period had owned Kullagaarden and thus was responsible for running and maintaining the lighthouse on Kullen. It said, he wasn't good at that, so he soon moved away. His most famous observatory is Uraniborg on the island of Ven in the Sound, not many nautical miles to the south.

I headed for the restaurant Ransvik, although I knew that it was closed. It's just spectacularly situated, and there's a fine bathing place in the rocks below it, so I had brought my trunks and a towel. Unfortunately, a gardener made a lot of noise with a brush cutter, but anyhow, it was nice to jump into the waves, swim a while and warm up lying on my back in the sun on the warm, smooth rocks. My first summer experience of the year that was.

There I decided to hike into Moelle along a fine hiking path and left the bike in the woods, where the path became unfit for biking. I wanted to dine at a restaurant in town. I had not shopped for supper for two days yesterday, and a little bit of luxury is allowed, even on a wilderness holiday!

I passed a couple of beautiful bathing places. One was called Ladies' Bath. Was that really just for ladies? Well, I had had my swim. And looking out for ladies I would never do. I saw remnants of ramparts from the last Danish-Swedish war in 1710. The Swedish king Karl XII had been smashed by Russia's Peter the Great the year before, so the Danish king saw an opportunity to conquer back at least Scania. But he failed, and it turned out the last Danish attempt to regain the Scania lands. 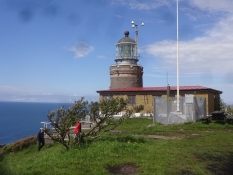 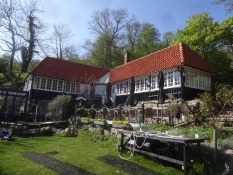 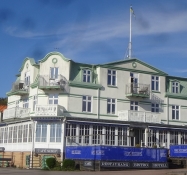 Moelle presented itself nicely in the sun, as the houses cling around the bay and look like glued onto the mountain slope. A perfect place to spend a holiday, and so have many thought for a long time. At the harbour stood four large boards with tales about Moelles history as a tourist magnet. And it said that the railway had solved a big transport problem. The dust clouds on the roads to the town had been phenomenal.

My first choice for dinner turned out to be closed, but from hotel Kullagaarden's summer terrace the cutlery clattered and subdued voices were heard. So I sat down at a table in the sun and ordered Scanian omelette and beer. It grew quite hot to sit in the burning sun for some hours, something my wife Susanne would have loved. But all the parasols were folded. Everybody was craving for sun, so I had to sing along with the choir. It was light food and the portion fairly small, so I ordered bread and was handed some dry rolls. Well, they did their job of filling my stomach, and the omelette was tasty, especially washed down with good Swedish beer.

I enjoyed also the hiking tour back to my bicycle, but not quite the 13 percent's climb (according to a road sign) to the Italian road. Beer and cycling (uphill) just don't go well along. But soon I was back on the tent site next to the enormous carpark. After a short break in the tent I biked to the lighthouse and savoured a beautiful sunset from this perfectly placed bench. I was well satisfied with my day. 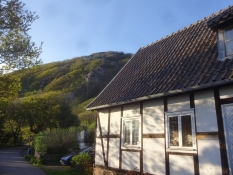 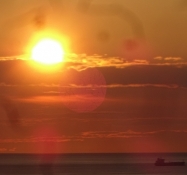