Sunny and fairly warm the whole day long. 18 to 20°C. Light to moderate breeze from the west and southwest.

Difficult, muddy paths through the forest on the Eastern Kullaberg close past Haakull and down to Arild. From there fine minor tarmac roads and bike paths into Aengelholm. Later good gravel paths and minor roads along the coast, through summer cottage areas, coastal forests and agricultural land. One stretch on a fairly busy road without a bike land, but before Torekov again on a bike path. Not so easy to find the disused tent site, as the route was not drawn into the GPS very well.

I had drawn a route through the forest in a very rolling terrain on the eastern part of Kullaberg, closely past the highest point of it, called Haakull (187 meter). At last it grew too ambitious, and I should have given up, but I didn't. So it turned out a serious test of my bike's ability to go on on very bad roads in rolling terrain heavily loaded, and it passed it excellently.

From Arild to Aengelholm I went fast in a moderate tailwind. Once I skipped a detour to the coast, as I went fast. Lunch break in the small town of Jonstorp after shopping at ICA. In Aengelholm i went all the way into town in order to shop for real beer at the shop Systembolaget. In Sweden the state authorities have monopoly on sale of alcohol above 3.5% in its own shops. They sell only bottles and cans on a single basis, no discounts at all, especially not for buying more, and the opening times are limited, e.g. always closed on Sundays. The choice is really big, the staff is polite, well dressed and knows a lot about the products. The prices  are quite high, but not extreme. This approach is, of course, to make the Swedes buy and consume less alcohol. One can call it an arrogant, very social democratic approach to stimulants, but is has its virtues. The most striking negative thing, in my eyes, is that the Swedes drink (a lot) more, when they are abroad, also in Denmark, because they exploit the sudden freedom. Finland has a similar alcohol policy, while Norway and, as I understand, Iceland create the limits to consume by way of extremely high alcohol prices. 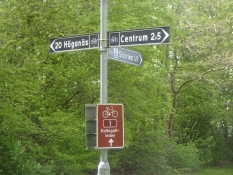 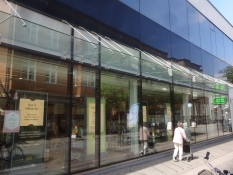 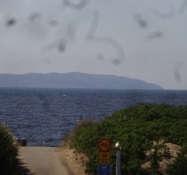 The southern coast of the Bjaere peninsula is very charming and just slightly rolling. The beaches are often beautiful sandy ones and totally deserted. The agriculture has an oldfashioned and sympathetic touch, while the architecture of the sea side resorts, on the contrary, seems futuristic.

Torekov is the main town of the peninsula on the very tip of it. It's a true holiday resort, but not as posh as Moelle on Kullen. I guess, smaller wallets are also welcome here. The harbour seems quite busy, and is also home to a small fleet of fishing boats. Off the tip of the peninsula lies the island of Hallands Vaederoe, to which there is a ferry service from Torekov. It's strange it's called Halland's Weather Island, as I'm still in Scania. Perhaps it shifted ownership once? I know that Halland turned Swedish before Scania, so that may be the reason?

I refueled for water at a toilet in the harbour, but the lights kept going out. The solution was to block the door with a pannier, so I had enough daylight to manage. I filled my two one and a half litre bottles plus my bidon. Afterwards I biked to the adjacent beach, where I had a swim from the nice jetty. As I was all alone I left out my trunks, as I always do in these cases. That makes it easier to wash myself down under. On such a wilderness holiday I don't take a bath for a whole week, and cleanliness is, after all, a virtue, isn't it? 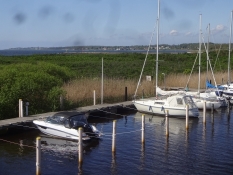 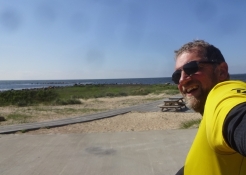 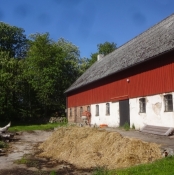 After the swim I put on ordinary clothes and cycled the last ten kilometres to Knoesen, which is a rocky eminence on the northen coast of the Bjaere peninsula. The terrain was taxing, and I bonked just before my arrival. Luckily, I always have some chocolate and/or a banana for these cases 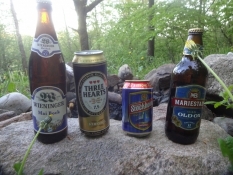 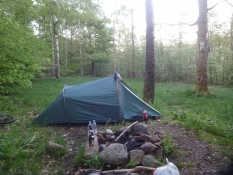 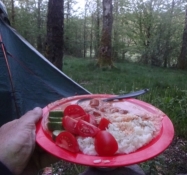