Lovely weather the whole day long. Lots of sun, light to moderate breeze from the west and pleasantly warm temperatures about 20°C. Perfect!

Minor roads into Baastad, where I reunite with the Kattegattleden route. Wonderful tarmac paths through the coastal forest and the many seaside resorts, interrupted only by short stretches on fine gravel. Excellent cycle route!

The morning on the reestablished tentsite for one night on the slopes of "mount" Knoesen was beautiful and quiet. I had only about 50 k on my schedule today, so life was slow. I also walked up to the summit of the hill.

The view from there was disturbed by trees and shrubs, but nonetheless splendid in the marvellous sunshine. The whole expanse of The Bay of Laholm, as the water between the Bjaere peninsula, where I was now, and the nose north of Halmstad is called, lay in front of me like a blue carpet and Halmstad's skyline was easily visible near the horizon. Actually, it looked quit ugly from here. However, the white beaches and dunes looked really beguiling at the bottom of the bay. 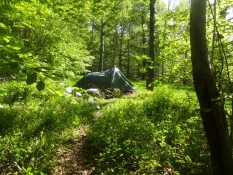 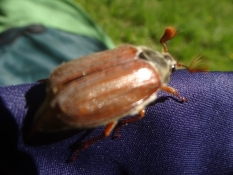 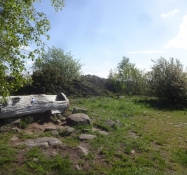 My garbage bag, including the empty beer bottles and cans I wanted to dispose of at a private garbage container, which had been rolled out to the road at the riding school, or what it was, at the end of the trail down from Knoesen. Alas, the owner was not fond of my idea. Even if my bag was quite small. I was placing the five returnable bottles and cans, I had paid deposit fee for, in front of the container, while the big lump of a woman scolded me heavily for doing so. I explained in my best Swedish that the deposit fee, summoning to the sum of five Swedish kroner, was meant as a gift for letting me get rid of my plastic bag in her garbage container. But this was not to be. I had to fix it at a shop in Baastad, and so I did. The fee was donated to Red Cross, and thus the good deed of the day was done.

Afterwards i bought new beer supplies at "Systemet" on the town market place and swallowed the content of my lunch box in the fresh air and washed it down with energy drink. Now I was ready to cycle out of Scania and into Halland. And this county welcomed me with far flung seaside resorts, summer cottages and campsites along a sandy beach, stretching for at least 30 km along the entire length of the Bay of Laholm.

After my coffee break at a modern picnic site with a stylish toilet building I trudged into the coastal forest that had been allowed to stand here. Behind it begun a very large area of dunes and behind that, of course, the beach. It was a truly beautiful place and almost commanded a skinny dip, as I had miles of sandy beach all to myself. But the long slog back for my towel was no option for me. It had to wait until Halmstad. 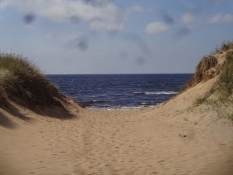 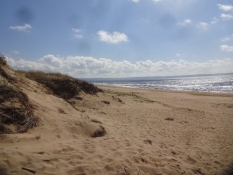 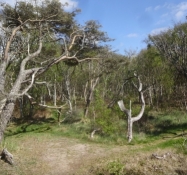 After the hiking trip an even better cycling stretch followed, where the trail sometimes came close to the motorway E6, but also swung into nature. This area was sparsely populated, and I enjoyed moving quickly and easily forward in the lovely weather. The wind blew from the west, and I was pushed quite far away from the coast under the motorway and railway.

I was now approaching Halmstad, and despite the short distance, I felt tired. And the kilometres seemed to drag along. The suburbs were not at all charming, but the cycling traffic was managed safely and functionally. Eventually, I reached the Eastern beach, which constituted my goal, and it was time for a can of beer on the beach. A Stockholm Festival from the local Kroenlein brewery. It was even not too warm.

While sitting there and looking forward to camp in the vicinity a van came rolling onto the beach and two workmen started unloading their tools. One of them came up to me and explained they were to build a stage for the adjacent hotel. He looked oriental, but spoke good Swedish. At least it was better than mine. Funny, that the town allowed the hotel to erect a building here on the very beach. But I didn't tell him that. I justed wished them success with their plans and added that it would be great.

After my last sip of beer I wheeled my bike behind a dike, as I did not want to camp too close to the beach. And found a perfect place in a small wood behind a carpark. While pitching my tent, I realised I was in the middle of a bird concert. I enjoyed the mighty voices, but wasn't able to spot the birds.

Now it was time for a bath, which I had at a nice bathing place for the disabled, where an Arabic speaking family had occupied the jetty, so I slipped into my trunks. The children watched the bathing savage. It was obvious they thought it was much too cold for that. 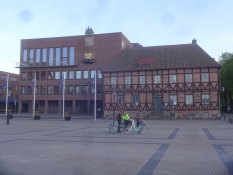 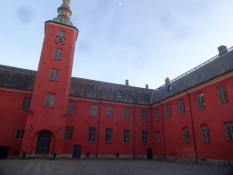 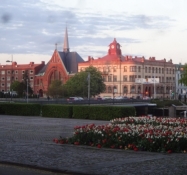 After my bath I should have hurried up making ready for going into Halmstad, where I planned to dine at a restaurant. Instead, I opened another beer in my tent and listened to the next songs of the bird concert.

I was punished for that when I around eight o'clock arrived in the town centre, where I, despite a well developed feeling of hunger in my stomach wanted to do some sightseeing first. Halmstad looked a stately town with a nice cultural offer. And when I know that I'm about to be fed soon, I find hunger a pleasant feeling.

Lots of restaurant lured me inside from the street, but it turned out that I wasn't welcome inside. I had surpassed Sweden's corona closing times for this kind of establishments. Downcast I tried at two of them and already saw me eating muesli with water for dinner, when I got the advice of a pizza take away service on the other side of the river Nissan, which divides the centre into two halves.

Pizza man was about to close his business, but, luckily, he agreed to make me a pizza frutti di mare with lots of seafood. As long I took it with my outside. They had a large outside seating area, but I wasn't allowed to sit down there either. Beer was also impossible to obtain. He looked as if I had asked for his daughter for company in my tent, when he heard me ask for that. Oh, those stupid Danes! So it was a very special experience to have the delicious seafood pizza with mussles and a Norway lobster in the middle on a hard park bench in wind, cold and in progressing dusk. That's what happens, when you don't learn the lessons of the country you visit.

But delicious food I had. Now I had only grown so cold in my body that more sightseeing seemed a bad idea. But, nevertheless, the castle interested me, so I had a glance at it. And how wonderful it looked in ist deep red colour right on the bank of the Nissan, which, subsequently, is not (only) a car here. I was astonished to read that the Danish king Christian IV, very fond of building castles and waging wars, had built it, rather a short time before Denmark lost Halland to Sweden after the Broemsebro peace treaty of 1645. Unfortunately, Denmark did not obtain any military benefits from it, as Halland was passed to Sweden as a mortgage in return for a pledge to leave the counties of Scania and Blekinge with Denmark. Only 13 years later these lands were also handed over to our greedy neighbours. Only the island of Bornholm later returned home to Denmark. The castle is built in a peculiar Nordic rennaissance style, which I do like. Light and elegant it looks, in contrary to the more pompous Italian rennaissance.

After the look at the castle, I went, or more precisely cycled, without delay to my tent in order to enjoy the last can of beer of the day, brush my teeth and slip into my sleeping bag. Tomorrow my day was to begin early, as I had to make the ferry to Denmark shortly past seven o'clock in the morning. Breakfast I would be having on the ferry, so I planned a cold start.