More chilly, many clouds and a moderate to brisk southwesterly breeze, so some headwind.

Minor tarmac roads after Grenaa, a path not easy to pass at Rugaard. The nature trail Gravlev-Ebeltoft on fine gravel from Holme. In the end a stretch on a main road without bike lane just before the gravel road to Oernbjerg mill.

In Grenaa I changed my route to pass the Covid 19-testcenter, fixed the third puncture of the trip on my bike and changed to bicycle clothing.

It was good, I had pitched my tent at a distance below two kilometres from the Stena ferryterminal in Halmstad and thus the ferry to Denmark, as my bike was flat and, what I felt, a gale blew against me. Luckily, I was able to pump my bike and all formalities for driving on board were quickly done.

On board awaited me a hearty breakfast, where I nearly collided with the Swedish alcohol laws again. I poured apple juice into a beer glass, and thus the waiter supposed, I had drunk the bottle of beer he had caught sight of in my handlebar bag, in the restaurant. As beer, to a certain degree, resembles apple juice without a head.

But now I was on my way out of Sweden, and waited with the beer, a Samuel Smith Imperial Stout from Tadcaster, Yorkshire, England, until I sat in the lounge opposite to the restaurant, and the clock was past eleven (a word that sounds like the word for beer in my local Southern Jutland dialect). At this time of day one is normally allowed there to open a bottle of beer. Otherwise I sat outside in the stern of the ship and saw Sweden and especially the Kullaberg slowly disappear in the haze. The ferry was quite empty. This crossing wasn't a good trade for Stena Line. 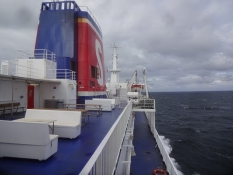 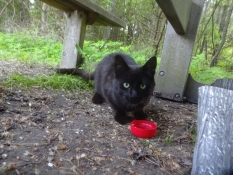 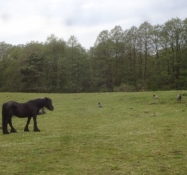 My first mission in Denmark was to be tested against corona virus, lest I by a mishap imported infection with the disease into Denmark from Sweden. Luckily, the line was not long this time. Next mission was to fix a puncture once again and change to bicyle clothing. Both were done on a playground next to a sport centre in Grenaa.

Today I wanted to experience Djursland, which consitutes the nose of Jutland. For about 14 years, from 1987 to 2001, I had come here often, as my parents in law lived on a farm about 12 km south of Grenaa, Djursland's (one) capital. So it was a bike trip down memory lane for me, through the sunken road at Hoebjerg, past well known farms, a visit at the grocery shop of Balle (mostly because my bike computer was down, and I supposed its battery was flat) and then I fueled for water at Hoed church, where I had once married.

The next attraction was the boyscout's camp of Djursborg, where I had lunch. It lies beautifully on the banks of the Kattegatt amidst woods and heath. The cycling to Rugaard proved difficult, as the trail had overgrown heavily, since I  had strolled there with my then fiancé and wife.

The wind blew me right in the face on the road down to Ebeltoft, and I made only slow progress. At the Jernhatten, a hill cliff right next to the sea, I wanted to cook coffee, but it was much too windy for my gas cooker, so I postponed that until I found perfect shelter at a table and bench set just after Holme, where I turned off for the nature trail to Ebeltoft.

Now I made far better progress on the disused railway track. The sun also peered out, and the landscape was both wild and groomed, as i approached the second capital of Ebeltoft. Here I shopped for groceries at a Netto and had a chill bath in the sea from a lovely sandy beach at Egsmark. Now it wasn't far to the tentsite of Oernbjerg mill. This I reached by way of a challenging hill on the quite busy Ebeltoft to Aarhus main road without a bike lane. The difference between this road and the silence around the old water mill was striking. No cars were heard here. A group of hikers bid me welcome from the sleeping shelter area. And both a water tap and a privy were available. Oh, how joyful all that was! 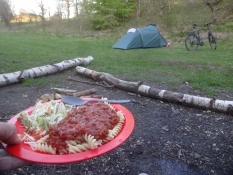 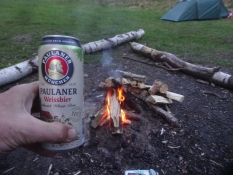 The evening on the picturesque tentsite at Oernbjerg mill turned out the best of the whole cycling holiday. Not the least, because I really lit a bonfire this time. The mill society, which runs the mill (well, the mill itself is run by the Ulstrup stream ;-) had put firewood next to the fireplace with an instruction to save some of it to the next campers. Sympathetic and quite reasonable, so so I did. Again I felt like a small boy alone in the world. And enjoyed it massively. Also with quiet music from my cell phone. But again the bird concert wasn't bad either, in this the most pretty time of spring. I was at home in my homeland again, and, as I felt it, on one of its most beautiful spots.