Chilly all day long. In the morning a mix of clouds and sun, but dry. Brisk southerly wind, so I had a lot of headwind. In the afternoon it started raining, and it kept raining for the rest of the day.

Lovely gravel roads on the peninsula of Mols, a splendid cycling route on trails and minor roads along the bay of Kaloe. Cycle lanes along trunk roads and residential roads in Aarhus and out of the city. Good, minor roads in very hilly terrain down to the Horsens inlet.

The stages comprised a visit with my son and his girl friend in the Aarhus suburb of Skejby. For this purpose I left the planned route.

As always my morning routines demanded three hours, including a slog to and from the privy. I find it hard to get going quicklier, and this is always at the expense of my well being. Why should I do without?

But about ten o'clock I rolled past the lovely water mill and out into the Mols Mountains, as they are called. Hills had be more appropriate, but in any case I enjoyed the gravel roads across Mols to the bay of Kaloe, around which tarmac paths led me. Some very idyllic villages nestle in the "mountains". I had a good deal of altitude metres on my schedule today. In addition, I got a distinctly felt headwind after a turn to the south at Havhusene, and in the afternoon it even started raining for several hours. So I wouldn't call it an easy day. 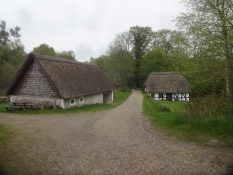 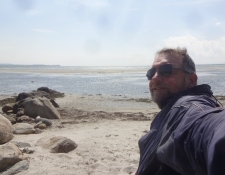 Consequently, I refueled my calory deposits from my lunch box before the climb to Skejby, where my son Simon lives in a cheap flat with his girlfriend. And they were visited by the savage. How nice it was to gulp coffee and eat rolls and muffins in their cozy livingroom.

In downtown Aarhus, which is a good city for cycling, especially if you don't hate treading up long hills, the weather turned somewhat threatening. And up just such a mile long hill to Hoejbjerg (which means "high mountain" in Danish), a very appropriate name, it began to spit with rain. Luckily, I was in good shape, also psychologically, which turned out an advantage, as I had another puncture at Tranbjerg. Without much hassle I had it fixed in a pedestrian viaduct, so I could attend to my bike in the dry.

Done that, I realised, that I would not make it to Brigsted without supper. Mind, I had hills, headwind and rain. So I entered the barbecue at Solbjerg along with a lot of other people, so I had to wait for a while for my shawarma. All other costumers took their food with them home. However, that wasn't an option for me, but by showing the owners my corona passport, I was allowed to munch my food inside the place. Luckily, the passport was still valid after my testing in Grenaa the day before. 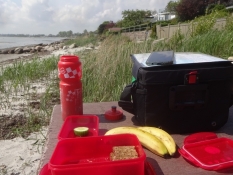 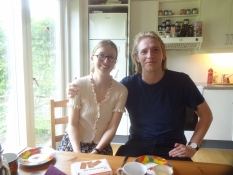 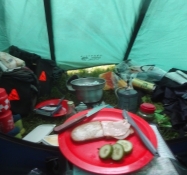 I must admit that I did not fancy mounting my bicycle and treading up the hill out of Solbjerg. I only looked forward to arrive at the Brigsted tentsite. But the 22 km down there had to be negotiated, and so they were. The rain beat me in the face on the hilltops. Normally, one is rewarded by a nice view and fresh air up these places, and here they summonned up to 109 m, while the bottoms often lie below 40 m. Eastern Jutland is like life itself: It goes up, it goes down. Only the parts up are the hard ones on a bicycle, so it's opposite in this sense.

I shortened the route slightly by going the well-known piece from Torrild to Vedslet on busy roads, but traffic was light now. From Gangsted I would go down all the way to Horsens inlet. I expected a nice "downer" as the one down to Haldrup from Aaes past Tyrrestrup manor, which I've done many times, but nothing like it awaited me, until I was in Soevind. Here the Brugsen shop was just about to close, but I was lucky to be allowed to hastily run down to the beer fridge in order to fetch three cans. That saved my evening.

The tentsite of Brigsted is situated where the tidal trail to the small bird sanctuary island of Vorsoe. In the sleeping shelter two Asians were having a good time with a bonfire and barbecue. They had put op an enormous windshield. I greeted them and decided to join them after tent pitching and bathing.

The latter turned out quite cumbersome, as the rain threatened to drench my normal clothes and the wind to blow it away. And the water was that shallow that I could barely wash myself without having a mudbath. In the end, I succeeded and later it turned out I shared the camp site with two Vietnamese men, who spoke Danish quite well. In a peculiar way they mixed Vietnamese words into it. I was even offered a small barbecue sausage and responded with offering a beer, which was declined. I had guessed, they were a little younger than myself, but it turned out they were in their early thirties. It's damned hard to guess the age of Asians correctly.