Overcast and chilly, on the mountain it was even fairly cold. But the sun came out here. In the afternoon it grew warmer, and the sun stayed out the rest of the day. Light winds.

The second rest day of the bike holiday. Accordingly, no GPS-file. 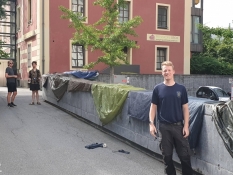 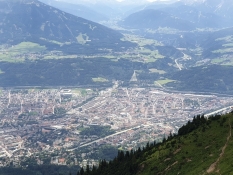 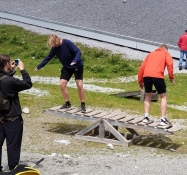 Today we had a restday in Innsbruck on our programme. First point on that was the drying of our tents on a wall in front of the hostel. My sleeping bag had already been dried in the evening before. Breakfast was done in a bakery café on the Bozner square.

The day's big excursion was one with the socalled Northern chain way, which comprised of a train and two cablecar stretches onto Innsbruck's city mountain of Hafelekar. From there we enjoyed a magnificent view as well across the city and into the valley were to cycle into on the next day as to the north into the wild Karwendel mountains. It looked totally empty and originally. As it looked, when the Alps had just formed some millions of years ago.

We enjoyed a good lunch in an outdoor restaurant at the cable car station of Seegrube with exactly this panoramic view.

Back in the city Alexander had to save me, as I had forgotten my keys and couldn't unlock my bike. Afterwards we split for som hours. Simon and I had a look at the Hofburg and the adjacent palace gardens.

Our supper, take away doeners with canned beer we had in the latter. Afterwards we sat down at an outside table of a stylish bar and were served posh drinks in correctly chosen glasses. It closed quite early, and we also hit the hay not to late. 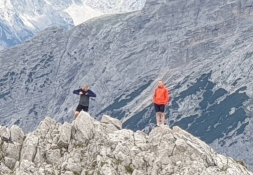 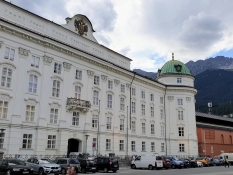 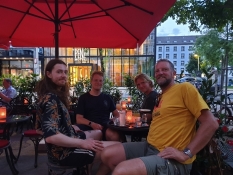