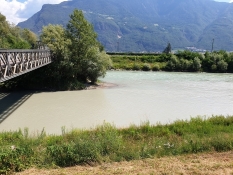 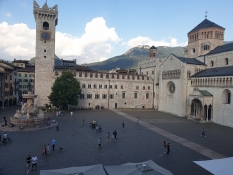 The fifth stage had its finishline in Trento, the main city of the neighbouring province of Trentino. Shortly after Bolzano we saw our steady companion Isarco flow into the Adige, which was the river we followed for the remainder of our trip, and which runs through Verona. Soon we lefter Southern Tyrolia at the narrow passage of Salorno, where the mountains come close to the river, which is the traditional language border between German and italian.

Our lunch we had at Egna, followed by a lot of water, as it had grown nastily hot. Again we fought the heat with a large ice cream on a true Italien gelateria. Shortly before Trento, at Lavis, we eventually managed to solve Thomas' brake problems with some grease. Great! Now he was fit for the downhill drive to the Garda Lake tomorrow.

In Trento I had booked a posh accommodation in an appartment situated with a view right onto the cathedral square. Additionally we were warmly welcomed by our landlady. Unfortunately, we had a quarrel about the bath, but that done, I shopped for dinner and cooked steaks with potato roestis for us. Thomas created a delicious sauce on the basis of stock with crumbled bread in lack of flour. We had wine and local beer along with the food.

We ended the day in the historical centre with yet more beer and Aperol Spritz for the youngsters. 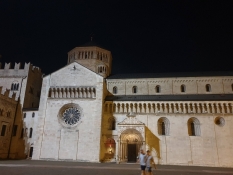 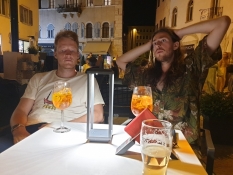