Steady summer weather with a heat wave and the well-known (head)wind conditions. Today temperatures of 37°C were recorded. 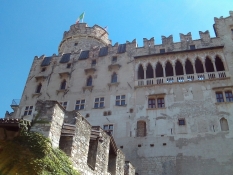 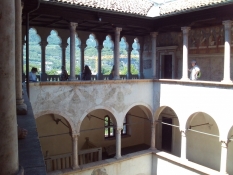 The sixth stage to Torbole on the Garda Lake was pretty short, so we had time for a look at Trento. We visited the cathedral and the former palace of the prince bishop, where a huge museum is placed. The whole of the pomp and circumstance of the Holy Roman Empire and the wealthy ecclesiastical upper class were on display.

However, we soon found ourselves down at the Adige again, heading south, and found a spot between it and the tiresome and ever-present motorway to empty our food boxes. Our coffee break took again place at a gelateria, but as we were about to scramble and leave the place Alexander and Simon weren't in for it. They preferred to follow the end of today's exciting Tour de France stage instead. It was the one, where the Dane Jonas Vingegaard paved the way for his later total victory in this year's race. Luckily, Alexander had downloaded the gps file with our own cycle route to Torbole on his cell phone, so Thomas and I were able to go on withour them.

Shortly after we left the Adige valley and swung right for a detour to the Lake Garda, which also followed a fine bike road. It took some toil in the heat up to pass San Giovanni before the downhill stretch into Torbole. It was good that Thomas had well working brakes now.

Finding spots for our tents at Europa Camping, which was dominated by German guests, wasn't an easy task either between a lot of suspended hammocks between the trees. But we succeeded and had an extremely pleasing and cooling swim in the lake from the beach just outside the campsite. Afterwards I was reunited with my boys.

Our supper was taken in at a very busy pizzeria in the town centre, so we had to take a table inside and wait for some time for our food. The evening was completed at the lakeside along with Aperol Spritz to the accompaniment of a persistent and quite noisy saxophonist. Alexander and Thomas considered him totally fake. I, on the other hand, could well enjoy the athmosphere at the lake. 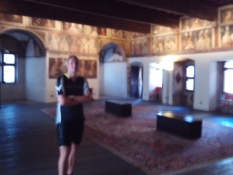 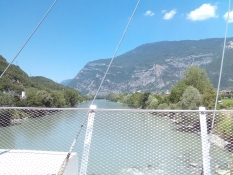 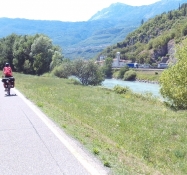 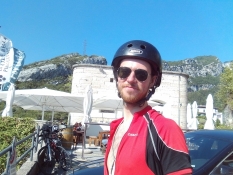 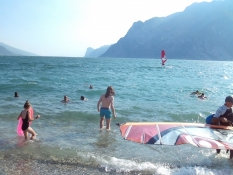 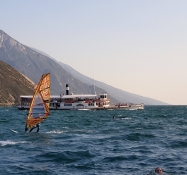 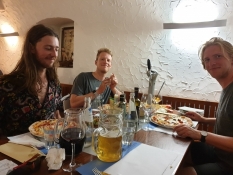