Sunny and very hot. 37-38°C. Light to moderate headwind heading south, i.e. most of the day.

The final stage to the finishline in Verona. Comprised of three parts. First back to the Adige valley the same way as out of it, then the stretch along the Adige and the Biffis canal. Finally heading east into Verona's western and northern suburbs and up to the campsite Camping Castel san Pietro. 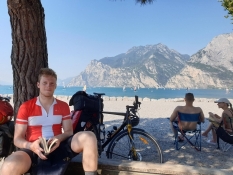 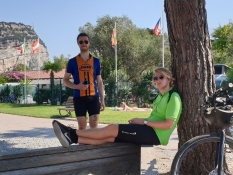 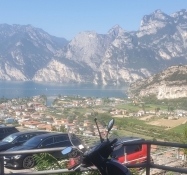 The seventh and last stage to Verona became a little hard for several reasons. It was extremely hot, a taxing climb up from Lake Garda demanded a lot and more climbs awaited us, the southerly wind, i.e. headwind did indeed slow us down, and the distance was also quite a long one. Shortly after our return to the Adige valley we had lunch. After that the peloton once again was dragged into a very long one. In these cases I always stay in the behind in a kind of one-man-gruppetto. But in the famous town of Rivoli (after an important battle of the Napoleonic wars) the peloton was gathered again in a nice outside café with splendid service of both dry and wet refreshments. So we kept on ordering with the sweet barmaid, so our bill grew uncomfortably large here.

Afterwards we had our bidons filled up for free, as we were in for a heavy meal up and down som rocky slopes. We didn't follow the river Adige now, but a separately running canal, the Canale Biffis. It ran in tunnels through the rocks, where we had to climb them instead. A bridge, where the canal and bike road spanned a small creek way down in a side valley had looked more impressive on pictures from below than it did in real life from above. We now were approaching Verona, but first we went through Bussolengo, where the peloton was almost smashed to smithereens. Even Simon and I, who for some kilometres formed a seldom pair, lost sight of one another, so he had to find Camping Castel San Pietro on his own. Here Susanne, my ex-wife and Thomas' mother, already awaited us, as she had stayed here for two nights already in a rented caravan. Our joy because of this reunion and, not the least, beacuse we now were able to dismount our iron horses and park them for a well-deserved break was enourmous and it was celebrated with a feast on the campsite outdoor kitchen, prepared and cooked by Susanne. I supplied the drinks, beer and wine from a supermarket down in the city in the last moment before closing time.

Our five tents (Susanne now slept in my old-old small pointed tent) were now lined up in Verona's old Austrian fortress, in fact a redoute, as the campsite is situated inside it. Quite funny! The worst thing was the heat. Temperatures didn't drop under 26°C during the night. Consequently, I didn't sleep well here, but lay bathed in sweat. 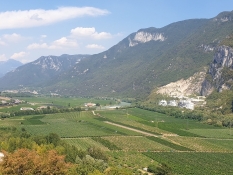 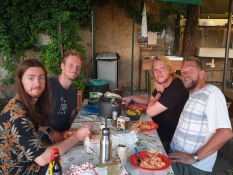 The next two and a half days we all enjoyed the sights of Verona by foot, including a visit to the opera in the Roman arena, sitting three and a half hour on a hot stone, listening to superb vocal perfornances without any acoustic amplifying. Really impressive! After lunch the third day Alexander, Simon and I bade Susanne and Thomas a warm goodbye before heading for the railway station and our long journey back home to Denmark. The two remaining guys looked forward to even five more days of sightseeing and touring the region, including visits to Lake Garda and Bologna. The day after the three of us would arrive very late, very tired and very hot in, accordingly, Odense and Aarhus. 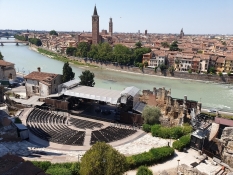