The last day along the Rhine with somewhat more tarmac than the previous two stages. But still mainly on gravel through forests along the river.

After another morningbath in the altogether (the last one) we pack and venture out on our last Rhine stage to Karlsruhe. This was the holiday's longest stage. We shopped a little at Helmlingen and Simon had a can of beef soup for lunch. We filled our bottles at a restaurant near a bridge across the Rhine, where I saw a peculiar vehicle. An elderly woman on an open tractor with a minicaravan on the hook behind it. Another way of spending your holiday. We fancied a dip, but the river was quite industrial here, so we cycled on and found an official bathing lake near Plittersdorf. After the dip we cooked coffee on the beach. There are more corners on the route here and it changes its track after two days of fairly straightforward going. Soon we had reached the westerly suburbs of Karlsruhe. The city itself was further to the east and the camp site even further to the east in the suburb of Durlach. As soon as we entered the city, we found a China grill and had dinner here. Now we passed the baroque centre of Karlsruhe with the castle as the hub of a wheel with circular streets and others radiating like spokes from it. Soon after we reached the camp site, but just before it I nearly collided with a female biker as I turned left right in front of her without looking back.Ooh, that was close. The camp site turned out a bit disappointing especially for the high price they charged here. E.g. there was no light in the nearest bathroom. 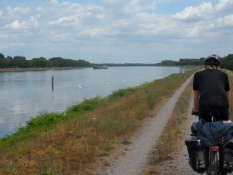 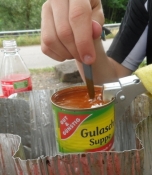 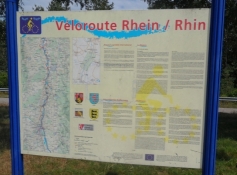 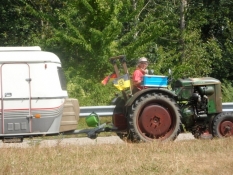 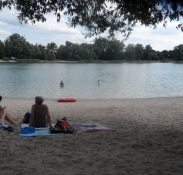 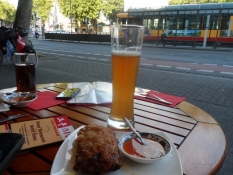 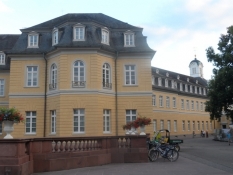