A lot of sunshine and only a few clouds. A short, light shower at sea. Light southwesterly winds, that means tailwind. Comfortable temperatures at about 22°C.

Minor roads and bike paths across Southern Als to the Soenderborg-Fynshav road, where Michael and I part. Wide road strip down to Fynshav. On Funen I rode my normal route via Millinge, W. Haesinge and Brobyvaerk. At Bellinge i went down to the gravel path along Odense stream. That turned soon to tarmac until Dalumgaard. From there a gravel path to Faaborgvej and along residential streets to the cattle show yard and via the stadium and Soehus path to Naesby.

The final stage of the Bike weekend with the bike trip home to Naesby. First from Hoeruphav, where we were put ashore, together with Michael, from Almsted alone towards Fynshav and home across Funen. 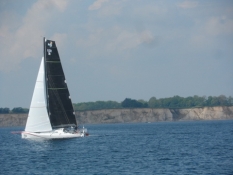 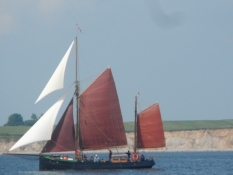 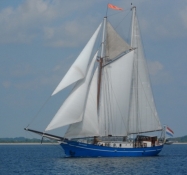 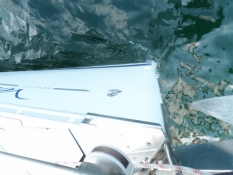 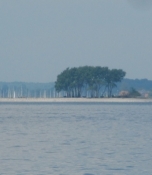 The day started for me, hearing my brothers rummaging around in the salon already. I must have slept well, although I was the first in bed at night. Bernhard is otherwise not exactly known as an 'early bird', but when he is master of Volare, he is a lot more ship shape in the morning. We all wanted to leave Damp not too late, as it was Sunday and working day tomorrow. Michael and I hoped to be set ashore on the island of Als, conveniently near to our respective homes, where we would go by bicycle. At the breakfast table Bernhard announced that Høruphav was the best place to part, even if it meant a detour for him to Gråsten. It was probably also the prospect of seeing Johanne's newborn foal that pulled him that day.
At any rate Volare pootled out of the harbour, while I was still standing in the boat's tiny cabin of a bathroom brushing my teeth after breakfast. So I did not switch on my GPS device before we were out in the Baltic Sea. Therefore, there is a straight line on the map, where it seems, we sailed right across the harbour's piers and docks.
Wind was very weak, so the engine had to spin all day, it turned out, as it didn't freshen later as on the outward journey. When motoring the boat goes around. 7-7.5 knots (13-14 km/h, or like a slow bike). If you speed up the enginge, the boat just dives into the water and speed increases only slightly, while fuel consumption increases dramatically. So Bernhard set a course up the coast with an expected time of arrival at Høruphav around 2pm. This would fit Michael and me nicely. Then I could easily catch the ferry to the island of Funen in Fynshav at 4 pm in order to make it home before 8 pm, when the polling stations would close for the European election, which was on today.
The weather was nice again and we met a lot of sailboats as they were on their way home from the regatta race that "Around Funen", which had been held the previous day with the goal in Bogense on North Funen. There were also several beautiful wooden ships and boats between them, and I think I got a few good pictures of some of them. Several of the other boats sailing on the same course as us, had set the spinnaker, in order to exploit the weak wind best possible. Our skipper folded it out too, but only very little speed was gained, and soon after he peeled it down again. In contrary to others, Bernhard does not like to sail with 'motor pace'. 'Either or' is his principle. For a while I was sitting right out in the bow in the so-called pulpit. Here you can sit on the railing resting your feet on the anchor. But it's definitely best if you are not too wide across the hips, so I sat there not long preaching to the gulls this Sunday morning. 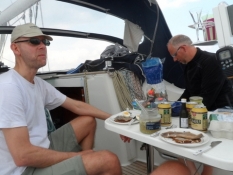 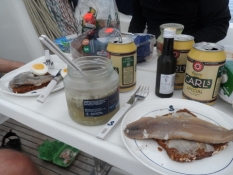 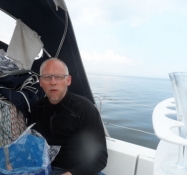 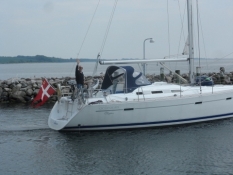 At a certain time we naturally grew hungry at sea, and so we looked forward to Michael's herring lunch. And likewise of course, beer and schnapps belong to such a lunch. Now Bernhard made us familiar with the slightly absurd rules for the consumption of alcohol at sea. The absurdity lies in the difference between the Danish and German rules, and this was quite significant, as we were sailing in the border waters between the two countries here at the entrance to the Flensburg Fjord. In Denmark as a skipper you just have to 'be able to keep ones vessel' or something like that. While in Germany a zero blood alcohol rule exists. So the Germans claim an absolute sobriety at sea! We even saw the so-called 'Entenpolizei' (duck police) hail a boat in the intention to embark on it, probably to make a sample on the strict injunction of sobriety was met by the captain. It was therefore not surprising that Bernhard wanted to be out of German waters before the scnapps bottle appeared on the cockpit table. He made his GPS show the Danish-German maritime border. We prepared lunch in the meantime. And when Michael had made it all ready, including hard-boiled eggs for those who were in for that, we were back in good old Denmark with its relaxed yachting rules. Cheers to them. For Bernhard would never abuse them sailing drunk across the seas. Oddly enough, rain began to trickle from above, just as we sat in the open cockpit and enjoyed our herring lunch. But we did not succumb thinking it would stop in one minute. Well, it lasted two minutes and we pulled a little under the canopy, but soon the rain was over. Perhaps it had better gone on, and had done the dishes after lunch, for Bernhard and I disagreed a little here. It was especially the late hour that made the dishes an 'issue', but Michael, the great diplomat, took matters into his own hands and did the dishes while I packed my junk together down in Johanne's cabin. Afterwards I dried the dishes, while Michael got packed and Bernhard steered Volare around the tip of the Als' southern peninsula of Kegnäs and into Høruphav where Michael and I were to be set ashore. So the dishwashing dispute was quite unnecessary and totally academic. Of course, it's a matter of getting things done in a hurry, especially unpleasant ones. When Bernhard had moored his yacht at a wooden boat bridge in Høruphav something more unpleasant happened. With all my panniers in the hands I forced the sea rail with one foot and put it down on the bridge, but stumbled with the second one and fell hard and heavy on the wooden bars. On the way down my chest roamed a bollard, so I squeezed my ribs and groaned in pain as I lay on my back and all my effects were scattered across the landing bridge. What an "elephant" way of getting off a yacht. Well, my brothers helped me up, and then Michael discovered another unpleasant thing. His bike was punctured. Well, misfortunes never come singly. But nevertheless it was now time to say goodbye and thanks for a great weekend together. Bernhard wanted to go home in a hurry and had to take into account the bridge operning times in Egernsund, so he chugged after that we had dismantled the bikes from the boat. Michael wheeled his bike ashore, while I very slowly began to recuperate, gather my luggage and mount it on the bike. When I was with Michael, he had just finished mending his bike so now we could ride out together the first piece over the Als to say goodbye to each other a little later.

But for now we went through over the Als, through Kirke Hørup and Mjang. Michael thought it was fun to keep track of how high up the ground we were going. After Gammelgård it rose, after Als standards, quite strongly up to Almsted, to as much as 65 metres above sea level. Here we chose to part as I would roll down the main road to Fynshav while he would steer his bike north to Guderup and Nordborg. Thus he would be home in about an hour. And I was down at the ferry in good time to make it for the four-o'clock-departure.
Back on the island of Funen, I stepped up, and had a good workout on my bike, especially up 'the three courses' in Svanninge hills. Up the 'main course' my chain had broke on the way home from last year's bike weekend, so of course I thought of that, but today the bike worked perfectly all the way to Odense and Næsby. I was a little busy, as I wanted to get home to cast my vote for the European elections. When I understood, I could easily make it as I again had tailwind (incredibly lucky, since I also had tailwind on the way out!), I chose to ride down the Odense river right from Bellinge. It is a cozy, but tortuous dirt road and I needed to wind down a bit before I took the final sprint through Dalum, past the cattle showyard and the stadium and out along the Søhus path.
I was home at half past seven and voted without problems, then I texted my brothers to announce my happy arrival home and thank you for a great weekend.