The first short stage of the bike holiday after bussing from Odense to Nykoebing via the Langeland to Lolland ferry. 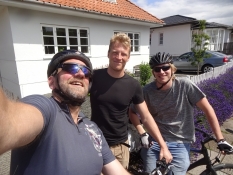 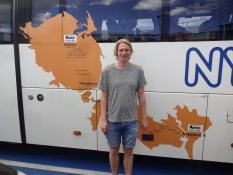 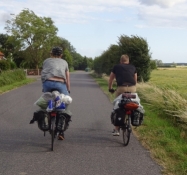 Something must I have done right as my adult sons, aged 24 and 21, had agreed in spending ten days of their summer vacation on cycling to Berlin with their father. You can at least say that I have created the tradition of an annual joint cycling holiday, but since 2012 we had not cycled together. Simon and I have had several long cycling holidays, most recently in 2016 from Wiesbaden to Amsterdam, while Alexander dropped out in 2012 when he left us for his home in Ystad and did not accompany us on Bornholm. However, I cycled a short three day trip with him to Hamburg last year. But this year it was like in the good old days, that is since 2001, when Simon was only three years old and sat in a bike trailer. The beginning of the trip I had planned as a rolling start. John's Buses would drive us to Nykoebing F, where our starting point was. There was no doubt that we wanted a classic tent holiday, but the last days in Berlin we were going to sleep at a hostel, where Simon's girlfriend would join us. Such were the plans when we trundled the 4 km from my house in Næsby to Odense bus station in order to load  our stuff into the bus's spacious cargo compartment. When that was done, we were able to rest our pins and make detailed plans for the next few days. Fortunately, the bus runs on board the ferry in Spodsbjerg on Langeland, so we had a good time for coffee there before it drove us across Lolland to Falster's main town. When everything was loaded onto the bikes again, we three musketeers set out on our fiery steeds  for the first short stage southbound to Gedser. As it was so short, my sons hadn't even put on bike pants. The fresh wind was blowing from the west, so we had side wind on Falster's southern tip. Before that we shopped a lot for food at a Rema supermarket in Nykoebing, so we could cook our dinner on gas cookers at Gedser nature school's tent site. We looked forward to this while following the nicely signposted cycle route, and at a little to seven we arrived at the large tent site, where there were shelters, composting toilet and a water tap at the nature school itself about 100 meters away. And there was a large dining pavilion, open, but sheltered against the wind. 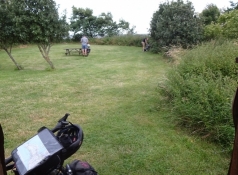 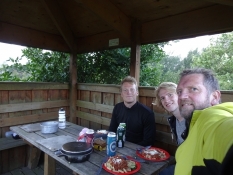 Hjemmelavet aftensmad i picnichytten/Self cooked dinner in the picnic hut 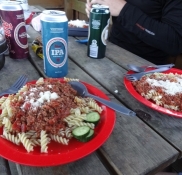 Fortunately, there was good shelter for the wind behind some shrubs, because it is unbearable to lie in a tent shaken by a stiff breeze. When they stood at a good distance from each other, it was time to make supper in the pavilion, and as we were well hungry all three, that was clearly what we all had in mind. And we revived the old tradition of making spaghetti with bolognese sauce the first evening. Today we are three tall and burly men, so a lot of food was needed, but fortunately we had two cookers as Alexander had got a Primus cooker for birthday gift. Prima. We had also bought two large cans of beer for each. One we emptied along with the nice large portions that soon stood on the table. It was cold for a July 1st so we put on some more clothes. After washing up at the wash basins besides the school, we cycled a little tour, 4 km each way, to Denmark's southernmost point. There is a nice cliff coast out there, and I also bathed just northwest of the point itself. The current was mighty strong so I didn't swim far out. Since I also bathe in winter, I have no problems with cold and wind. Alexander and Simon were waiting on the stairs down to the beach. Afterwards, we briefly looked at the exhibition about nature on Gedser headland. Birdlife in particular is extrodinary, but the seals on the sandbanks are also interesting. But as a matter of fact we quickly returned to our tent site in order to drink more beer and crawl into our sleeping bags. Tomorrow was not to begin too late as we wanted to make the Scandlines ferry at 11 from Gedser Ferry Port. 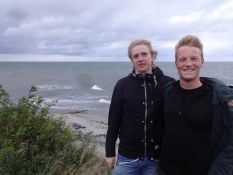