In the morning rain, later chilly weather with some sunny spells. Moderate winds from the west.

We chose to bicycle the long stage to Waren in stead of the short one to Krakow am See and thus make it to Berlin in five days.

The night and the morning in Schwaan were wet. Then you are not in a hurry to get out of the bag, but as this was a cycling holiday, and I did not want to drag the bike into the tent, I scrambled out to it and biked the short distance down to the beach for my morning bath. The river water did not look inviting with its green algae blanket. They had placed floats as a safety for the children, however, the still water gave the algae optimal conditions. I swam out into the river itself, and here the water was fresh. Afterwards, I served breakfast in the kitchen hut. It was very small, and while we munched the rolls I had bought at the campground's bakery sale, an entire school class arrived in order to bathe in the river. Now the flow barriers made sense. Because of the rain showers, the children wanted to go inside the hut to us, but they were not allowed to by the eagerly commanding teachers. And the good thing about bathing in rainy weather is that you get wet anyway. After breakfast it cleared up and we got the tents packed in reasonably dry weather. The wind had made them not quite wet. The first part of the day led us to the town of Guestrow, where we had to supplement our supplies. Shortly after Schwaan, we left the Warnow valley as our direction to the southeast did not match the course of this river. The price was the first serious climb of the cycling holiday, and promptly both my sons left me well behind. Dad is a turtle! But fortunately, it also had the GPS on the handlebars and thus knew which way to cycle. Because although the signposting is generally fine, it is still difficult to follow a route using it alone. Very easily you overlook a sign hidden by foliage, and then cycle for some kilometers wondering that no signs occur anymore. Fortunately, this is avoided with the Garmin, and Alexander, who cycles quite impulsively and preferably fast, has also recognized this, so he patiently waits for the GPS turtle to appear. Because it has indeed planned a beautiful bike route, he must admit. Towards Guestrow, it ran idyllically along a canal. Here were several table-bench sets, but our bread stock was down, so a supermarket was needed first. We found that on our way into the medium-sized town of Guestrow. Simon was already so hungry that he assaulted an Asian food truck in the parking lot while Alexander and I were shopping. The bread was freshly baked from the baker, but unfortunately I did not get it sliced so it was quite a challenge to do it myself with the "blade". This we called our only sharp knife that had lost its grip. On the other hand, I bought lard and malt beer, which is a luxury treat for me. The malt beer I poured into the bike bidon, where it definitely does not belong, and this way we cycled through Guestrow's picturesque old town center, where we just rounded the square and the palace, one of the Mecklenburg Duke's summer residences. Here we met the Dutch couple again, and indeed once again outside the town in a forest, where Alexander and I finally tucked some solid food inboard. Simon only ate a little less. His calorie depots are almost impossible to fill completely. I had almost bonked, so it took all my concentration and willpower to make sandwiches, also because there was no table, but only a bench that did not even stand horizontally. But there had been no tables for several miles. Naturally, some lovely table-bench sets appeared less then a mile later down to the bathing lake at the village of Schabernack. A funny name, because it means "hullabaloo" or "pranks" in German.

Der er maltøl i drikkedunken/Thereʹs not whisky in the jar, but malt beer in the bottle 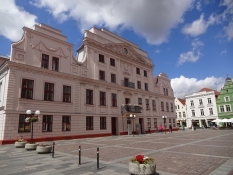 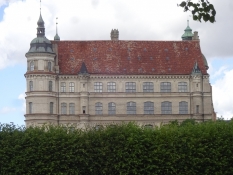 The best thing about the afternoon was the weather. It had cleared up nicely, and it was also a bit warmer down here away from the sea. One cannot overestimate the effect of the chill seas on our summer weather. One disadvantage of heat on the bike ride is, of course, that you start to sweat and regularly become thirsty. In Germany, it is not as easy to refuel water at the churches as in Denmark, because  here the offer is often rainwater. Fine and sustainable, because it is good to water the flowers with, but then cyclists have to do something else. When I'm in a country where I master the local language, I like to ask, for example, people who are in their garden if I may have some water and produce my bidon. I did that now, too, because we three cyclists had ventured a little into nature in order to avoid one of the many detours of the official cycling route Copenhagen-Berlin. It seems to necessarily have to round all villages and attractions rather than keeping the target cities in focus. So I had put in an alternative, shorter route. It worked really well here north of Krakow am See, also because my water tactics had been effective. When we arrived in Krakow, over ten kilometers shorter than on the cycle route, we therefore had water to cook coffee, what we did in the outskirts of the town right down to one of the countless lakes in the landscape aptly named Mecklenburgische Seenplatte in German. Lake plate?Well... Alexander was a live wire and didn't think we had time to cook coffee, but he had to succumb, also because Simon's sugar depots once again had to be refuelled with biscuits and cake. I pointed out that we had already gone further than my original six-day plan, which had just now become a five-day plan with longer stages. After the coffee break, idyllic stretches of nature followed along the lakes, but on very narrow paths. We enjoyed it rather than cycling along busy roads, and we looked at the map on how to shorten the route further. And chose this time wrongly, as the shortcut south of Dobbin turned out to be a very sandy stretch of forest trail. Furthermore, I was nervous about whether we could cross the Rostock-Berlin highway A19 in the forest, but that worked through a viaduct. Alexander, in particular, complained about the tough going, but he had participated in making the wrong choice. Afterwards, I teased him several times by saying we were to turn down a sandy forest path when the tarmac road turned a bend. But now we followed the official bike route again, and then he had the signs and did not usually need my guidance. In this case it was good that I still had biscuits in the handlebar bag, so I could lure him to a rest in the forest. Here I made another shortcut, this time not by forest trails, but by a fine asphalt road. My German bicycle map from German Cyclist's Association showed it so well. Here you can determine the road surface, which is definitely a very important factor in the accessibility of cyclists, while electronic maps have a clear shortage here in my opinion. Neither Open Street Map, its bicycle pendent Open Cycle Map, nor Google Maps show whether the routes run on asphalt or gravel. So we skipped Jabel and, back on the route again, we soon cycled along a perfectly car-free asphalt road into Waren, which was our goal of the day. At least in the first place for eating supper. We couldn't really warm to the idea of shopping and cooking it the campsite, which would follow four kilometers after the town. That's why we were looking for and found a pizza place in the center of Waren. And here we tucked into som serious food. Nothing makes as hungry as a cycling holiday. And the pizza tasted heavenly and the service was fine. I had very dirty hands, and although the business did not offer a customer toilet, I was allowed to wash my hands in a bucket provided with soap and towel before the munching began. 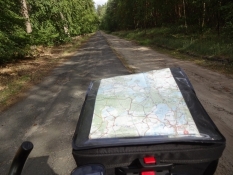 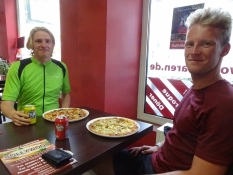 The town of Waren is the center of tourism in the Mecklenburg lake district and stands at the north end of the largest lake located exclusively in Germany, namely Mueritz. Only Lake Constance on the border with Austria and Switzerland is larger. Consequently, there are many campsites and the for Germans indispensible socalled "white fleet", the excursion boats, sailing them across the lakes and canals and rivers they are connected by. Of course, you can enjoy food, beer and coffee on board, all at very reasonable prices, and it is wildly popular in the summer. The touristical service in Germany is simply better, hence it is in higher demand. In Denmark, with our high prices (and wages), we keep that service at a much lower level. Maybe to the best of nature? Otherwise to nobody. We just left the tourist mecca of Waren and trod the last kilometers along a path following the lake to the Ecktannen campsite, of course at the lake Mueitz, but before it becomes really big and is called Inner Mueritz. The reception here was very professional and the site very well organized. We were, after all, in a German tourist area. This you have to adapt to and be well organized yourself. I forgot about that when I carelessly dropped all my luggage off my bike before making sure the other campers' access road was not blocked by our tents. And, indeed a fussy German came along announcing that he intended to leave the establishment very early in the following morning. Most awkward, really! Alexander and Simon had apparently already guessed the problems, left their luggage on the bikes and slurred off. This kind of thing happens when you are tired and just want your tent up in a hurry. Well, we pitched them in a special place only for tents. There wasn't much room here, but we managed to squeeze in. The service of this site was excellent, so we let the day ring out in the beer garden under big trees. "Biergarten" is one of the most beautiful words in German. Of course, we were told that it was soon closing time, and on which table we were to place our empty glasses after closing. Order is necessary. In these cases, I always miss a quiet place without (quite a lot of) people, where I've bought beer in advance and where I can just, with a Germanism, let the soul dangle. "Die Seele baumeln lassen". In my opinion, the Germans should do that more. But it's hard for them as they are so many and cluster together like here. Otherwise, there is plenty of room for everybody in the great outdoors. MeckPomm is also clearly the thinnest populated German state.