Sunny but chilly weater. Moderate to brisk easterly breeze and thus a headwind. In the evening just weak winds.

The second day of the four-day-introduction to Klaipeda of the Iron Curtain Tour. Can also be divided into three parts. From Solbakken Campsite to Elsinore (xx km), from Elsinore to Helsingborg (ferry) and from Helsingborg to Maglabykärr (xx km). Mostly on minor roads, a nice tarmac bike path into Hilleroed and on bike roads along the Coastal Road to Elsinore. In Sweden i rode on bike lanes out of Helsingborg and on minor roads up into the hills of Soederaasen. Det last stretch was on a small gravel road.

Text message May, 2, 8.07. Dear lifeline. That's the name Susanne gave this group, I write to about my Iron Curtain Bike Tour. Everything has a humble start. But also very beautiful this morning. The suns is shining ong my tent on top of a cliff at the Ise fiord on a naturist camp site. So I had a skinny dip in the fiord and am now back in my sleeping bag with a cup of cofee. Yesterday I cycled here from Korsoer station in a strong headwind, but very sunny. Today my plans are to go to Sweden via Elsinore and the cross Scania on my four-day introduction to the former Iron Curtain, which I'll hit in Klaipeda, Lithuania. Today the wind is luckily blowing a lot less. Good conditions for the 105 km. Have a nice day. Hugs from H. 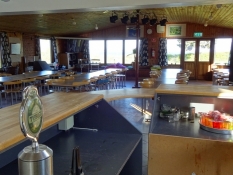 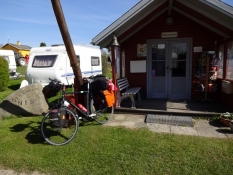 FB-post May, 2 16.58: Hi. A last post here from Denmark. In an hour's time I'm in Sweden an can only write here, when I can find wifi. After a skinny dip in the Ise fiord I got packed in order to cycle on eastwards, still against a brisk headwind. So things have to take their time, while I choose a low gear and crawl up the hills slowly, fx Stroe mountains. So they were called on the map! 4.6 km/h! It's good I have 27 gears to choose between on my lovely touring bike. She's slim and lively. If it wasn't for the 35 kg of baggage, I've loaded her with. She's rather a heavy girl now. But my legs feel good. To find my way I've got a Garmin Oregon GPS device. The whole route, 3760 km is drawn into it in advance. Then I just follow a magenta coloured line. It shows also the actual temperature, elevation, compass direction and a lot of other useful and useless features. Tonight or tomorrow morning I'll send a group text message from Maglabykaerr, which is a small lake in a forest in the hills of Soederaasen in Sweden. Bye bye. The photo is from my coffee break in a wood having passed through Hilleroed. Hugs from your cycling H 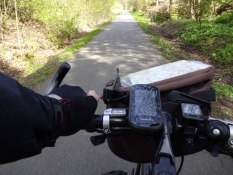 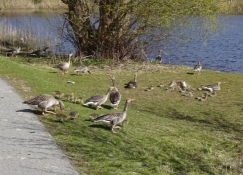 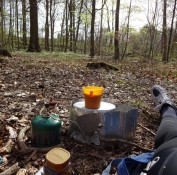 My ability to predict today's wind strength in the morning, lying on my back in the tent, pithced in as good shelter as possible, is mildly put miserable. The wind had not settled at all, but blew at least as strong as yesterday. In addition, it had turned slightly up north, so it was headwind all the way to Elsinore. So it literally took all day. But on the other hand, I had the whole day to it. There was just the continuation in Sweden, where I planned to go to the forest lake of Maglabykaerr in Söderåsen, 26 km from Helsingborg. And before I reached it, the day had turned into night here in the beginning of May. In addition, my beloved super bike lamp had stopped to work already when I was at home. I should have replaced it then, but could simply not do it, as it was so good. But fortunately I had bought a new lamp in a bicycle shop in the pedestrian street in Hillerød. It was a little difficult to find the store, even though it featured on open street map's bike map on my mobile phone. I do not do everything in the smartest way when it comes to electronics. The trip over Hornsherred and into Frederikssund had been a hard job in the headwind, and it got only worse after I had had lunch on an abandoned football field in the sunshine as the landscape grew rather hilly, even mountainous! Yes, it said Stroe mountains on the map. After a little detour into Freerslev hegn followed a nice cycle path on a disused railway right into the center of Hillerød. Here I spent some time at the cycle shop and afterwards shopping in a supermarket after a steep hill past the hospital. Now, I really needed a coffee break, and I had it in the wood of Grønholt hegn. To sit in the open forest floor and let gas cooker and coffee glass transform water into coffee was a pleasure. A girl on a horse rode by and said it looked "hyggeligt", a Danish word for pleasurable. I responded "you too", as this equipage was quite a beautiful sight in the sun. When I soon after crossed the main road of Kongevejen, I was almost run over. A truck was turning off and I thought it was safe to cross the road. But there was a passenger car behind the truck, which I had not seen, and the woman at the wheel looked horrified at me. I had to look better if my trip should not end very early. The last piece along the Strandvejen from Humlebaek to Elsinore was also a pleasure. I tanked water at a church and shopped for dinner in a cute little grocery store. I feared that the store in Mörarp shortly before the finish was shut before I reached it. I did so at. 9pm, when it was just closing. In the harbour of Helsingborg, the gps device had puzzled me. Sometimes I do not read the display properly, and it must have looked strange to onlookers. The clock was already half past seven. In addition, the route through Helsingborg was closed in one place and in another I left the route when I forgot to look at the display. And then I went sugar cold too! A little rest at a factory and some railroad tracks with energy drink and chocolate quickly made me up again. The wind had settled and I went at good speed eastwards now. The challenge came with the increasing darkness, as the liamp had to be unpacked, batteries had to be put in and then it switched itself off every minute or so. I did not fancy to mount the bracket, so I held it in my hand and switched it on every time it had gone black after a minute or so. "Jobbigt", as the Swedes say. It means "labourous". In addition, I ascended quite steeply uphill into Soederasen. But now I was close to my goal. I had researched on Google Maps in advance and found that there was a small forest lake to the right of the gravel path very soon after its start. Then I did not have to cycle all the way down to the lake of Maglabykaerr itself. This lake was also free of skiers here for my skinny dip. It was a perfect spot for forest camping and completely quiet. There was only this damn self-extinguishing cycle lamp that made the tent pitching a little problematic. But then I could take a bath in the lake. It was really not my desire, but I have a principle never to crawl unwashed into the sleeping bag after a biking stage, so I could only lay down in the water and splash around. Afterwards I took all my night clothes on and slipped into my sleeping bag to cook me some chili con carne for dinner. The clock was almost midnight before I crawled out to brush my teeth by the lake. It was a beautiful night and I was completely alone in the big forest. But it was pretty cool, so I hurried back into my sleeping bag and goodnight to me. 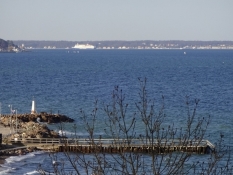 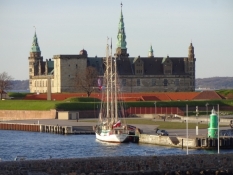