Sunny and warm weather with a few clouds, 20 to 22°C, in the evening quite chilly. Weak winds from East and South.

The first day of the second part of the Iron Curain Tour, the five days from Klaipeda to Riga. It's the first part of the Tour proper after the introducional part from Naesby to Klaipeda.

Text message, May 5, at 8.06: Good morning dear lifeline. I'm lying in my berth on Athena Seaways, which has sailed me to Lithuania in the course of the night. The other passerngers in my cabin speak Lithuanian with each other, so now I feel myself totally abroad. Excited! The cycling business yesterday was again "jobby", as the Swedes say. A strong headwind, which also made the ship sway, but the plaster against seasickness behind my left ear kept this problem at bay. In Klaipeda I've got the address of a bike repair shop, where they hopefully can adjust my speed shifts. I've fiddled with it myself, but I've only made things worse. That done my journey up North begins. Before night falls I'm in Latvia on a camp site on the very beach of the Baltic Sea. Here in Lithuania there's said to be a good cycling route along the coast through the holiday landscape. Now breakfast is waiting here on the ship. Have a nice Friday. Hugs from Helmuth. 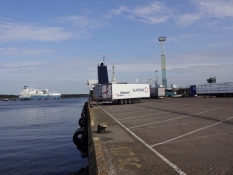 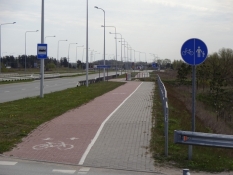 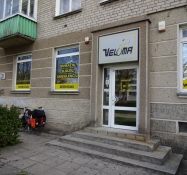 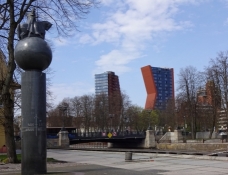 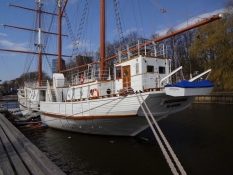 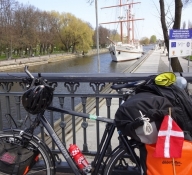 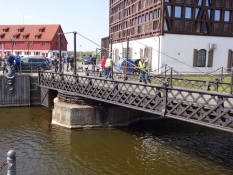 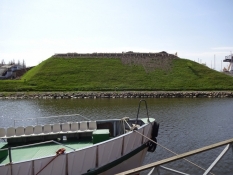 Those were my thoughts while approaching the Lithuanian coast and the former "Iron Curtain", which was the theme of the whole bike holiday. As Lithuania had been a part of the Soviet Union like the other Baltic republics, before it fell apart in 1991. The following two weeks I was to cycle through all three countries and get an expression of, how the balts see their position between the West and East, so to speak. Because although they are all members of the EU, the euro zone and Nato and thus politically belong to the West, in a geographical sense they are in the East. And the relationship to the big eastern neighbour is by no means unimportant. The fact alone that I spoke Russian with a Lithuanian here in the cabin and with many other balts in the coming weeks showed clearly that Russia is close. In many ways. Well, for now it was a matter of getting dressed and hurry to make breakfast. A bit late I realised that it was an hour later in Lithuania as in all other countries on my itenerary. Actually, I only turned my wrist watch an hour back at the Finnish-Norwegian border some six weeks later. During summer there is no time diifference to Russia, as they don't have daylight saving time there. So I got up a bit late and had to swallow my breakfast quickly in the ship's restaurant. Here I parted with Armandas, wishing him a happy wedding. Afterwards i descended to the car deck, where the lorries occupied a lot of space. I was in doubt whether to let them all go first, but as I got no signal to go, I used a very slowly going lorry in reverse gear to slip out on the quay. Now the country lay open before my front wheel and things could begin to happen. And I immediately felf myself welcome in Lithuania with nice bike lanes along the roads into the city centre. Klaipeda is the country's third biggest city after the capital of Vilnius far to the East and the old main city of Kaunas in the middle. It's the only port of the country, so it's very important. The weather was also very welcoming with just a few clouds, warm and quiet. I had no problems finding the bike repairer, who quickly fixed my gear shifts and lubricated it at a very reasonable price. I payed with my credit card as I hadn't found a cash dispenser yet. This was possible all over the Baltic states, and the Euro was the currency. This makes it a lot easier being a tourist so you don't have to change money at every border. Now I was close to the city centre where I parked my bake at the railings of a bridge across the river Dane. Another sign of welcome to me, being a Dane! Now I fancied a look at the city by foot. First a big sailing ship on the river caught my eyes. It proved to be the former training ship Meridianas. It was built in Finland as a result of the peacy treaty between Finland and the Soviet Union, which stated that the Finns had to deliver a number of ships to the winning power of the war. In the beckoning cobblestone lanes of the old city I could easily feel the predominant German influence on it. Before Word War I, in fact until the Versailles Treaty went into power in 1923, the city's name had been Memel as a German city. Lithuanian influence had been strong, especially while the country was united with Poland in a strong alliance, but so was the German baronial order with its stronghold Memelburg. I saw the castle bank, where they have plans to rebuild the castle. Seemingly, they had started because it was fenced off with a building site fence. A beautiful old swing bridge across a harbour stream was very picturesque as was a bronze well on the theatre square. I really enjoyed strolling through the old town to the quayside and the ferry across the river to the Curonian spit, a very long strip of sand, which is now divided between Russia and Lithuania. The fact that the Russian region of Kaliningrad is a Russian enclave and thus requires a lot of bureucratic approaches makes Klaipeda a lot more attractive in this region and economically it's a driving force today. The city also made a clean an well-groomed impression on me with its cosy cobble stone streets, restaurants and sculptures. I noticed an old warehouse, which was host to a brewery called Memelis, clearly a hint to the German name of the city. Culturally it remained German until the end of World War II, when the German inhabitants fled before the Soviet troops, who conquered a nearly empty city. Many Russians moved in, but have later moved out again, so the city today is predominantly Lithuanian speaking. This I could hear while I enjoyed a cup of good Italian coffee and a huge cupcake in a cafe near the bridge with my waiting bike. I like to eavesdrop on conversations in totally unknown languages. It's very relaxing and interesting in its very own way and it gives you the feeling of being far away from home. 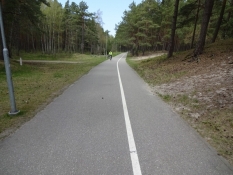 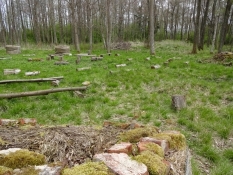 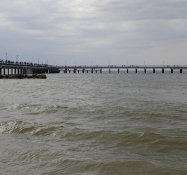 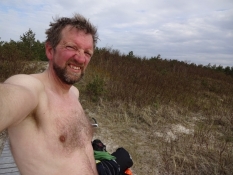 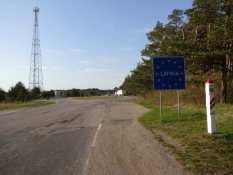 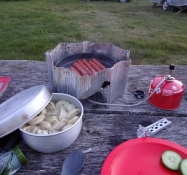 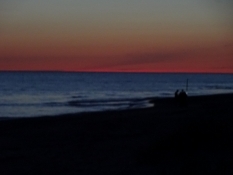