The first day of the Iron Curtain Tour's third part, the six days from Riga to Tallinn. The planned stage goal was a nature camp site on the shore of lake Astere, some 15 km north of Limbazi, but sandy roads and a detour around a private property delayed me, so I just made Limbazi.

FB post, May, 11 at 11.28: Hi folks. Now it's good-bye to Riga and Naughty Squirrel Hostel. It's been a lovely stay here in a beautiful old city in a totally relaxed and cool hostel. They did my laundry yesterday. "Just pay 6€, than we'll fix it for you", I was told. Nice, because then I could spend the day on funnier and other practical things like having a new mud gear fixed to my bike and another adjustment of my gear shift and lubrication of my chain. Did shopping for a gas canister as well. Without coffee my engine will stop. And then it was time for sightseeing in Riga. The pictures i posted yesterday. First i went up the tower of the St. Peter's Church with a lovely view in the clear as glass icy air in the sunshine. The massive church, well, smaller than it's namesake in Rome, looked like the massive medieval large brick cathedrals of the German Baltic Sea cities, and the architecht was indeed a German. As a whole Riga gives the impression of a mix of German and Nordic culture. That makes sense, since the German baronial Order and the Swedes kept a stronghold here for long. The Russians also ruled here for several centuries, but Russian is only present in the spoken language on the street, but not in the buildings. An exception is the Academy of Sciences. A Stalinist colossus in wedding-cake style like Moscow's university. I also visited the Domas cathedral but was disappointed that one of the worlds most staggering church organs was taken out for restauration. After a café latte in the sun (in full winterdressing it was possible) I strolled through the old fortification belt, which now forms a lovely park past the Freedom monument with a guard of honour to the Occupation Museum. It tells the sad story about the Soviet and Nazi occupations 1940 to 91. The most impressing thing was the picture of the human chain from Tallinn via Riga to Vilnius, in which more than two million Balts held each other by the hand i 1989 to mark the 50 years anniversary of the Hitler-Stalin-Treaty, which decided their fate for 50 years. Thousands and thousands again fell victims to unspeakable atrocities. So it was a relief to go outside into the cold and the sun again and walk through the art nouveau district. Really well preserved and a delight for fans of art nouveau. From there I went back to the river and past the castle Rigas pils. Pilsner? Yes, please. Now it was evening and I had quite a few in a taste of 13 different Latvian beers plus a teaser, a Somersby cider. Whut?? But it's typically Riga. Surprises a lurking everywhere. An American bar in retro style with live rock from the Fifties was the end of the day. Apart from some socialising af the bar of the hostel. But now I hear the bike calling for me. My stage goal is a lake 15 km north of Limbazi, where I intend to camp "wildly", in the nature. 109 km in light headwind, so it seems. It's cold and sunny. That's okay for me. As long as the roads are okay. No sandy pists and kilometer deficit, please. Good winds to all of you. In six days I'm in Tallinn and have access to wi-fi again. So long. Your cycologist Helmuth. 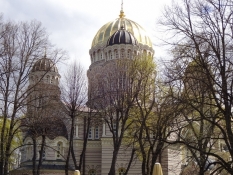 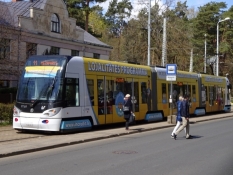 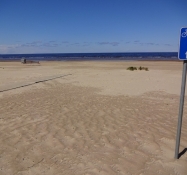 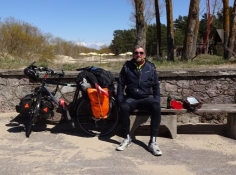 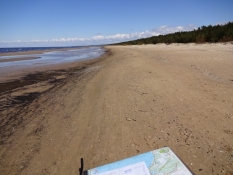 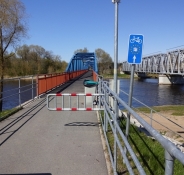 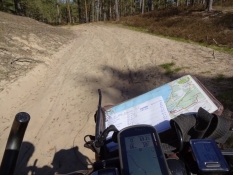 Igen en sandet piste, hvor jeg måtte trække/Again a sandy pist, where I had to wheel my bike 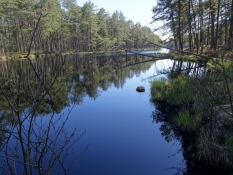 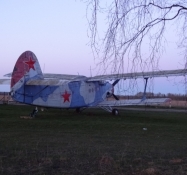 En AN-2, et gammelt sovjetisk bi-plan/The AN-2 is an old Soviet biplane

Text message, May, 11, at 22.55: Good night from the ice cold Latvia. I'm lying in my sleeping bag with all my night clothes on. But it's going to be long before my feet are warm even with Susanne's home knitted socks. They've been truly indispensable in this cold wave. After a lovely rest day in Riga with many exciting things and lots of companions at Naughty Squirrel Hostel in the old quarter I have once again spent a day on Latvia's worn down roads. First slowly out of the city on bumpy paths, where pedestrians were many and had right of way. When I hit the sea, I had lunch and went on on the beach itself. After 6 kms of good riding I encountered deep sand again. After that a sign saying "private" and a fiercly barking dog sent me on a long detour. At last I went on the Riga-Tallinn main road, before I found back to my gps route. After my dinner, chicken soup with noodles on the gas cooker outside a closed camp site I speeded up in order to make an open shop in Limbazi and find a spot to pitch my tent. Time was on my side, until the road suddenly turned from good tarmac to coarse, deep and crazily bumpy gravel for 7 km. Then it was impossible. But I've pitched my tent not far from the shop. Water I had at a night open pharmacy. But this lake I can't bathe in. So I had to let go of my principle not to creep into my sleeping bag unwashed. Tomorrow I'll cycle into Estonia, where the roads are said to be a lot better. My goal is the spa town of Paernu. But more kilometer debt of about 17 km today makes it a long stage, 123 km. I'm heading for Tallinn now in six stages. Then I have a rest day there. Sleep well all of you. Your friend Helmuth.