Chilly and moderate winds from North and Northeast, so a headwind. Quite sunny, but also overcast for some hours.

The sixth and last stage of the Iron Curtain Tour's thrid part from Riga to Tallinn.

Text message, May, 16, at 8.38 Good morning, dear lifeliners. I've slept well in my new sleeping bag. My tent is pitched on a nice nature campsite down by the riverside, well-equipped with fireplace, which I warmed me by yesterday evening, covered table and benches and composting toilet. And the sun is shining, its windy and chilly. That's MY Iron Curtain Tour weather! The stage to this place yesterday wasn't long, 65 km on good roads in light headwind. Haapsalu looked a lot more frayed in the daylight. It was built as a spa town with Kursaal and sea front walk in Russian times in the 19th century. It really neads some maintenance. The episcopal castle was quite a sight. It's partly a ruin after a fire in the 17th century, but the church was in service. Here "The White Lady"  appears in a Medieval legend. At those times the castle was home to a pince bishop, i.e. a clerical and secular ruler in one person. In a certain period it was Danish, Oesel-Wiek, when Christian 3rd's brother Magnus was the last bishop, before the Swedes conquered Estonia in 1581. They let the castle fall into decay, and then there was the fire. Later Russias Peter the Great expelled the Swedes and Haapsalus time as a posh spa town begun. On my bike I noticed bilingual road signs in Estonian and Swedish due to a recognized Swedish minority. They live mainly on the islands of Hiiumaa and Saaremaa, in Danish Dagoe and Oesel. They're very idyllic, and it's a shame to go past them, but I've got other plans. Today they are to make it to Tallinn, where I've booked a hostel and have a rest day tomorrow. I'm looking forward to it. Tallinn means 'Dane castle'. So my Danish flag on my bike must be appropriate there. As you'll  know it fell from the sky there, according to a legend, in 1219, June, 15, Valdemar day, after Valdemar the Victorious. But first I have to go there, about 100 km along the coast to the east. That direction I'll keep all the way to Saint Petersburg. So westerly winds would be welcome. Best regards from the cycologist Helmuth. 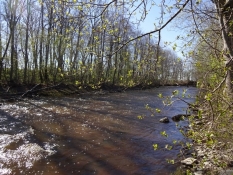 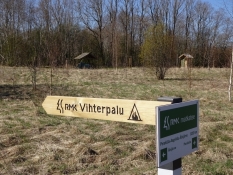 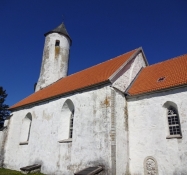 Inde i klosterkirken i Padise/Inside the abbey church of Padise 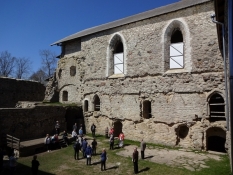 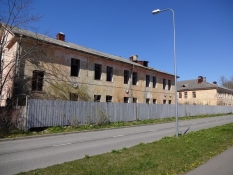 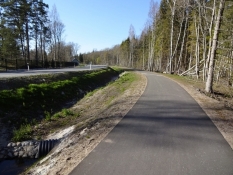 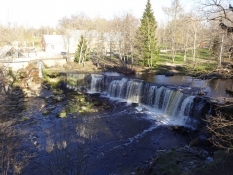 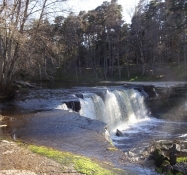 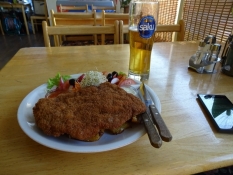 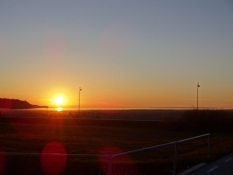