A quiet, overcast day, not cold, not warm. Actually, quite featureless weather.

The first stage of five of the Iron Curtain Tour's fourth part from Tallinn to St. Petersburg.

FB post, May, 18, at 9.15: Good morning from Tallinn. I totally forgot to take pictures with my mobile phone yesterday out of my affection for the beauty of the city. Even if I should be able to transfer pictures from my digital camera, where I've got lots of them, I doesn't work. So find pictures yourselves on the internet, if you want to 'have a look' at Tallinn. And there's a lot to see. First I had some practical matters to solve, e.g. a haircut. It took a long time in embarrassing silence, and that wasn't easy for me, but the lady spoke only Estonian. But the ram was sheared AND had his beard trimmed, so he doesn't look like a Taliban on bike holiday.

The sightseeing I began on Toompea, the cathedral hill, which soars above the low part of Vanalinn, the old city. And Tallinn has indeed a very well preserved medieval centre. But first I had lunch, herring in Estonian style on a lovely and peaceful kohvik, café. Yes, I had coffee as well, and then I was ready. First I entered the cathedral, which seemed massive inside, almost like a fortress. A large number of sepulchral tablets on the walls were striking. The building was begun shortly after the Danish conquest i 1219. The Danish king, probably Valdemar the Victorious, has got his own garden right at the city wall with a nice view of the city below. In the Virgin Tower (actually is was a prison for prostitutes!) there was a little museum, and I had explained, where precisely Lyndanise and the battlefield, where the Danish flag fell from the sky and turned the war luck, was situated. Well, please turn down the nationalism. It must, after all, have been an imperialist conquest in the same style as Napoleon's or Hitler's. But it is indeed a beautiful legend. Right next to stands the castle with the Estonian parliament Riigikogu. I spoke with a very knowing and friendly lady, who told me a lot about Estonia, I didn't know. Russia was absolutely not her favourite, as she wasn't for the group of demonstrators in front of the Russian embassy, who in English and Estonian shouted anti-Russian slogans and waved Ukranian and Estonian flags. Europe had to wake up and stop Putin in Ukraine, was their message. The same statement I heard at Oelleklubi Brewery, where I had my supper. A (small, but tasty) steak. Afterwards I had a good chat with three young Estonians and their business aquaintance from Hongkong. The girl was of Russian ethnicity and told about a youth, marked by teasing remarks and harrassment. The others were quite opposed to Russia and consider Putin a threat and aggressor. I tried to make my points clear, but they considered me, in the friendliest way, a lucky bastard from a Western country with no idea of the implements of occupation. Stalin was much worse than Htiler, was the tenor. Well, well. My age and experience they did respect, especially my background as an interrogation officer in the Danish military in the eighties. It grew late before I trudged off into the dark. Do I need to tell you that the beer was delicious and I had five or six different ones? Before my night rest at Alur hostel I had a nightly stroll to the harbour. Despite the darkness the really huge and hideous concrete monster of an entertainment building was obvious. It was built for the Olympic games in 1980, when the sailing competitions were held here. Now the concrete is crumbling. It reminded me of the German concrete pillboxes at the North Sea in Denmark. The droppings of totalitarism.

Today I remount my iron horse and go about 100 km to the East along the coast into the national park of Lahemaa. I now venture into the Iron Curtain's fourth part, the five days to St. Petersburg, three of them in Estonia. I'll be back from Narva, shortly before the border to Russia. Warm greetings from your cycologist Helmuth. 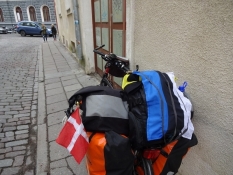 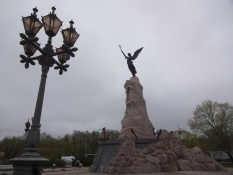 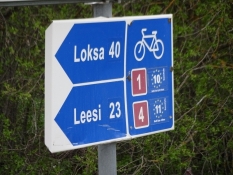 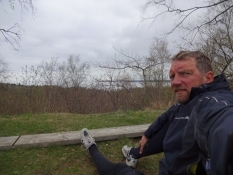 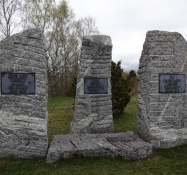