Yet another rainy day throughout. Light tailwind and quite warm.

Finland really starts to show its teeth. The choice is between state highway No 9's (Ysitie) narrow sidestrip being constantly overtaken by very fast traffic or gravel roads along it. They constantly change from one side of the road to the other, are in between covered with bad og newly dumped gravel and sometimes go rather far away from the highway, which means the shortest possile distance to the goal in Jyväskylä. I try to find a compromise and succeed okay, but it is a mix of everything. The terrain is fairly hilly. Give up the gravel road once as it is to deep and find the main road. Good road through and after Jämsä and also the last part around Muurame and into Jyväskylä.

The last day of the second Finnish part. That meant that the stage goal had to be Jyväskylä. Immediately dropped the idea of going the detour via Halli and went a zigzag course on and around highway No. 9. The shin splints cost a lot of pain and I know I have to solve the problem soon. Up and down hills all day. And rain throughout the day. So not the easiest of stages. On top of that my mobile phone gets wet and fails. In Jyväskylä I can't find the camp site which turns out to be dismantled. Then it's the city hostel, which does me very well. Dinner cooked in the hostel kitchen. 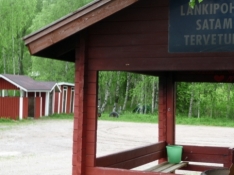 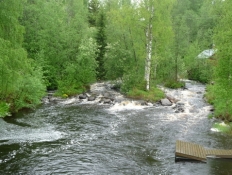 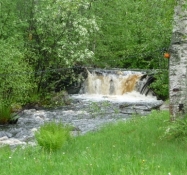