Lots of rain all day long. Only in the evening it stopped raining. Very cool indeed, even cold June weather.

I followed the excellent bike path system out of the city signposted to Haukipudas. After the town of Ii the roadside bike stops and I have to go in the traffic. To, three times I choose detours along gravel roads away from the main road. Once I end up in a close in a newly built residential area. The traffic on the main road is bad, but not life endagering. So I go on, until I take a good, quiet road to the west after the village og Simo. Back on the main road I find good following tarmaced roads nearly all the way into Kemi. In Kemi on bike paths along big roads and at last residential streets down to a deserted, as still closed camping site.

The first stage of the fourth Finnish part, the two-day-stretch from Oulu to Rovaniemi. After breakfast I parted with Pekka and Päivi and left northbound into the pouring rain. Had lunch in a large empty restaurant while hoping for better weather. But no. Coffee break at a petrol station at the main road north of Ii. Looked in vain for a restaurant in a small fishing harbour at the Gulf of Bothnia. I ended cooking soup near a church nearby. It was cold, but the rain had finally stopped. Afterwards I went another long strip into Kemi, where the camp site was still closed. I pitched my tent anyway but had to take a bath in the cold sea. It was very cold and it took some time before I was warm in my sleeping bag. 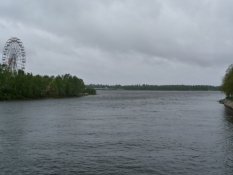 Her er jeg stadig i Oulu/Iʹm still in Oulu. 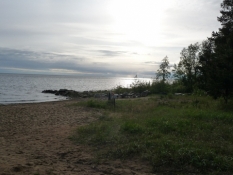 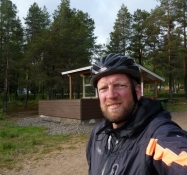 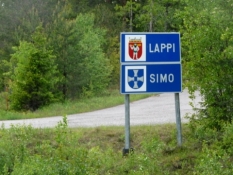 Endelig i Lapland/Finally in Lapland 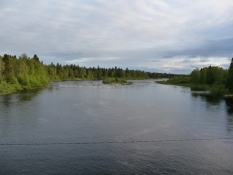