In the morning light rain, later overcast, and in the afternoon and evening warm and sunny weather, up to 22°C. More windy, up to a moderate breeze, from west and south.

Gravel paths along the western shore of Lac de Madine. Minor tarmac roads up to and down from Butte de Montsec as well as up and down the hill of Côtes de Meuse. After St. Mihiel a stretch on a (too) big main road without a bike lane, but then again fine medium roads with litlle traffic. The ending before Verdun was a trail with high grass through the meadows. I wasn't exactly praised for that one.

Voluntarily chosen detour up Butte de Montsec. Along the Meuse the river trail still misses, so I've composed a route  along the river myself. In Verdun I choose a route directly to the camp site bypassing the town.

My morning dip in the Madine Lake was my last and only chance to have a such in a body of water in nature, so I enjoyed it as much as I could. And luckily, I found a good place for having breakfast at a roofed table-bench-set on my way back to the camp site on my bike. And outside its reception I withdrew bread, croissants and baguettes, from an automat. This way I had never shopped for my breakfast before.

Alexander and Simon were not really awake yet, and heavy rain clouds loomed above our heads. But a comprehensive breakfast, which we normally treat our bodies with on cycling holidays, really makes a difference. And after a quite cumbersome checking-out procedure with a very unexperienced girl in the reception we cycled along on the western shore of the Madine Lake. I had read about it as a party lake mainly for German teenagers, but it seemed to me as beautiful and peaceful nature. It had been designed artificially in the sixties, as the ground was swampy and made poor agricultural land. During World War I, when the frontline for more than four years ran just where we were riding right now, it had been one of the worst places to be deployed to. Perhaps not because of the fights, but because of the problems, the water caused in the trenches. The much feared trench feet were commomplace here. That's what I thought about riding along the lake, which, consequently had not existed at these times.

Our next sightseeing goal also had this war theme, as many following on this trip. This was the American war memorial on Butte de Montsec. It's built as a Greek round temple on the top of a hill, and is seen from far away. Here the American soldiers, who fought in the battle of the St. Mihiel Salient, are commemorated and honoured. Later we would visit the town of St. Mihiel. This battle in September 1918 can be called WWI's decisive one, as Imperial Germany after this defeat only retreated. For more than four years the Germans had held and heavily fortified this advanced position, including a bridgehead on the left bank of the Meuse, but much farther they never made it after numerous attempts and French counter attempts to reconquer this land with several strategically important hills. Butte de Montsec, where we stood now, had been one of them. But when the Americans entered the war with their enourmous industrial power and, consequently, also fire power plus several hundred thousands of soldiers, today one would say "boots on the ground", they made the difference. And forced Germany to sign a ceasefire on November, 11, 1918. But not without suffering terrible losses, both here at St. Mihiel, but also further north in the Argonnes, where the last battle of this war was fought. The US lost more than 100.000 soldiers in Europe during the First World War. These losses the Americans commerate with great solemnity, one has to admit. Yesterday we had stood outside the military cemetary of Thiacourt-Regniéville, where many of the victims, commemorated here, are buried.

In the village of Montsec I glanced into a hall, which the Germans had used as a bakery during the war. Here they had felt at home for four years, as they had conquered the salient all the way back to September 1914.

But for us it was now time to negotiate the first hard climb of the cycling holiday, constituted by Côtes de Meuse, the low mountain ridge on the right bank of the Meuse. Before that I had to replenish my sugar depots with muesli with water, as I had felt in low spirits in the headwind. Luckily, the climb was soon over, and now it was downhill into St. Mihiel. 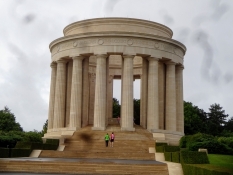 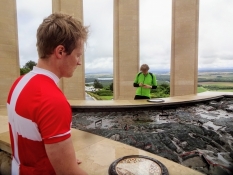 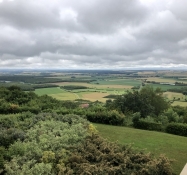 St. Mihiel is a stately town, perhaps a little worn down, with a large old church and a large monastery attached to it, which they say is home to a marvellous library with written testimony all the way back to early medieval times. This, however, did not have our interest, as we looked for a place to shop for lunch. You must nourish the ideals, which you support. And feed the biker, one would like to add. After the shopping we looked for a place to have our big feast and found a very apporopriate one on the banks of river Meuse. After all, this stream was going to be our true companion for almost two weeks and almost all the way down to Liège. Before that I dropped my right front pannier, which chocked me to some extent. I had to buy some plastic strips, as riding with loose panniers could be dangerous in the traffic.

Lunch was taken in in high spirits. The rain clouds were blown away and the sun was out. Moreover, a brisk wind blew in the right direction, from the south, as we turned north now, down the river. It couldn't be any better.

After the opulent lunch we did not go far, before we found a new occasion for a break. This time we stopped at the French military cemetary on a low hill down to the river. Hundreds of white crosses were placed in perfect lines. A national necropolis, a city of the dead, it was called on a sign. The bravoury of the French defenders had surprised the Germans. These had expected that after a few heavy defeats in the beginning of the war they would surrender quickly. However, they didn't, and their allies, the Britons, held the lines with likewise bravoury further to the west. A horrible contest about industrial and military power on the cost of millions at the front and behind it was. The worst hour of imperialism, one can call it. And a little more than twenty years later it all started again with another world war. When will we ever learn? The answer is blowing in the wind. One likes to cite the poets of peace on places like this. Tomorrow, in Verdun, it would become even fiercer and yet more terrible.

The sun burnt down on us, and we were thirsty. Luckily, the cemetary clerk showed us a smart water pump, where you could turn a wheel to have cold, fresh water. Aaahh. 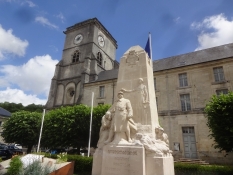 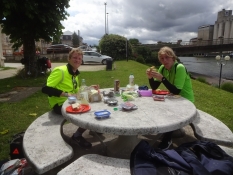 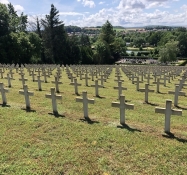 The road we now cycled on wasn't comfortable with its many fastgoing cars and lorries. Actually, the bike route went somewhat closer to the river, but my sons judged it even more uncomfortable, as it was a narrow dirt track lined by high grass. Luckily, it wasn't long before we lunged down into the valley, crossed the river and entered the village of Dompcevrin, where we found a nice compromise. As we from here followed the road northbound on the left bank of the Meuse, where the traffic was a lot lighter. We were in the French departement Meuse, where they lack the so-called voie vertes, the "green tracks", which are the tarmaced trails along the river, we would enjoy riding on in the next departement, called Ardennes. As long as we hadn't entered that, we cycled on medium roads as this one. And it was good. Of course, alså because we had a nice tailwind on it, but also because traffic was so sparse, that it was possible to let thoughts go astray and enjoy the passing landscape. Maybe, it was us, passing the landscape, but never mind. This says something about the easy mode of meditation your brain goes into, when cycling along an easy road. In fact, I love that brain mode. Perhaps it's one of the best things of tour cycling over all.

This stayed on until the desire for a cup of coffee pushed it away. In the village of Villers-sur-Meuse we tried to find a suitable place. We had supplied for water at a camp site and found a closed stall outside it with tables and benches in front of it. The sky was menacing again, and here we could creep under the half roof of the stall, but it stayed dry. Along with the coffee Alexander and Simon told stories about their fellow students and friends and I noticed that it hadn't become much easier being young in these "new times", which especially Alexander likes making me aware of, we're living in now, when my opinions seem a bit old-fashioned to him.

In the end we had to mount our iron horses again, as there were still some 20 km to go to our goal town of Verdun on the pleasant road, leading us through several sleepy villages and silent small towns. The French countryside seems a lot more quiet than the Danish one, but maybe that was our holiday mode judgment. As time passed, we looked forward to arriving on the campsite, pitching our tents, having a bath, having dinner and relaxing before bedtime. Those are our normal evening camping routines. 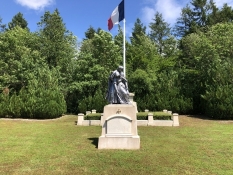 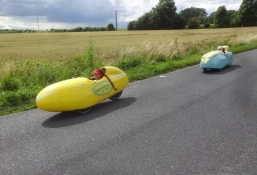 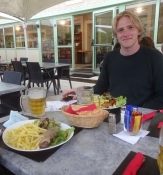 When this road to Verdun was so pleasant, then why on earth leave it voluntarily in order to tread through high grass on a meadow on a track that had almost vanished? Well, anyway that's what I did and made my boys do, as soon as we had crossed the Metz-Paris motorway. And I was consequently scolded badly for doing so, but at home in front of my computer this track had looked okay. However, here in the midst of the lush French summer plants grow rapidly. "This track hasn't seen a tractor for several weeks", Simon remarked. Well, luckily I can stand some harsh words, and after hard treading for about a quarter of an hour through the wilderness in the meadows we stood in front of the campsite's reception, ready to take in "Les Breuils", as the business is called. It means "The Enclosures".

Here in Verdun everything seemed well organized, in contrary to Lac de Madine, and we felt warmly welcome both on the tent pitch, where we easily shared one with our three small tents and thus save some money, and not less in the restaurant outside the reception. We chose to have our dinner here, and it wasn't at all a bad choice, not the least because the waiters kept on replacing our empty beer glasses with full ones. Moreover, we learned that we could watch the football match Italy vs. Spain, a quarterfinal of the European Championship on a large screen here tomorrow. Now we could look forward to that evening programme on our rest day tomorrow.

I had planned the day for visiting places where the big battle of Verdun in 1916 during WWI was commemorated. This was the reason I had planned a rest day here, but any other plan had indeed also been totally impossible. So we considered it a good day and were in good spirits for the next, when we slipped into our bags in our tents.