Warm and sunny weather all day. It's sweaty on the climbs. 23 to 24°C and just light winds, mostly from south, so a fine tailwind.

Still a self composed route. Out of Verdun on a fine "green path", Voie verte, along the Meuse, which we abandon to venture up a steep, stony forest path to the hill of Mort Homme. Afterwards good medium roads without bike lane and without much traffic. After our coffee break the canal path grows too bad and we escape to a fairly dangerous trunk road for som miles, before busy town streets in Stenay and a picturesque approach to our goal town of Inor.

Accommodation at the camp site Des Bouleux in the outskirts of the little town of Inor in the Meuse valley. 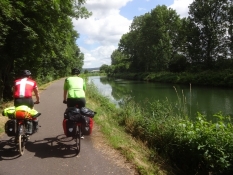 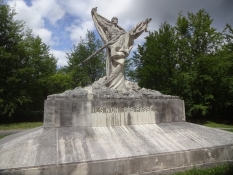 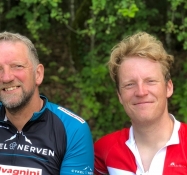 When I took down my tent in the morning one of the tent poles snapped once again, and I had to attend to a DIY centre in order to buy a short aluminium tube, a hacksaw and some tape to mend it. Consequently, we didn't visit the Peace museum, placed in Verdun's old episcopal palace. This town really calls out for peace. In stead vi visited yet another war memorial on the left bank of the Meuse, the hill of "Mort Homme" ("Dead Man") on our way north up the river. Indeed, they are two hilltops, which were strategically important and which, again under huge losses of life switched ownership a couple of times. These days there's a skeleton soldier in his cape with a flag as a monument on the woodcovered crate. On the pedestal it says: Ils non pas passé. They don't get through. In front of it we had our sandwiches on a bench in the sun and contemplated about, how it must have felt 105 years ago.

The next many hours we cycled on a medium size road with light traffic on the left bank without any attractions. But the sun was out, it wasn't too hot, and the wind blew our way. When the need for coffee appeared, and it always does that first with me, we couldn't agree, where to cook it. My sons don't like to sit in the grass at the roadside, maybe in fear of ticks, so we had to find a table and benches to this end. And so we did shortly after the village of Sassey-sur-Meuse. Soon after we ventured into some muddy and unpleasant trails in the meadows in order to avoid the main road to Stenay, which we nevertheless ended up on shortly before the town. We were well exposed to big lorries and speedy cars there. We just didn't want to miss Stenay, in which, by the way, the German crown prince had had his HQ during WWI, because they have a beer museum, Musée de la Bière, here. Luckily, not everything was about war on this trip. Especially my sons were gruided well into the beer brewing universe, and I admired the many rare and beautiful old artefacts. Of course, we ended our visit in the bar, enjoying some chilled and interesting pints. That done we shopped for dinner at Lidl. We intended to cook it on the campsite of Inor, where we were heading today. At eight o'clock Denmark was due to play its semifinal versus England at the postponed football Euro2020, and we were very keen not to miss it. Indeed, we managed to watch at the campsite of Des Bouleux, where they didn't speak English, but nevertheless understood that this football match was very important to us. They simply gave us a cottage at our disposal, where we cooked dinner and had it on the patio, before switching on the telly inside it. Denmark went ahead, but lost quite unlucky, but on the other hand also quite deservedly, just before kickoff, so the dream about the final stayed just that.

In the dusk we pitched our tents next to the cottage and crawled in to bunk it for some hours. 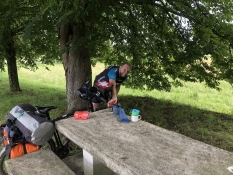 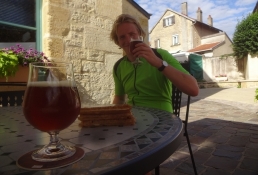 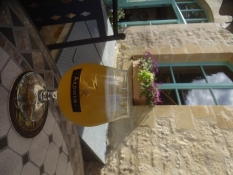 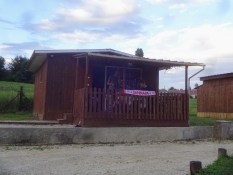 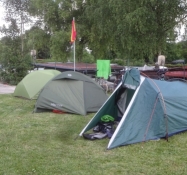