Mixed weather with both sun, clouds and rain. The latter came luckily during our visit of the castle in Sedan. Temperatures of about 20 to 22°C. Light winds.

Minor tarmac roads out of Inor. Very poor tarmac (route deformée!) up a steep hill out of Letanne, but luckily fine tarmac on the way down to Mouzon. Here the Voie Verte Trans Ardennes (The green Road Through the Ardennes) starts. This is a dream of a cycling path, which we follow for a day and a half. It's tarmaced, smooth and even, without  tree roots, it follows the river or the canal closely and is lavishly signposted. Yipee!

The planned route is closely followed, except in Sedan, where we cycle up to the fortress and down to the river again. In Charleville a map reading blunder on my behalf sends us past a set of stairs to a cycling path along a railway bridge, so that demanded a little detour. 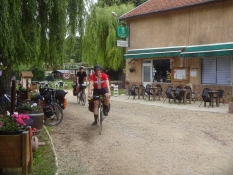 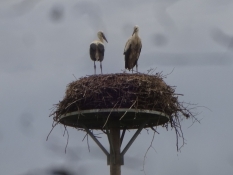 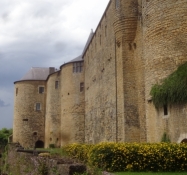 Today we were to cross the border between the counties ("departement") og Meuse and Ardennes. This seems totally irrelevant information, but it wasn't so for us at all, as the Green Path ("Voie verte") began in the latter. It can be followed into Belgium and there, of course under another name, all the way to the Dutch border and probably even further. In the morning our task was to its start in the town of Mouzon, and it took some sweating up some steep hills on bad roads and adventurous downhill going. But it was very calm in a very rural athmosphere. We made close contact to the agriculture of Northern France and said hello to a great many cows. Mouzon was a lovely and beautiful town, one easily could have spent more time in. It was situated incredibly charming down to the river and oozed with tranquility and charm. But for us it was the starting point for the bike route along the Meuse. On such a trail one's mind relaxes while the legs do the work. It's possible to hear the birds singing and at one place we saw a stork's nest with a whole family inside it. Our lunch we had on a bench next to the trail and the river. Our preliminary goal was now the town of Sedan with its enormous castle, actually Europe's largest, nothing less. It had been very important in the middle ages, but even in the French/German war of 1870/71 it had played an important part. Even more incredible is the fact that it did likewise in the WWII. During WWI the French had abandoned it without a fight. We stayed on the magnificent castle for a long time and were taken away by the exhibition. Especially a very large model of Sedan as ith ad looked in the 17th century impressed me.The artist had included som incredible details. The castle soars above the town and the Meuse valley. When we had arrived to it a hefty rain shower came down, but when we stood in the courtyard again the sun was out again and we cooked coffee and had an ice cream. A quick glance at the town centre of Sedan we also had and bought some candy. Afterwards we made good progress up north on the fine Meuse bike trail. My son Alexander was in high spirits and diverted us with all stanzas of the song "The Sick Note" or "Why Paddy's not at work today". Hilarously funny that was.

Our goal of today was the town of Charleville-Mézières. Before we quite reached it, my sons shopped for their famous risotto in a large supermarket in a suburb. I didn't complain and took a rest in the sun outside. On fine, albeit a bit troublesome paths and a splendid suspension bridge for bikers and pedestrians we made it to the campsite. After pitching our tents the boys immediately started cooking. All three stoves went into action in what I would call their finest hour of the whole bike holiday, as the food was unbelievably delicious. The campsite was badly run and not well managed. Everybody had to manage as well as they could. We ended the day by strolling into the centre of Charleville and its magnificent central square called Place Ducale. It's surrounded by totally alike beautiful old civil houses with lots of ornaments, small turrets and cornices. Naturally, there were many bars and we drank an improbable amount of beer outside one of them. 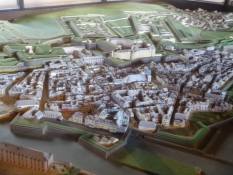 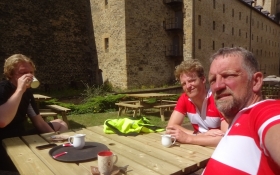 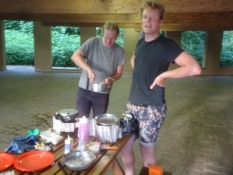 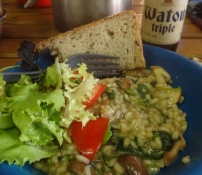 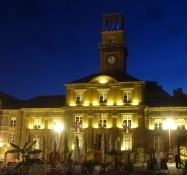 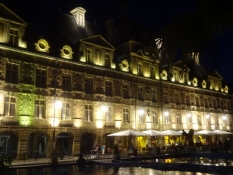 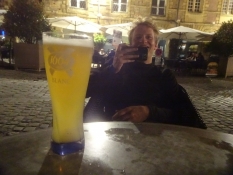