Dry weather all day long with a mixture of clouds and sun. Pleasant temperatures of about 22°C. Light winds.

We follow the Green Path along the Meuse until Revin. From there through the town in the traffic and even after it somewhat exposed to it on a main road out of the valley. The last part on a lovely smalle tarmac road through the Val de Misère (Valley of Misery!) up to Rocroi. From there on minor and medium range roads across the Belgian border without much traffic. In the very end the road is invaded by huge agricultural machines, but we escape a collision.

We hurry from our coffee break on the market square of Rocroi to Espace Chimay, which is the museum and restaurant of the trappist brewery of that name. For the same reason we have a peek at the monastery, where the munks brew their beer and make their cheese only afterwards. And thus make a little late arrival at the camp site of Chimay town, for which we are heavily scolded by the camping landlady. That's life! 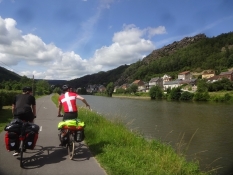 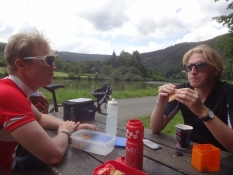 Today was our last day in France, but the Belgian border we crossed only late in the afternoon. Before that we rode an especially beautiful trip up through the French Ardenne hills, into which the Meuse has dug a deep and narrow trench. And the fine tarmac covered and wide trail followed it quite closely, which meant a lot of long detours, as the river winds wildly in many bends. But that's no problem, when you've got time and love biking.

Our breakfast had been quite simple and without coffee, so we found a cafe on the riverbank and had coffee and ice cream. These things really go well together. Our lunch break was easily the most beautiful one, deep into the woods on the trail- and riverside and with a fine view up north into the Belgian wood covered Ardennes. At Révin we left the Meuse and challenged ourselves with the climb up to the fortress town of Rocroi. It wasn't any goal in itself, as we were heading for the trappist abbey, where the Chimay beer is brewed and its fine exhibition centre and inn. It was a picturesque but tiresome slug out of the river valley. A part of it went through something called the Vallée de Misère. The Valley of Misery. That must be a name of the past, as it was a nice valley with nice looking houses. Rocroi is a perfect fortification from the 17th century, eercted by the great master of building fortresses Vauban. Here we cooked coffee on the town square. Afterwards we speeded up our bikes, as we did not want to miss Chimay. In the end we easily made it. We had now entered Belgium, but the language was still French. At the exhibition centre we slowed totally down and plunged into both the museum and the inn. Here we had trappist beer and my sons also cheese in improbable amounts. The cheese was also produced by Chimay. In the very end we peeked into the abbey itself in order to receive the blessings of the Lord. We really needed them after our arrival to the municipal campsite of Chimay about a quarter of an hour after its closing time at 7 pm. That's because we were heavily scolded for trying to list in after an unsuccessful attempt to get into contact with the proprietor on the available phone number. Luckily, Alexander's diplomatic skills and not the least his passport we sufficient to let us in.

We enjoyed our dinner at an outdoor restaurant on a large square in the middle of the town. After that I still had not had enough beer, so I took a trip into the town centre on my own. 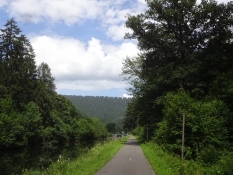 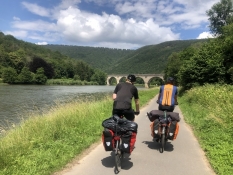 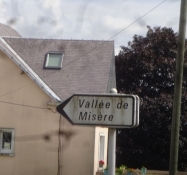 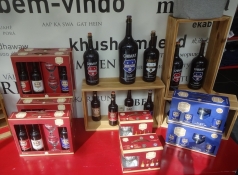 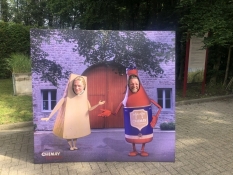 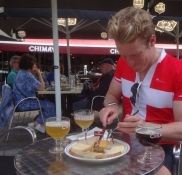 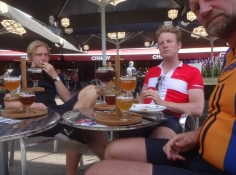 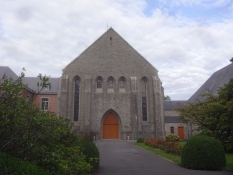 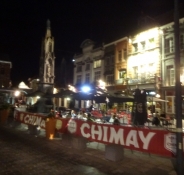