Rain all day long, at times quite heavy, så we got very wet! Modest temperatures for the time of year of about 17 to 18°C. But only light winds, and these even mostly tailwind.

First a steep climb up worn-down city roads in Liège suburbs. Then a superb disused railway track, perfectly signposted (for the last 25 km directly to Aachen), which we followed for about 45 km until just before Vaalserberg. Up to this a normal road led, but with very little traffic. Across the border into Germany on a bike path, then residential streets, a trail through a park and city roads in Aachen, mostly with bike lanes.

The huge amounts of rain, we experienced today, were the reason for heavy floodings in Western parts of Germany and eastern parts of Belgium, including places, where we had been. E.g. the lower situated parts of Liège, including the Outremeuse neighbourhood, where the youth hostel, we had stayed at, were evacuated. Only two days after our visit!

And our train trip home the day after the last stage would not have been possible just one day later due to floodings in e.g. Wuppertal and Duesseldorf! Not to mention that the trail along the Meuse would have been flooded. So we were very lucky. Oppostie to many inhabitants in the narrow valleys along rivers like Ahr and Ourthe, who had their houses flooded and cars and much other property washed away by the wild floods, in worst case even houses were carried away! The disaster cost nearly 180 people's lives in Germany, Belgium and to a lesser degree the Netherlands! It felt very strange to have been that close! 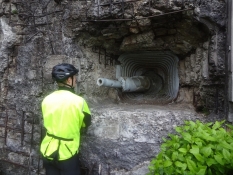 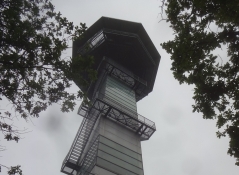 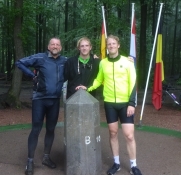 On today's programme was the last stage of our cycling holiday to Aachen. Again a fine disused railway path in the ravel system would take us there. But first we had to climb up to it by way of an extremely steep road, nobody of us could cycle up, not to mention with our luggage. The first bad news of the day was the weather. It poured down all day. Another was that they did'nt accept our credit cards in the supermarket, where we had shopped for lunch, so Simon had to find a cash dispenser in the vicinity. On the other hand we were lucky to find a covered bench-and-table set right next to the bike path. At one place we left the route I had planned, and the terrain immediately turned very hilly again. The peak was reached at Vaalserberg, 345 metres above sea level. The hill lies exactly, where three countrie's borders meet, namely Belgium, the Netherlands and Germany. It's Holland's highest point and one of the southernmost, and of course we had a picture taken of us on the point in a way that made ud stand together in three different countries. We also had a dark three-country beer in the cafe next to the view tower, which we did not climb due to lack of view. Instead we went downhill into Germany into the old Emperor's seat of Aachen. Here I had booked a room at a hostel near the railway station, so we would have a short journey the next morning. Of course we visited the cathedral, which central part, an octogon (structure with eight sides) was built all the way back to the times of Charlemagne, and he was, after all, crowned Emperor  of the Holy Roman Empire already in AD 800. The reliquary containing his bones stands on the altarpiece, and we saw that, but his throne on the second floor of the cathedral was only shown during guided tours, and we didn't make that. Instead, we entered the Charlemagne visitor centre. Simon and I were very interested, while Alexander left us at a certain point. The imperial palace had been, what is now a part of the old city hall, I learned. A curiosity was a photo of an American G.I., who had put Charlemagne's crown on his head after he had participated in conquering the city in a huge battle in the spring of 1945. What a shameless thing to do! Luckily, the crown did not diseappear, but can be seen in the cathedral's treasury. We skipped that, as it had become late. Outside rain still kept on washing down, and in my hostel bed I heard meteorologists predict that all this rain could lead to massive flooding. In this they were absolutely right.

The next day we took the train home via changes in Cologne and Hamburg. One day later this would have been impossible due to exactly flooding, which among many other things disrupted the railway track to the east. In fact, it turned out a catastrophe, causing more than 100 death casualties and enormous devastation just south of Aachen. Even its suburb of Stolberg was hit. Especially the narrow and small river valleys were flooded with the river Ahr worst of all. But also the Meuse/Maas and its triubtaries swelled so viciously that also here there were death casualties, devastation and evactuations. Also the Outremeuse island in Liège was evacuated. Really a nasty ending of our happy cycling holiday! 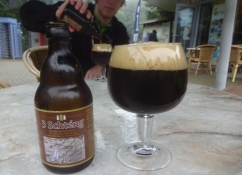 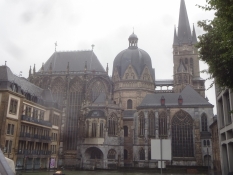 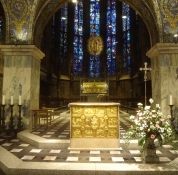 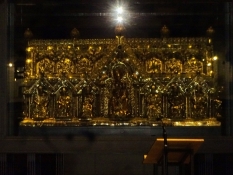 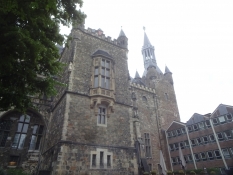 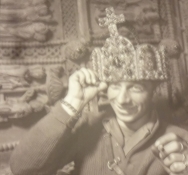