Perfect weather for a bike trip: Sunny and shattered clouds, temperature of 20-22 degrees and light to moderate northerly and northwesterly winds, meaning side- and tailwind.

I followed the regional cycle route (Southern Jutland) no. 64 from Kolding to Jels, then a short strip  on the national route no 3 ("Hærvejen" and then the regional route no. 9 from the start to my goal in Tønder.

The stage was completed as planned. There was a delay in the beginning. First I got on the train an hour later than planned, then the train stood still in Odense due to a trade union conflict earlier in the day, and there was also construction works on the Little Belt Bridge going on. So it was almost 1 pm, before I arrived in Kolding. 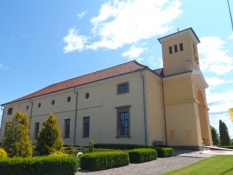 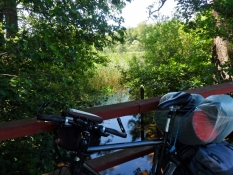 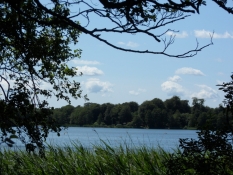 The plan was to take the train to Kolding a little to ten and be there about an hour later. But it was nearly two hours later, I arrived in Kolding. First, I got only on a train an hour later, as I was too slow to pack and get ready for the ride at home. Then they missed a driver for the train, as they had held a trade union meeting that morning, and 'our driver' had not yet arrived, so the train stayed at the station in Odense. As if we were on a rural halt in the 50s (I imagine) said the train attendant amused that you could just go out and enjoy the summer sun, he would certainly whistle really loud when the train was ready to go! Funny. And many people in the big space compartment seemed annoyed and found their mobile phone in order to announce the delay. I had the day to myself, so it was all right for me. Not least because the weather was really unlikely nice and was as made for a long bike ride. I started so by cycling out of Kolding and up to Dalby church along a fairly steep hill. It maade me grow hungry so I ate my lunch on a bench in the cemetery. Soon I was in Vonsild and the trip's first sight, that was Frederik's Church. It was designed by our renowned classicist architect C.F. Hansen, known from Copenhagen's cathedral, the church in Husum and some villas on the Elbchaussee in Hamburg. After a little shopping in SuperBrugsen I went under the motorway towards Vamddrup. A small error made me miss Fovslet forest with many ancient relics, but instead threw me on the Kolding-Tønder road, which fortunately had a bike path here. The trip to Vamdrup was really beautiful and cozy, the town itself seemed functioning with active shops and institutions. Also the route out of town was fine, namely, on the old road, now wide and completely empty of cars. After another crossing of the new road began my 'back door' ride into Jels, on dirt roads through forests and along lakes past the manor Store Barsbøl. I felt like a bath in one of the lakes. At the upper lake's bathingplace a mother and her teenage daughter were bathing, so I let them be for themselves and cycled further into Jels to look for the lakeside resort on the lower lake. First I looked briefly at the Orion Planetarium and the Vikings game area. First, I wanted to make coffee there, but it was too windy for my gas cooker, so I waited till the bath. Here I had to hide behind a windbreak hedge. Here lay now two bikini-clad schoolgirls, but I thought there was enough room for me too. So I just did not look at them. And the coffee with coconut cakes tasted lovely. Quite brilliantly I had remembered to take matches with me this time. (Read "Spring tour to Jutland"!) Afterwards I bathed in the lake, which was even better. I swam far out. On the other side of the lake they played golf. So all in all Jels seemed a great little town to live in. 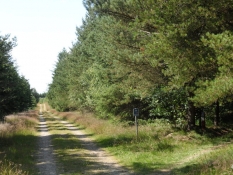 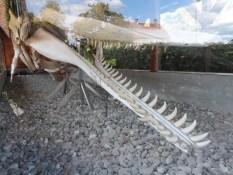 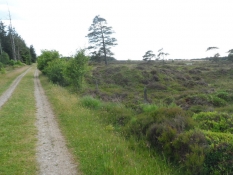 After the refreshing bath I cycled through Jels and out to Stursbøl plantation. I looked forward to a look at it, because in the summer of 2000, I almost became depressed out there, when I saw all the trees toppled and lying pell-mell. It looked simply like a war zone then. The cause was naturally (!) the fierce December storm in 1999. Now there stood young trees all over, which formed an impenetrable thicket, it seemed to me. Well, I slid out into the countryside again and onto an irksome dirt road. Now I went all the time slightly upwards, but then came the reward with an utterly spectacular view across half (that was how it felt) of Southern Jutland. Afterwards I went full gallop through a beautiful forest down to Gram, where the castle greeted med. Very idyllic with ducks in the lake. A big display with a whale skeleton aroused my interest. The whale, which had stranded in Jutland in 1984, was an eye-catcher for Gram clay pit, 2 km to the north, where the Archaean Gram sea is presented with various pasttime relics, and where you are able to dig for Archean relics. The teeth of the whale skeleton was a copy, otherwise it was real. Now it went uphill again out of Gram to Tiset an Arnum. Here I filled my bottle up at the local store, since I had not found any church in any of the towns and villages. Even twice, which surprised the merchant. But it WAS really hot. He remarked it was good, it was not beer I drank so fast. Haha. But I had a 'beerless' day today as it was Wednesday. Just after Arnum, at the intersection of Hellevad-Bov high-way in a roundabout, I had a frightening experience with a truck. The driver drove much too fast towards me, even though he had to yield entering the roundabout. Consequently, I gave him the finger. For a moment I thought the truck would run after me down a small side road, for he honked profusely. But the bastard drove on towards Flensburg. Although one is big, one must comply with the rules and not scare the 'small ones.' But had he not done so eventually, all I had been was a stain on the asphalt. Still scared inside, the landscape flattened out and grew more beautiful. The route, now Route 9 from Jels to Tonder, led into Linnet forest. I was all alone in the woods, and a sunlit heath stretch invited to a rest. I was close to falling asleep against a pole, but I had the advance to Tønder before it turned too late and perhaps dark. 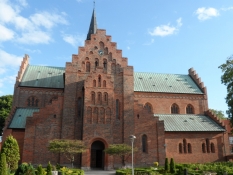 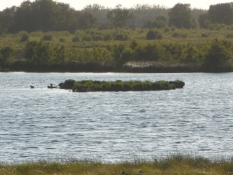 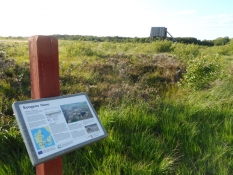 There was still over 30 km to Tønder, and the wind picked up a little. Furthermore, I had spent quite a lot of time in the woods with the rest and a sandy 'pulling stretch' (Germanism. From 'Schiebestrecke'. The Germans push their bike while we pull it, when not riding it. Funny!) And then I bonked, some 6-7 km before Loegumkloster. There was nothing else to do than pull over along the roadside and eat some sugary items, in this case chocolate and bananas. Afterwards it went fine the last piece into the monastery town, also by a quite inventive, but difficult, sparsely signposted route through housing estates, around playgrounds and under roads. Inside the town I looked for the magnificent abbey church, which of course was closed at that late hour. But on this evening the light of the low sun shone so beautifully on its outside, and I've been inside it several times. It is one of Denmark's bestl-preserved medieval abbey churches, and the crypt is probably one of the most beautiful rooms from the Middle Ages at all. Unfortunately, quite heavily restored in the 1800s, as was the habit then. I had also a look at the carillon. A board announced concerts this summer and playing the chimes is taught as a subject at the convent school of music. After the town followed a very nice gravel road stretching out to something called the King's bog. My pace went down, but now it was not far to Tonder anymore. But still, I drove behind a car for several kilometers, while I considered to overtake it, but gave it up, and that was good, because we soon came to a place with a bird tower and an information board that told of a national project to preserve Danish bogs. Besides the car that obviously held a local resident and his guests whom he wanted to show the bog, there were also a couple of German motorcyclists who had found the way out here. And the atmosphere was indeed lovely and very quiet in the evening sun. Many birds were now not to be seen from the the birdwatch tower.

Now the wind had also died down and the last stretch towards Tønder was completely flat and therefore easy. The route was perfectly signposted into town and followed a good path along a disused railway near the river of Vidåen. It ended right where the campsite stood near the highway to Sonderborg. The campsite shared their reception with the hostel of Tønder. As the staff had gone home, I called a number on a phone and was told that I should just put up a tent and settle things in the morning. Fine, that was the message I wanted to hear, so I quickly pitched my tent and picked up some food at the last minute before the shop Fakta closed at 9. But I still lacked a bath before I finally could start to cook in the excellent camp kitchen. But I was so hungry and impatient that I turned the burner to hot and burnt my chicken breast pieces along with my noodles. Well, it tasted absolutely excellent anyway after I had cut off the worst pieces of coal. Afterwards I went straight back to the tent and crept down into my sleeping bag. I was kinda used, I could feel, but now it was also completely dark.