Still summerly weather with sun, but a trifle cooler than the other days, but then it was a morning trip.

Planned short stages from the last accomodation point at the tentsite in Sofiedal to the station in Tinglev in order to catch a train back home in time to begin work at 1 pm. 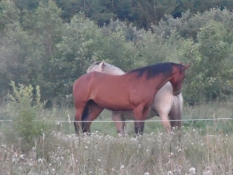 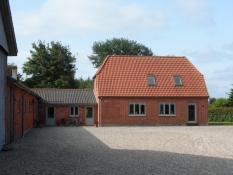 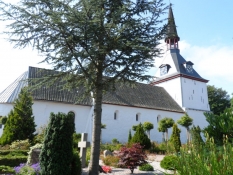 The morning in Sofiedal was strikingly beautiful as the sun shone and dried the dew away, which lay everywhere. I was fairly early up in order not to have to hurry up on the 11 kms into Tinglev where my train left a little before half-eleven, so I had time to be on my night shift at work at 1 pm on TV2. But there was plenty of time to enjoy the perfect morning with a good breakfast and even another stroll down to the horses.

But then I packed up and swung me into the saddle in order to cycle the few kilometers to Tinglev. The wind had died down and the weather was absolutely perfect, and I enjoyed the easy small stage. In Tinglev I took a picture of the church before I rolled down to the station. There I had a negative experience of having to lug my rather heavy touring bike up and down the stairs. Not as much as push ramps (what we at least have in Odense) had been installed, not to mention elevators here in this somewhat degenerated Southern Jutland railway junction. Two hours later, I arrived in time in Odense and cycled to my workplace at TV 2. During my shift I could feel the bad night's sleep and it was altogether a very harsh change from the bike trip, but that's what happens, when you try to get the most out of a bike ride. But the memories feel absolutely fantastic. The almost seamless trip was really enjoyed by me to the full.