Quiet and sunny Indian summer just on the brink of autumn. Temperatures of about 17 to 18°C. At night a minimum of 11°C, so quite suitable for a night in a shelter.

During August, I got the idea to cycle to Aarhus to visit my two sons Alexander and Simon and the latter's girlfriend Signe a weekend in September and preferably not after the equinox, as it takes me about 12 hours to cycle the approx. 155 km up there. And since I do not want to cycle in the dark, the date must therefore be before the equinox, i.e. 22nd, September. Because the weather forecast promised an unusually fine Indian summer with sun and almost no wind, and I had time off for it, I expanded my plans with an overnight stay at the naturist campsite in Kysing near Odder. Then the first, long stage also was a bit shorter. And the 146 km the route I had planned on All Trails.com summoned up to, is certainly a taxing distance to me. Consequently, I had to get up at 6 to be able to cycle away at sunrise at 7. Well, I left at almost half past seven, and as soon as I trod the pedals, my front brake annoyed me. The hydraulic disc brake made a bad noise, and twice I had my luggage off and the bike turned upside down for adjustment before I was satisfied. But in the hills west of Fredericia I still decided to see a bicycle repair shop, because with hard braking it made a completely unbearable noise, even though the braking effect did not fail. Before that I enjoyed the trip across West Funen to the fullest in the quiet, cold sunny morning. The trees hung full of  dewy cobwebs through which the sun shone, and the large forests around Langesoe have rarely seemed more like real nature, even though much of the forest consists of biologically poor Christmas tree plantations. Like conventionally cultivated barley fields, just with thicker stems, but just as heavily fertilized and sprayed. In any case, I was glad I did not tread along on the Odense-Middelfart country road, where there indeed is a good bike lane, but where the morning traffic is still tiring. So via Vaede and Padesoe I mostly cycled on the Danish national cycle route 6 (Esbjerg-Copenhagen) to Fjelsted, where I took a short drinking break at the church. I found that I had caught up with the delay from my late departure plus the braking hassle and was now easily within the average of 12 km / h I had set as the overall average speed with breaks. A little longer break I held at the Q8 tank in Nr. Aaby, having, after all, turned onto the main road shortly after Fjelsted. There I enjoyed a roll and a choco-croissant washed down with a bucket of coffee before rolling on. Not without having to look after my bike again, which is fairly new (I bought it in Hamburg in June this year). This time my front fender had come loose and scraped against the tire. Once you have bought a new bike, the screws must be retightened after a while of use. I knew that very well, but I found out now, and that fact was confirmed later. It is not good having a screw loose, and not at all when cycling. 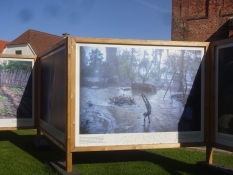 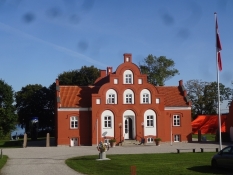 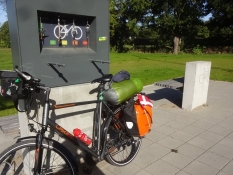 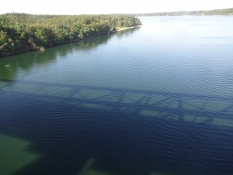 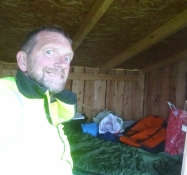 I fixed the front fender screw temporarily, as I did not have the right tool, and cycled the last 12 km into Middelfart. The name of this town sounds very funny in English, maybe even a little embarrassing, depending on who you are. The town's name means 'the middle ferry crossing', namely over the narrow stretch of the Little Belt to Snoghøj on the Jutland side. Today, there are two bridges across the belt, opened in resp. 1935 and 1970, but since the town has a medieval church, it is considerably older. And the ferry service has given it its name. I enjoyed a short rest at the brick church. The sun was shining brightly, and gradually it also warmed me on one of these last days of summer. For me, summer goes from solstice to equinox, just as winter only begins at solstice, a few days before Christmas. These are the astronomical seasons, and they are somewhat better suited to the weather and climate, regardless of the former's fluctuations and the latter's lasting change. In this way, for two-thirds, the month of March becomes what it truly is, a winter month. Well, now it was summer and in front of the church they had put up large photographs to form an exhibition about the impact of climate change on a small community in the African country of Malawi. I was a bit shocked by images of ravaged landscapes where there had been an unusually long drought followed by absolutely violent rainstorms that created floods and a terrible erosion of the earth. The text described how a particular family tried to cope under these harsh conditions. The last poster was plain text. Based on the catastrophes in Malawi, the question was: Does climate change affect us? With my mouth open, I read the answer: One of the main reasons for the war in Syria is that many people fled from the countryside which had become difficult or impossible to cultivate due to climate change, into already crowded cities where Syria's labile clan structures collapsed and triggered the war, which in turn triggered the influx of refugees, which is a major problem for us in rich Europe as well. This was real news for me. I thought Syrian President Bashar al-Assad was to blame for the war plus a lot of religious and political complications. But the climate? I learned a lesson there.

With those thoughts in mind, I cycled up the hill towards the old Little Belt Bridge past the beautiful red manor house Grimmerhus and into the forest. Shortly before the Little Belt Bridge, I saw a bicycle emergency repair station, which had the most common tools attached to wires that could be pulled out. Now I had the front fender screwed on properly with a wrench. The forest on the Hindsgavl Peninsula looked beautiful as it had just begun to fade. It was still mostly green, as it was still summer, wasn't it? Funen is fine, as they say. Or Funen was fine for me this time, because now Jutland was rolled out in front of my front wheel. I left the main road in order to follow the bike route around Fredericia. It's adventourous and winding through a lot of booms, up and down over kerbs and on a potholed gravel road deep down and steep up again afterwards. You don't want this route, when you're busy. Then the numerous slowdowns will annoy you. In addition, my front brake sounded completely wrong again, and I decided to have it fixed in Vejle. But I had i done already in Boerkop, because on Google Maps I could see that there was a bicycle repair shop very close to my route. And the mechanic really just had to tighten a loose screw. Right after, however, I had to tread in stead of use my brakes, because the Andkaer hill is long and only flattens out at 88 m.

Down in Vejle it was time to empty my lunch box to refuel my bread engine. I consumed five slices of bread. The sixth with liver pate was scorned. In a Danish setting Vejle's surroundings are extremely hilly, so I neede some fuel. During half a kilometer the terrain rose by more than 60 meters, and here it flattened out only just over 100 m. I cycled past Vejle stadium, across the highway and down into a river valley and up again to the school Haeldagerskolen, where the children just were off for the weekend on this Friday at two o'clock. They did not pay attention to me at all, so I had to be careful not to run into any of them. Children may seem enormously careless to us adults, but they just enjoyed their freedom. Like I did in my own way.

Between Vejle and Horsens I followed the straight country road. Boring, but it's the fastest way forward, and it had an excellent bike path, which is only interrupted in the center of Hedensted, approx. midway between the two cities. Hedensted is an inner-mission Christian stronghold here in East Jutland, where the movement otherwise has most followers in West Jutland. Horsens I just blazed through at full speed down the hill into the center and then without looking left or right out of it. That's because I had an important goal right now: Coffee break at Husodde beach, about 5 km from the center. My schedule allowed me 40 minutes of rest here. Fine. Then I would not have a swim, but just slurp the brown drink in me from my thermos along with cookies and a banana. 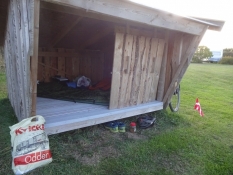 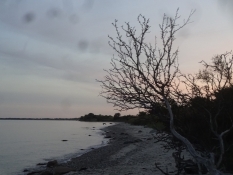 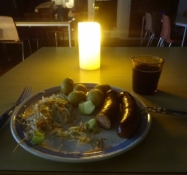 After my coffee break, I had to negotiate an ascent again, because that is how all the East Jutland fjords are, as they are flooded tunnel valleys which the ice dug during the ice age, or rather the meltwater from it. Horsens fjord is less steep than Vejle fjord and the climb from Haldrup up to the mast near Aaes, past the manor Tyrrestrup, is more long than steep. However, gradually, I felt the many kilometers in my legs. Fatigue knocked on my door. What I always do in that situation is set myself intermediate goals. Then the distance becomes more manageable. And such a goal was now the town of Odder, where I wanted to shop for dinner and breakfast tomorrow, as I assumed that NFJ Camping would not be able to deliver what was needed. In addition, it now mostly went downhill, and after Odder and my shopping in Kvickly, which I celebrated with a cold beer in the parking lot, the hilly terrain ended.

My watch was approaching seven o'clock and thus sunset, when I turned onto the gravel road down to the naturist campsite, where I occupied the shelter as my night accommodation. I had booked it in advance, and it is located at the very end of the site and nicely secluded, so I could afford to play you tube music on my mobile before bedtime.

Before that, however, two things needed to be done. First a fresh sea bath from the nude beach below the stairs and then of course dinner. I prepared it in the well-equipped kitchen, where all the necessary utensils were to be found. I made pan sausages with small potatoes and coleslaw, which I had in the living room along with some good beer. First a Schneider Weisse Aventinus, which is a very delicate double wheat bock from Munich and then a Didrik strong pale ale from "De 5 Gaarde". Meanwhile, darkness fell on the outside. When I got up from the table, I felt I weighed 200 kg, so I only made it to the couch, where I turned on the television set from the remote control. And the dishes later felt heavy too, but in the shelter afterwards I enjoyed myself as I said with my cellphone and a Willemoes Belgian Ale until late at night.