In the morning foggy and overcast, but from about 2 pm it was sunny. Completely quiet.

The plan today was to relax in the morning and then at noon cycle into Aarhus, where the fun was to take place. So I allowed myself to sleep long in my shelter. I could well keep warm in my Estonian super body condom. Super body...:-D

The first "program item" was a skinny dip. It was foggy and a bit chilly, so I only took off all my clothes on the bench down on the beach, approx. three steps from the water's edge. A small stinging jellyfish floated in it, so I had to keep my eyes open. Well, I had brought my goggles. So I swam all the way to the bathing jetty and strolled back in my birthday suit. So much for naturism this time. I only met a dressed woman walking her dog on my way back to my clothes, but that's how it can be when summer is over. Naturism requires of course some higher temperatures, as human beings do not wear clothes only for the sake of modesty. In warm weather, however, it's quite normal to walk about in the nude on this campsite. I like the free athmosphere, where the body's frailties are totally exposed and everybody is happy with it and this attitude creates really good company.

After the bath, it was time for breakfast in the small camping kitchen. The milk had been chilled in the fridge, I had brought muesli from home, and had bought bread in Odder. So everything was fine. When the dishes were done, I settled the bill with Jan and Sus, as the host couple is called, and went down to pack my things in the shelter. And then I sat down in the living room with my book. It was completely quiet, I was completely alone and I enjoyed it. The fog eased a little, but it was still cloudy. And completely windless. It had not blown for over a week now, and this is very rare in Denmark. Before I cycled off, I went for a little walk along the beach up to Kysing headland, where there are many cottages and back on a path on the cliff edge. Now a few more people had come out into nature, and on the bike ride I saw a lot of people who enjoyed their Saturday outdoors.

But it is indeed a beautiful area, I cycled through in the large forests around the ancient times' center of Moesgaard and further up through the hilly forest up towards Aarhus. One place on the very cliff edge, a man had lit a large bonfire. There I rested a little, drank some water, and threw off some of my clothes. I was not wearing cycling clothes, because it was not far. But the many climbs made me sweat all over, like I usually do, and at Ballehage I stripped everythingl to jump into the water. Really many people enjoyed nature here, but now I was also close to Denmark's second largest city on a Saturday in fine weather. There are lots of trails in the coastal forest for both pedestrians, cyclists, mountain bikers and riders. And this free offer is well accepted by the people of Aarhus. They are not that stupid!

As soon as I was in the center, I had lunch at a burger bar in Skolegade, which called itself Uncle Madglad ("fond of food"). The owner demanded that I put on a face mask, because they had become commonplace as a countermeasure against the rising COVID-19 infection rates. No problem for me, because I was prepared and had one in my pocket. As I sat outside wolfing down a big burger, the sun came out and warmed truly wonderfully. Before it had been a bit clammy and cool. A taxi driver got out of his Mercedes and said good morning to me and a group of winos sitting outside the pub next door. It was half past two in the afternoon, but he had probably been driving all night and had just got up. I also managed to contact my son Alexander on the phone and received a gift wish from him. It was his birthday in a couple of days and one of the reasons to visit him was to hand over a gift to him on that occasion. And it was a gift card for his favorite outdoor store Spejder Sport, which I found via Google Maps. I arrived just in time before they closed at 3.

Now the idea was to cycle up to my other son Simon and his girlfriend Signe up in Skejby. I chose the cycle route 815, the Vejlby-Lystrup route, including the obligatory hill, past Risvangen stadium, where the football club Aarhus Fremad is located, and a lot of allotment gardens, where life was also enjoyed. We Danes are good at enjoying our seasons to the full, and when autumn threatens ahead with rain and wind, one just has to get outside in the last sunrays of summer. 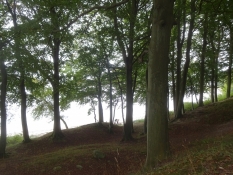 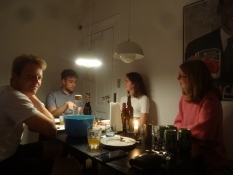 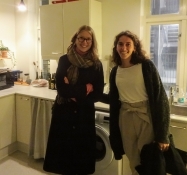 In Skejbo College I was lovingly received by Simon and Signe. She had baked buns and made a delicious apple and blackberry cake with fruit from their own garden. We had a good chat, but as the afternoon went on, the TV set, running in the background with the decisive time trial of the Tour de France got more and more attention. Until Simon and I surrendered and moved to the couch. And it was a thrilling experience, as the whole race was settled with a phenomenal time trial by the Slovenian Tadej Pogačar. He picked up a full 57 sec. on his compatriot Primož Roglič, who rode in yellow, and it was fun to see how the faces of his teammates Tom Dumoulin and Wout van Aert, who at that time were No. 1 and 2 in the time trial, grew longer and longer as they realised that they not only lost the stage victory, but the whole Tour to this young phenomenon of only 21 years. On TV 2, they said that not since 1904 (116 years!) had the Tour de France been won by such a youngster.

Shortly after the end of the stage, Simon, Signe and I cycled towards the city centre to visit Alexander. It's almost one long downhill ride. Only near the art museum of Aros it goes up a bit, and I could feel my thighs not really were in for it anymore. Just before Alexander's home in Odensegade, we bought some good and cheap beer in a Føtex and were well received with fried salmon in the oven and pasta. Signe is so-called pescitar ("fish eater"), so it was absolutely perfect. He had seasoned the fish well with pepper and chili. In addition, we slurped the beer we had bought plus Alexander's reserves. For dessert, my niece Josefine and her boyfriend, also named Simon, also showed up. The dessert consisted of Signe's famous apple-blackberry cake. Unfortunately, this Simon had a little hangover after a hectic Friday and ate and drank nothing but water. But he was nice to talk to, and the rest of us had not seen him before.

It was past midnight before we walked the short distance to Josefine and Simon's apartment to see how they lived. Actually, they live above the pub Peter Gift, and it had been our plan to drink beer there, but just the day before, the Danish government, as a corona infection restriction, had issued an order that bars and restaurants had to close no later than at ten. So, of course, we did not make that. But we managed to see the young people's paradise before we said goodbye to my son Simon and Signe, who had to cycle back up the hill to Skejby. Alexander and I immediately turned in when we were back in Odensegade, I on the floor on my mat in my sleeping bag. And it's been a long time since I've slept so well.