Quite a sunny day with some cloudy periods. Chilly, but somewhat warmer, 12 to 13°. Moderate winds from the West, so I had a headwind in the beginning and the end, and cross winds in the middle.

After the cold night I stirred to life quite early. I had a long stage with several highlights in front of me, so it was about “seizing the day” before it got too old. First "excursion" went up the lookout tower. Again. The morning light was soft and the air was crystalclear. Behind Stevns cliff and the wide Fakse bay, another cliff towered up, and that was of course Moen's cliff. Here it consists of pure, white writing chalk, and it is somewhat higher than Stevns. Therefore, that cliff is more known and loved among tourists. But geologically, Stevns cliff is more interesting. Imagine, I was in the place where the reason for the extinction of the dinosaurs is proven. Most clearly in the whole world. Not bad. I thought about that when I cycled past the huge chalk quarry, where the company Omya A / S, which is owned by the local Gjorslev estate, produces chalk commercially. But it does not destroy the cliff, or only maybe 100 meters of it. The first goal of the day was Hoejerup old church. It is "world famous in Denmark" because its choir slid down the cliff in 1928. It was not a dramatic event, because the church had been closed in advance and all the furniture moved to a new church that had been built a little further inside the village Hoejerup. Today there is a viewing platform with railings where the choir once stood. And it is secured against further landslides with a high concrete wall and a lot of large stones in the seabed under the church. There is a nice staircase so you can see it all from below. On a ledge in the middle, a herd of white, long-haired goats "nursed" the vegetation.

As I was about to reach the cliff top again, a fresh wind blew into my face. It worried me a little, because I had to tread against it now almost all the way to Praestoe and then again in the evening until shortly before Vordingborg. And now time had been allowed to slip away. So I wasn't happy about an extra detour in Roedvig town, as I had made a drawing mistake, when I had planned the bike route. It led me out on a sandy beach. It's obviously a no-go with all my goods and chattels, so I had to prolong the route. Soon after, my bread engine also required fuel, so I opened my lunch box on the side of the road and shoved the calories inside. Now Fakse Ladeplads was the target, but it was four o'clock before I left it again. Before I had cycled through a very beautiful stretch of forest along the bay, where the beeches, very Oehlenschlaeger-like, mirrored their top in the wave of blue. A mini-shopping and a coffee break at the church also happened before I looked forward to enjoy  some crosswinds instead of headwinds as the route swung south. There was still 40 km to Vintersboelle. 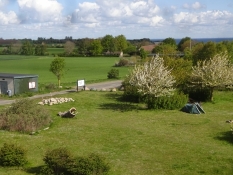 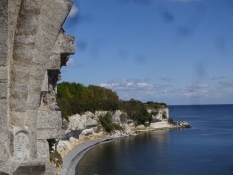 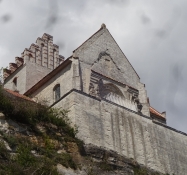 The churchʹs choir fell down the cliff in 1928 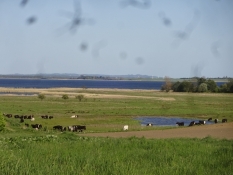 A very common view on today stage: Lush meadows with cows, a sound and an island behind 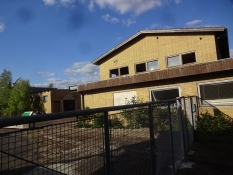 After Fakse Ladeplads, the headwind continued a little longer until I could sense the town of Praestoe on the opposite side of the fjord. At that time I had passed the peninsula Feddet, which separates the fjord from Fakse bay. Praestoe is one of the most news-poor Danish places. I only remember once that it was in the News, which, after all, is my workplace, so I should know. That was when a leader at the nearby Lundby bording school some ten years ago chose to let students do a dragon boat cruise on the fjord. In February in windy weather! It ended disastrously, many boats capsized and several young people ended up disabled due to brain damage after the stay in the icy water. Praestoe had been the place where the lifeless bodies were brought ashore. I thought about that when I had found myself a bench near the marina in the sun sheltered from the cold westerly wind. The riggings of the sailboats were howling. And I was getting tired in my not-so-young-any-longer body. But not tired of cycling, and there was still a nice distance in front of me. So I manned myself up, rounded a park and the big church with three transepts, which makes it look like three churches next to each other with a tower at the end. But I did not go inside. Now the most scenically beautiful piece followed down towards Kalvehave. But quite hilly. An uphill with headwind challenged me. And I could have omitted it! But the path to the south looked so miserable that I skipped it. I probably wanted training. I also skipped Jungshoved, the peninsula southeast of Praestoe. It is known from Danish Television's film series about the Chief of the Goenge gang Svend Poulsen, who played on the estate of the same name. I remember Soeren Pilmark in the main role. When the road is long and I grow a little tired, it always helps to set sub-goals instead of the distant end goal. I had done that all day by the way, but now my goal was Viemose and the ruins of Prom's chemical factory. For me, the name of that village is firmly connected to this scandalous business from the 70s and 80s, which became known for a number of bad pollution cases with illegal discharge of highly toxic wastewater into the sound Boegestroemmen below the factory. The sibling couple Margrete and Svend Auken fought as politicians against the brothers Prom a fight for our common environment and eventually walked away with the victory. The factory was closed and never re-emerged. So the brother lost, but nature also lost, and the case became an example of what you as a Danish business leader can allow yourself, or think you can allow yourself, to do to the environment. Today, the factory buildings stand as a ruin behind a locked gate. A woman walked up to it from inside and asked about my errand there. She was kind enough and we had a chat about the Prom brothers and their leftovers. She did not defend them, but still showed understanding for their actions. It's probably also the best to do when you live so close to the matter, because she really lived inside the dilapidated, overgrown factory area. Finally, I asked about a grocery store that was still open, and she said that one at Kalvehave had open until 8. It was a little past seven, so it sounded fine. But a huge downhill later, I stood before a closed shop door. Another woman in Langebaek, about ten km later, also thought that the shop  closed only at eight, and then the one from Viemose was instantly forgiven. They had obviously changed the opening hours recently. The wind was still blowing moderately into my face, and there were still many hills, so I chose to stay on the main road between Stege on the isle of Moen and Vordingborg, even though it did not have a bike lane on the first stretch. But there was an open Netto in Stensved to head for, and thus it became my last intermediate goal of the day before the final one at Vintersboelle forest, where I arrived a little over nine and felt somewhat worn down. 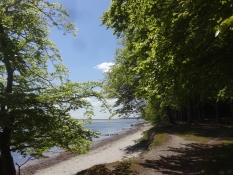 Forest right down to the beach shortly before Fakse Ladeplads 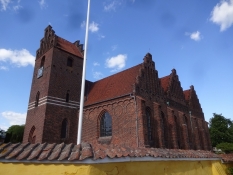 The church of Praestoe has no less than three transepts 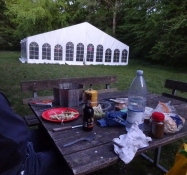 Vordingborg municipality's campsite at the senior center in Nyraad looked inviting with a place for campfire and a privy. It had also a water tap, although at first I did not spot it. But in the middle of the square stood a large party tent with coloured rice paper lamps in it. Everything was empty and abandoned. I knew there was hardly going to be a private party, because they were banned at the time. Her Majesty the Queen herself had said on TV that it was not the done thing to do that. What was it then? Furthermore, the site was divided into two halves by a mine strip across. What the heck? Well, I pitched my tent near the scout hut that stood at one end, and why did I actually do that? I can not remember. But that it was wrong, I did not find out until the next morning. Now I had to get washed in the sea and then cook a dinner, as long as there was still some daylight. The beach could be seen from the senior center where I had been looking for water but could not bring myself to ask inside. You were not to expose the elderly to the potential risk of infection. In return, they could watch a brand-naked cyclist at the beach along with a couple of passing runners. I probably should have put on swimming trunks. But it's faster without, and pace was important. I lowered it only, when I had munched a chicken salad and two pork chops. It tasted heavenly as always. My culinary pursuits are not great, but so is my hunger and appetite in return. And thirst. After a slow round of dishes, I hit the hay. It had been a long and a somewhat hard day. I had not found the tap, so I had to do it in the morning to be able to make coffee.