Chilly to moderate (14°C to 18°C) weather with some sunny spells and a lot of clouds. Moderate to brisk southwesterly breeze, turning west and thus a considerable headwind all day long.

As introduction to the bike weekend served the 50 km stretch from my home in Naesby outside Odense to Boejden ferry port in order to take the ferry "home" to Als and meet my brothers there in Fynshav ferry port, where the common part of the bike weekend commenced. 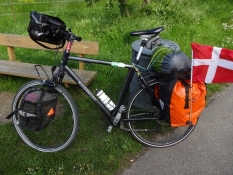 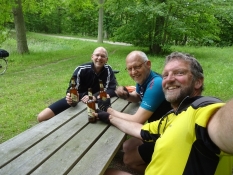 Vi både cykler og drikker øl. Her i Nørreskoven/We both bike and have beer. Here in the Northernwood

The last 12 years my brothers and I (with two exceptions) have had a tradition of meeting once a year in the spring or early summer and cycling a particular place. The task of arranging the weekend and defining the cycle route is changing and this year it lay in the hands of our youngest brother Michael. He had chosen our common homeland island of Als to be the theme. As the only one of us, he still lives on Als with his family, namely in Holm on northern Als. So all three of us were to meet in Fynshav ferry port, to which I arrived by ferry from Funen. As the only one I do not even live in Southern Jutland anymore. The introduction stretch alone across Funen had been a nice one, though I had been a little pressed for time, partly because of an unpleasant southwesterly wind that slowed my progress. But I made the ferry port of Boejden without problems. Our middle brother Bernhard had parked his car somewhere on middle Als and did not meet me at the ferry port like Michael, but half a mile up the hill at an intersection. This way he could spare his legs climbing that hill. Bernhard is clearly the one of us cycling the least. Both Michael and I have biking as a hobby, but I'm probably the most "extreme" of us three. Today's stage would lead us to Michael's home, and the first section went through the Noerreskoven ("northern wood"), a beautiful, narrow deciduous forest out to the Little Belt. There are several ancient monuments in the forest, but we held a beer break at a medieval rampart, which Duke Hans the Younger had built. Like so many other castles it was ravaged in the Civil War of Grevens Fejde ("The battle of the Count") in the 1530s. Gosh, was it lovely to sit in good company on a bench and drink good beer. Later on our way through the forest, Michael and I jumped into the Little Belt wearing our birthday suits. This refreshened us for the final kilometers towards Holm. 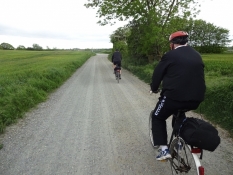 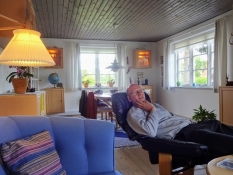 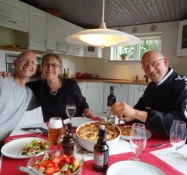 Lis serverer lasagne i køkkenet. Mums/Lis has served lasagne in the kitchen. Yum-yum

Via Himmark beach and Havnbjerg beach we three musketeers now cycled towards Nordborg, the island of Als's second hub after Soenderborg and in many ways its counterpart, as the name also suggests. And as the name also says, the town developed in the shelter of a castle. So here the two Alsian centers have a common feature. However, Nordborg Castle is situated on an artificial island in the lake of the same name and is painted white, where the southern equivalent at the sea looks more like a barracks in red stones. And as such, it also served in German time. This is the evil time from 1864 to 1920 how we Danish-minded people of Southern Jutland see it. Not because we have anything against the Germans. Anything else but. But nevertheless, the German north border is placed fine where it is now. The result of a very democratic decision for that time. And the respective minorities north and south of it have all rights to use their language. The only thing is that the land border is increasingly becoming the language boundary as well in step with the older inhabitants of Schleswig fall away. Or run out how my history teacher in the Armed Forces liked to say. The dialects also have a hard time. My brothers and I are stubbornly talking Southern Jutland dialect. "Synnejysk", please. But none of our children (okay, mine have never lived in Southern Jutland) do so. So that dialect will probably hit the grave along with us sometime. Mojn mojn. (Goodbye in dialect). But we still live and cycle on. The latter, I suddenly felt hard to do, even though the distance was no big deal. However, hypoglycaemia, also called "to bonk", can hit you anywhere. Luckily I had a bag of dates in my handlebar bag, so I survived the last few kilometers out to Holm. Michael lives beautifully at the back of beyond, and it was great to check in with him and fill up the carbohydrate depots with lasagne, which the lady of the house Lis had prepared for us. Flushed down with a couple of Flensburger pilsners in the characteristic plop bottle, it was close to heaven. We just love to drive across the border to buy eg. German beer. In this way it is fine that it's close. But still goes south of Als. Sometimes you can have it all. And we had it! After dinner, Michael played a couple of good discs on his high-end music system, so now also the ears were catered for. Until Bernhard and I went downstairs in order to bunk a couple of hours.