VERY WINDY! Up to a stiff breeze from Nortwest and thus right against me. Cool temperature, 12-13 degrees C, but dry the whole day.

Stage 2 from Arnborg to Lemvig was shortened due to technical problems with the bike (3 broken spokes) in combination with a heavy headwind. Instead I biked to Vemb and took the local train to Lemvig. From there 3 km to Lemvig Beach Camping, where I stayed overnight in my tent. 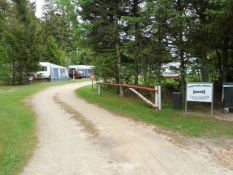 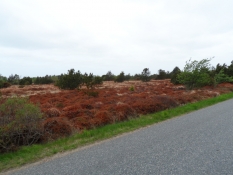 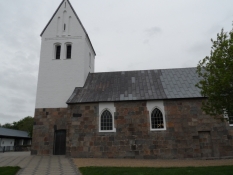 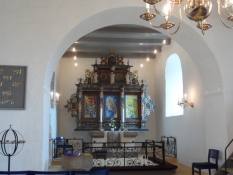 The second stage of the spring tour from Arnborg to Vemb / Lemvig was characterized by the strong winds up to gale from the northwest, which blew straight at me. The day started, however, more peacefully. But I woke up several times in my tent and could hear the rain drumming against the canvas. At 8 o'clock I rose and saw to my great joy, that the sweet camp hosts had put a liter of milk outside my tent. It was very sweetly done, because I had told them that I had forgotten to buy milk for my breakfast the night before at check-in. So now I could eat a large portion of muesli with milk on the bench outside the kitchen and a few slices of rye bread with butter. Thus equipped for today's hardships, I checked out of the camp manager. 40 DKK was what they wanted, and it was cheap. The milk did they not charge me for, nor for freezing my freezer pack. I thanked him and after a photo of the campsite I set out on the road. As I said it blew heavily, but it stayed dry all day on the bike, and I shall be very grateful for two reasons. Firstly, I had left my bike rain jacket in the train and had only my woolen sweater on, secondly, because it was raining heavily in other parts of the country, including home in Odense and even Grenaa got a lot of water that day. There was nothing else to do than to gear down and go slow. The first piece went through many plantations, and there was more shelter. But I was still going only slowly. In Snejbjerg, just west of Herning, I sat in the church to get out of the wind. It was nice and quite quiet in there. I should be glad for several church rests that day. 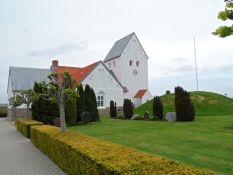 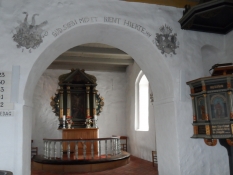 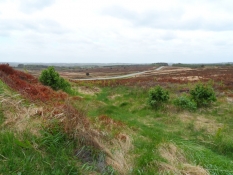 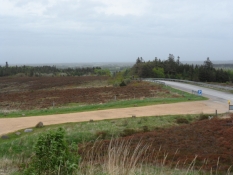 After Snejbjerg route 32, which I still followed, swung to the west, including along a gravel path and a piece of grassy slope through a small grove. It was a nice change of pace, and I cycled so slowly anyway in the headwinds that time did not play a role anymore. I could figure out that if I pushed violently,  my thighs would give up sooner or later, especially after the tough stage the day before, and I commend myself to be good to hold back. Often I cycled only 10-12 km / h on fine tarmac! Then one must set oneself preliminary targets, and such was the church in Timring, located on a hilltop. There would I eat my packed lunch, and great was my joy when I saw that the church, which is classified as a Roadside church, had arranged a small lunch room with views out the window. There was also a toilet. Plus, of course, a peaceful small devotional minute inside the nave. After this lovely little break the wind did not feel as strong, although it actually increased. Soon I undertook the trip up Trehøje, fortunately in a dense forest, otherwise I probably would not have been able to ride up there. Down to the smallest front chainwheel and up on the big rear chainwheels. Thus I managed. The reward, Trehøje, with a large heath for as long as the eye reached. It was gladly accepted. However, only after crouching into the shelter of a toilet building on the parking lot. It felt cold now too, as the sweater did not stop the wind, and I missed especially my wind vest inside the jacket. Afterwards I had to get up on the highest of the three hills. A sign that the road was blocked ahead made me uneasy again with the prospect of a most unwelcome detour, and I tried to spot the obstruction from the mound top, but it was impossible to see something down in the valley. 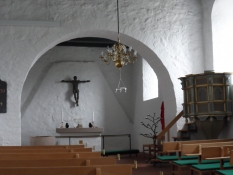 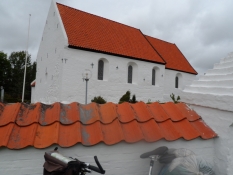 I decided to try my luck, and it turned out to be a good decision, because I was well down the hill and could turn to the north, where I had inteded to. There followed a very open and therefore tremendously difficult piece of cycling. It felt much longer than I could see it was on the map. My preliminary target was now to cross the main road 11, the West Jutland north-south axis for cars. To reach it contained a (felt) long and bumpy dirt road. And here there was a very nasty sound from the rear wheel and I knew that a spoke was broken. That sound I do know well! And soon the broken spoke flapped around the wheel, so I had to screw it out of the nipple. It was not good, because when one spoke breaks the others begin to yield. I decided to have my the coffee break in Wind (!) Church porch and decide what I would do now. And shortly before the church broke spoke number two. At one point it even stuck in the brake disc, and I was afraid that it had bent it, but fortunately the disc functioned normally. This mishap settled the case as I had planned to cycle through Klosterheden, the largest plantation at 15 km straight gravel road. It was impossible now, especially because it was a gravel road. If the rear wheel broke down there, I would have real problems. So I decided to cycle to Vemb on asphalt roads, however, following route 32 as far as possible. There followed a very beautiful piece of road through a heath and a small plantation. Here was also gravel road, but then I pulled the bike for the 3 km, it lasted. 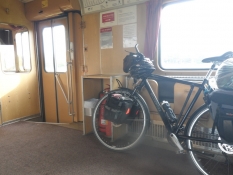 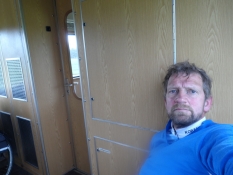 The plan was to take the small private train in Vemb, called the 'pig' to Lemvig, which was my goal anyway. It was half past five when I arrived at the station after another openly piece with totally crazy strong headwind. And then broken spoke number three in very Vemb. It could not shake me anymore and luckily a 'pig' was standing on the tracks and almost waited for me to get in. That was luck! And really nice to relax and be on the track. I was all alone in the bicycle compartment and could follow the tracks backwards. Oddly enough, I was not totally weary, just normally tired and windswept. And well, I was hungry too, so after arriving to Lemvig I found a 7-11 and ate a foccacia-thing and bought beer for my supper. The clerk was friendly and explained to me the way to a bicycle mechanic. I had, in the meantime abandoned the idea of cycling to Thyborøn via Harboore the next day and instead stay in Lemvig and get the bike repaired before the train ride home in the afternoon. There were only a few meters to bike-Mads, who opened at 9 the next morning. So it was settled. Now I rolled down a steep hill towards Lemvig port. Lemvig has a lower and an upper town, in which the station is located, I found. Then I went out along the coast to the north of the lovely sheltered from westerly winds by a cliff and out to the campground via a holiday resort and a marina. 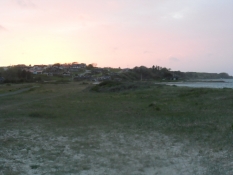 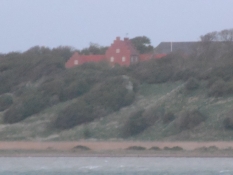 Here I was kindly received. The site seemed very modern with new buildings. And large! After a very detailed explanation of how I best found a place in the best possible shelter, I headed down towards a thicket and put up the tent. Yes, it really was almost calm while the wind shook the abandoned caravan tents on the campsite, which is situated right next to Lem cove. Yes, that is, of course the name (Vig means 'cove' in Danish). In yet a completely new service building, I got me a long hot bath in a family room, and then it was time to make dinner, which was tomato soup with pasta and mincemeat steaks from a remaining lump of meat from yesterday. It was very plain, but food tastes so good when you have done something physically. Although the kitchen was very modern, it was very sparsely equipped. There was nothing except the cooker. Well, I was doing allright and then made the dishes afterwards. Even though I might think I had enough fresh air that day, I went for a walk down to the water. There were great views to the opposite shore of the cove and beyond it accross Nissum bredning. To the west the sun went down over a high hilly part with several holiday-like facilities. Jutland is wild and violent out here, I thought. The hill I would avoid the next day. Unfortunately I would also miss out the west coast, Harboore spit and Thyborøn. Too bad, but I could live with it. Much worse was the text message I got from Tina while I walked. Her father had been admitted to hospital with a cerebal thrombosis, and he was paralyzed on one side and could hardly speak or swallow. Oh, it gave a lot of sad thoughts. I had known him for 14 years while I was dating and married to his daughter. And it's my boys loved grandfather. Sad, sad. On the way back I made a stop on the campsite TV room and watched the 22-news on TV 2. But I thought most of Johannes and Ebba. After a bit of hassle to find my wallet I hit the hay at about 11 and fell into a deep sleep inside the sleeping bag inside the tent. Typically I always sleep better on the second than the first night in my tent.