The heatwave just goes on and on. And the sun shines all day long.

A day almost exclusively on gravel paths along the river and through forests. Two detours into towns on tarmac roads.

I make a morning trip into Neuf-Brisach and have a look at the fortifications before breakfast. After it I have a shower in the lawn sprinkler on the campsite as it's unbearably hot. We pack and go past the Rhine bridge again and continue our northbound ride through the forests along the Rhine. We fill up our water bottles at a football club, where I fall down some concrete steps and hurt my leg and foot and break my watchstrap. Ouch! The lack of water becomes a problem today. We have some problems finding an open shop in order to buy some lunch, but we finally succeed in Oberhausen and enjoy a luxurious lunch break in an open hut on the very river bank. I have a swim in a stream away from the Rhine with very strong current, while Simon's having a nap. After some hour's ride we're really thirsty, and are saved by a woman who lets us fill our bottles from a tap at a yacht club. We bought some cake at Meissenheim, which we have with coffee at a lake som kilometres away from the route, but we needed to cool down and have a swim. Fairly late arrival at our goal of Kehl, but I manage to do some extensive shopping at a supermarket and prepare dinner in the camping kitchen. We have dinner at the tents. Relaxing outside the tents. It's a perfect summer night. 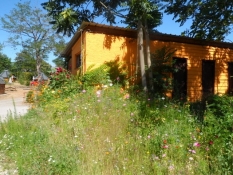 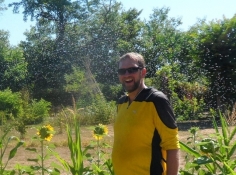 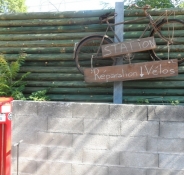 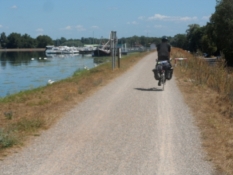 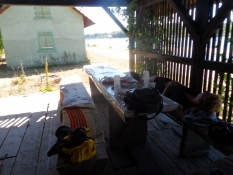 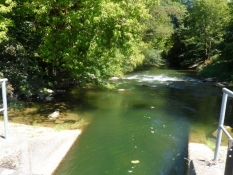 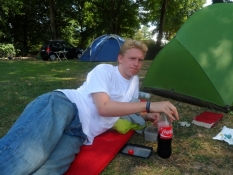