The breakfast at the hotel was plentiful, but could not compete with breakfast in the Chambres d'Hôtes. But the staff was very friendly and very endeavored (water for the tour, air pump, chain oil, photo,...).

Directly opposite the hotel we could turn on the bike path at the canal and cycled along it. 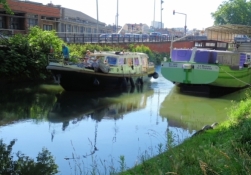 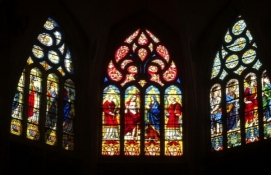 Our first destination was the Cathédrale Saint-Étienne. The very unusual unbalanced floor plan had already surprised us last night. Inside, the eastern part is gothic and dominated by a huge stone altar. The western part looks much less filigree, even clunky. The most impressive is the altar. 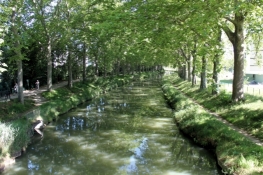 The way back to the canal was short. Initially, the building density of the city is still visible through the trees. Then it is getting greener. Due to the sunny weather, the channel appears friendlier. The sun was playing with the leaves of the trees and the water. When a boat causes waves, this was particularly obvious.

But the repetition of perception also set in again. The canal, the trees, the boats, occasional views of the landscape.

Better in a technical sense was the bike path. The surface is noticeably smoother on the first 40 kilometers. 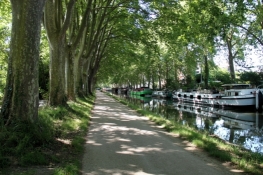 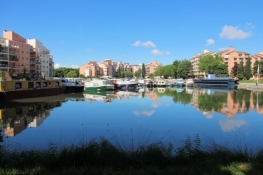 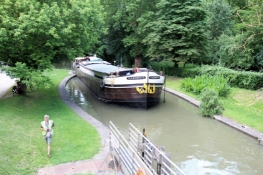 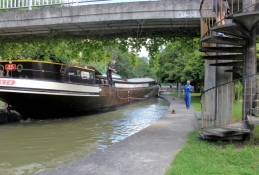 Near Labastide d'Anjou we left the canal for 1.5 km and turned onto the road. Then it was a short piece uphill and beyond the highway along the hillside on the road with beautiful views of the surrounding countryside. It was anyhow a nice change to let our gaze wander into the distance.

Back on the canal, we could see that the avoided path along the canal looks very suitable for cyclists, at least in the last few meters. It might have been cyclable however.

The further route to Castelnaudary was again on a paved road. 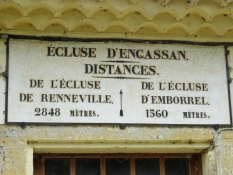 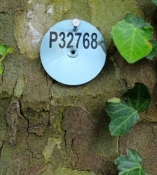 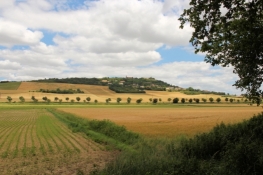 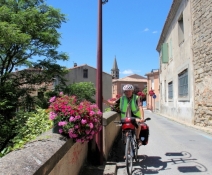 In the village we cycled to the tourist information office and inquired about the overnight accommodation in Bram. We decided to continue to Bram or even until Carcassonne.

The church Collégiale Saint-Michel could only be visited on certain days, but not today.

Back at the canal, which takes the width of a lake below of Castelnaudary, there is a very nice view back to the village, dominated by the church. At the outlet of this lake three locks follow directly after each other. These probably overcome twelve to fifteen meters in height. 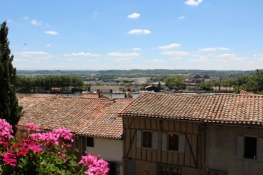 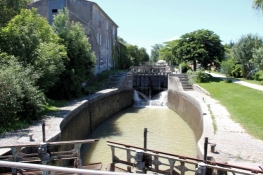 Two kilometers further, the paved surface ends. At the beginning a water-bound surface with larger amounts of chippings. Then it got mushy. From the hillside to the left of us water is running on the way. Partly the way is no longer ridable due to the mud. But the pieces to push the bicycles are short. And all this, although it has not rained for several days.

Thereafter, the surface was better again, but remained interspersed by potholes and spots of chippings. Except for a short distance of eight hundred meters, this remained the same until the branch to Bram.

From the port of Bram to the historic center, it is less than two kilometers. After a quarter of an hour we had found a very nice Chambres d'Hôtes in the village center.

A walk around the medieval center took only a quarter of an hour, it is that small. The narrow streets around the church were almost all decorated with perennials and potted flowers. It was really pretty. 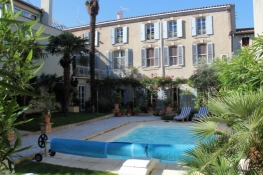 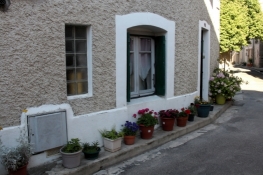 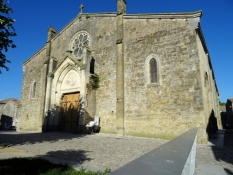 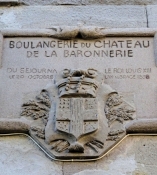 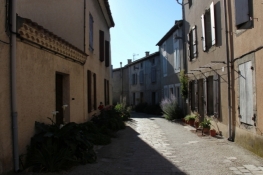 For dinner there was a large (31 cm) pizza from the pizza service around the corner. Very tasty and plentiful. In the garden of the Chambres d'Hôtes we enjoyed well chilled whitewine in a wonderful atmosphere.