In the early morning sunny, then increasingly cloudier.

In Apt, as a start we rolled down the hill into the town and then on the other side, to warm up, we pedaled strongly up the slope to the railway line.

Then we cycled for about ten kilometers without significant slope up the valley of the Cavalon. When we reached road D48, the railway line terminates and we continued on the "Autour of the Louberon à Vélo" as a temporary route for the EV8. A little downhill to the valley floor and then up for 50 meters of altitude. 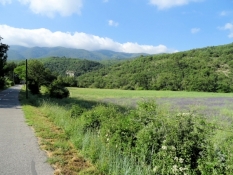 In the Cavalon valley 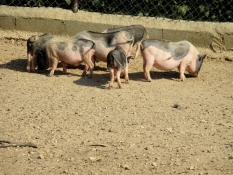 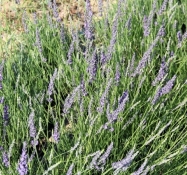 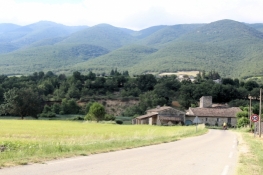 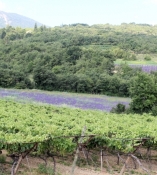 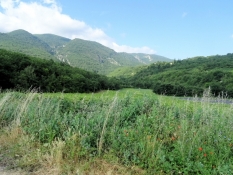 The area is again intensively used for agriculture. Arable farming and fruit growing dominate. In between some lavender fields. The first ones we saw had already been harvested. For ten kilometers it was an up and down on the side road. We also passed several blooming lavender fields. Very nice against the backdrop of the green mountains. 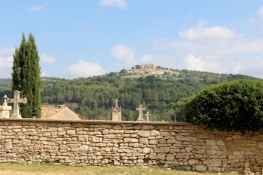 Old villages along the cycle path 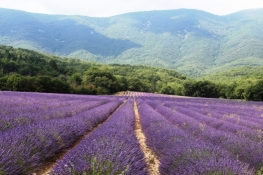 Snails in the grass

Then we returned to the main street of the valley, road D4100. But just in front of it, the cycle path bends sharply to the right and ends in a side street, on which it was about 100 meters of elevation uphill. Shortly after the highest point, the new developed areas of Céreste begin. We could let it roll again. In the village we passed the weekly market. Then we cycled through the valley and over a small bridge from Roman times to the former railway line. But we let the railway line on the right and cut off a bit on the paved side road. Soon we had to cycle up the slope again. And back downwards to the former Prieuré de Carluc. From the priory essentially only the church building still exists. The priory is located in a lonely valley.

Another 100 meters of height upwards were necessary to get to the village of Reillanne. On the main square was weekly market and we provided us with fresh fruit. We were tempted by the idea  to cycle up to the chapel Saint-Denis on the top of the mountain. From there you had a great view over the valley of the Cavalon and the surrounding mountain ranges. The chapel itself was closed. It must have been part of a fortified facility around the mountain peak. 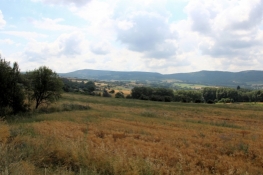 In the valley ahead of of Reillanne 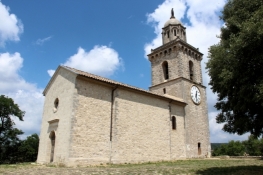 Behind the village again uphill and then through forest a lonely valley a long time down to road D4100.

For five kilometers, the route of the EV8 is now on the main road, but the traffic was less than expected. A short piece on road D5 and then we rolled down the valley towards Biabaux. There we came back on the railway track, which is well asphalted again and which led us to Dauphin and beyond. There we turned off the signposted EV8, cycled a short distance through the village of Saint-Maime and then turned onto road D13. Again, the traffic was not as strong as expected. Due to a construction site it flowed in small convoys down the valley. Before Volx we met again the EV8, which comes from the left, and we turned right here in direction of Volx on a side street. It went up a bit uphill into the village, then on bike paths beside the road down to the canal. 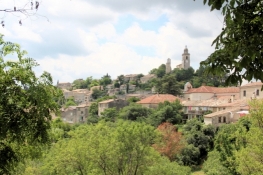 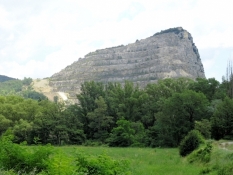 A whole mountain as a quarry

For almost four kilometers we cycled on roads that looked more like construction roads, near the canal to the southwest. Then we continued on side roads to the Manosque train station. We wanted to clarify the departure times of the trains tomorrow morning and to make sure that the SNCF employees do not have a strike day. That was done quickly.

Now there was still the accommodation to look for. The Chambres d'Hôtes near the train station did not exist anymore. The hotel a few meters further was fully occupied. The lady in the tourist information was very reluctant in the clarification of the accommodation issue. So we sat back on the bikes and cycled to the two hotels which we had listed in our tour book. At the first we got the last free room.

The city walk was short. There are two Romanesque churches in the old town. Both impressed with the simplicity of the interior and the perfection of the Romanesque architecture. Otherwise, there were some pretty streets and squares. 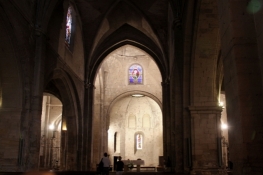 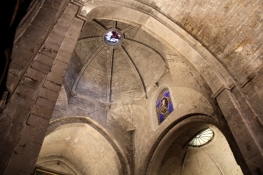 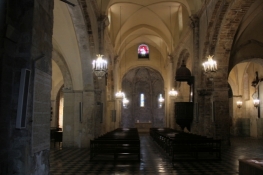