Sunny with a few small clouds.

We slept very well in our hotel. But the awakening was necessary earlier than usual, because the train ride from Manosque to Meyrargues was imminent. At 8.00 o'clock we were on our bikes, at 8.34 o'clock the train moved off.  Prior to that we had to carry the bicycles across the bridge from track 1 to track 2. The elevator was out of order.

Twenty minutes later we had come 28 kilometers forward to Meyrargues. This was a recommendation from the "Carnet de route" for cycling the EuroVelo 8 in 2018.

From the train station in Meyrargues we were on a side road after a few meters and soon cycled along the canal to the east. On the slightly busier road D561, we could safely ride the one kilometer on a lane beside the road before we returned to side road (D61) via a narrow connection path. On this road we cycled to Jouques, almost without traffic. There we crossed over to the other side of the river and reached via the Avenue de la Gare the first piece of cycle track on which we stayed for three kilometers. This we followed for 2½ kilometers on the now less frequented road D561. The valley is incised and especially on the left was a karst area.

Then we left the local road to the left onto the former railway track. Here also begins the signposting with the logo of the EV8. The landscape becomes more open and the agricultural use more intense. After about five kilometers we reached Rians. The church could be seen from afar on the hill, including the houses of the old town.

For a very short distance we had to go on road D3, then again we were back on the rail trail for another two kilometers.

Then the signposting of the EV8 led us to the right into the hills. Here, after a few meters at a junction, the signposting was missing. Both directions lead to the same point, the left way is a bit shorter. Almost fifty meters in elevation we cycled uphill, the last part shady through the forest, and then we quickly were back down on road D561.

In the hills east of Rians 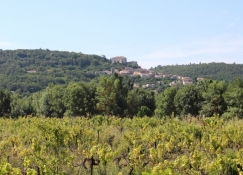 After two kilometers, the signposting is straight ahead. But from the left a bike path is coming from a railway embankment paved with asphalt. We chose the rail trail and are on a decent bike path.

After a short stretch of slight ascent, the bike path drops 25 meters before ending at a gate. A continuation on the railway track was not possible. Instead, the route is on a side road and gains 35 meters in elevation again. In front of us on the hill we saw the Château de Saint-Martin-de-Pallières and the houses of the place with the same name.

We arrived back at road D651. After 600 meters a misleading signposting. It indicates the bike path to go straight ahead, but it is situated in front of a bend of road D651. Meant is to stay on road D651 and do not take the straight-ahead side road.

Road D651 loses elevation quickly, for eight kilometers we rolled down the valley. At the beginning through fields, then through a woody valley. Here, the former railway track is repeatedly to see as an overgrown embankment to the right of the road. Not far from Varages the road climbs again. At the beginning of the village again an insufficient signposting. Obviously, a bike path comes from the left. Where we should continue cycling is not signposted at all. Correct is the road to Barjols. For this we had to cycle uphill for another 50 meters of elevation. From the top we had a beautiful view over the coniferous covered valley. One kilometer behind the highest point, the cycle path turns right onto a side street. Fields spread out to the left, in the background the town of Tavernes. On the right sparse forest / bushland. In Barjols the cycle path turns left at the second roundabout. We had overlooked the signposting and had to cycle unnecessarily back uphill.

After the hill behind Barjols the bike path runs for one kilometer on the railway track on the right (south) next to road D650.

The signpost led us to the right onto the side street and thus up the slope. Above us, the towers of the former castle of Pontevès rise to the sky. After 35 meters of elevation, the steady rise turns into an up and down. We cycled alternately through woods and fields. Then we came back to road D560 which we followed this for 7½ kilometers. 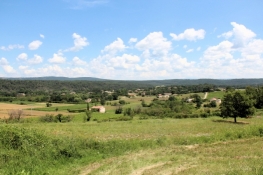 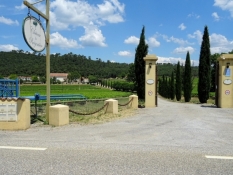 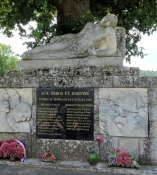 Not far from Sillans-la-Cascade we left the road and followed the now-developed rail trail for seven kilometers. At the end of Salernes, we did not follow the signpost, but rolled a short distance on road D560 down to road D2560 and continued down to Salernes. In the main square of the village, many people lingered under plane trees in the cafes and restaurants. 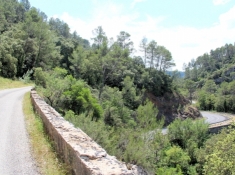 On the bike path EV8 southeast of Salernes

On the bike path EV8 southeast of Salernes

Behind Salernes we continued for 22 kilometers on a developed cycle track. The surface is asphalted throughout. We cycled everywhere through a sparse needlewood forest, passing through fields and settlements. At the end we passed three short tunnels.

Below Flayosc we turned onto a path up to the village. The bad asphalt and the slope forced a pushing of the bicycles. Once at the top, the center of Flayosc with the church of Saint-Laurent was photogenic in front of us.

Looking for an accommodation was once again a bit more extensive. One landlady did not want to let rooms for less than two nights, another declared full occupancy, although free capacity was shown on the internet. No one knew where the tourist information is located in village. We finally found it in the media library. There, the staff spoke only French. Nevertheless, we managed to find an accommodation. Although expensive, but very nice.

We bought food and beverages for dinner in the village and consumed it on the terrace of our room. 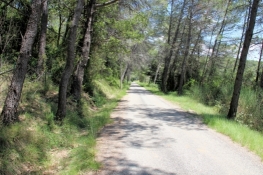 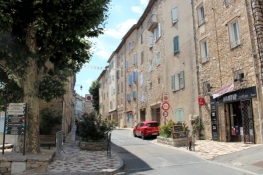 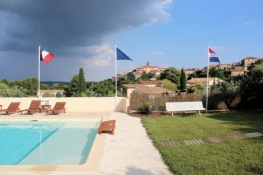 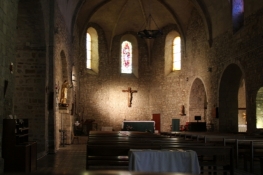 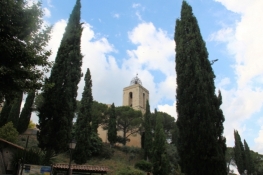