The fourth and last day of the four-day introduction to the Iron Curtain Tour from Naesby to Klaipeda.

Arrival to Klaipeda harbour the following day at 9:00. 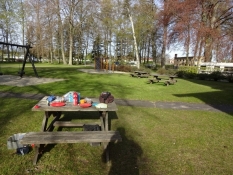 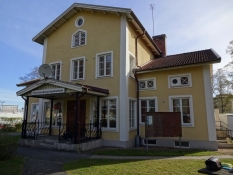 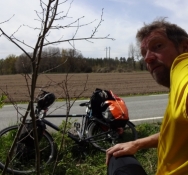 Frokost i vejsiden/I have my packed lunch at the roadside

4.5. Kl. 9.10 Dear lifeline. Yesterday, I did not reach my stage goal for the first time, but I had to go 30 km less, which I have left for today. Isn't that wonderful? I want to reach the ferry to Klaipeda at. 6pm and have 65 km, again in brisk headwinds, as it seems here at Charlottsborg campsite in Kristianstad. Have slept best of all nights in the tent. May it be the 2-3 beers I got at O'Leary's pub along with the cl match? There is also a hostel here which facilities I can use. A lot better than the woods yesterday. But both are lovely. The latter as long as the sun shines. And so it has done all the way from Korsoer on Monday. How lucky! Wind direction and strength I have not been so lucky with. Well, I hope to build a good shape. Now I have to get going. I write to you from Lithuania. Yours H 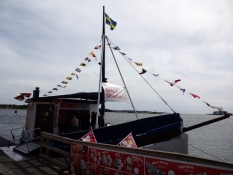 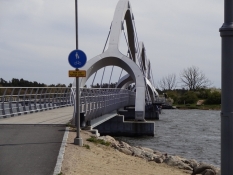 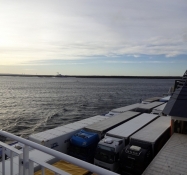 I had planned an easy day, almost a rest day, with 35 km easy-peasy cycling along the flat coast from Valje to the ferry port of Karlshamn. And indeed I was happy to have planned this buffer at the closing stage of the introductional part, because then the  "debt" of 30 kilometres (a term I was going to be well acquainted with in Latvia) were a negotiable distance to venture on a day, when the wind blew even harder from the East. A strong (head)wind was on my menu today, so that menu turned out a lot more opulent than planned. My packed lunch I tucked into precisely after 20 km. The wind blew a ploughed acre's earth away in an enormours cloud of dust. So I had put down my bike, which lay on the side at the roadside, while I crept into a shrubbery for shelter. A few moments later a car pulled over on the road and an anxious woman came by and asked me if I was okay. And I must confess that the upset bike easily could look as if an accident had happened. So I thanked her for her caring attitude and moved the bike closer to the shrubbery. So nice, when a human being shows that kind of care for an unknown fellow human. I think, this could have happened anywhere on the Iron Curtain Tour, but as it was it took place in eastern Scania/Sweden. After a huge paper mill at Nymoella, where I greeted a fellow tour cyclist in the opposite direction, I was soon at the coast at Valje, where I didn't go to the camp site I had planned to stay on the previous day. In stead I cycled on to Soelvesborg harbour, where I saw a peculiar boat called Sillabaaten. That means 'the herring boat', and they indeed sold herrings, but everyone I saw, myself included, bought big ice cream cones. I did not see any fish flavour ice cream, though. I also had a cup of coffee. It wasn't easy to handle the melting ice cone and the flimsy cup in the strong breeze at the harbour. Luckily the herring boat didn't sway. The next attraction was nothing less than Europe's longest bridge for cyclists and pedestrians, which spans across the fiord at Soelvesborg and carries the cycle route further along the coast. Now I had the wind from the side, but soon after I turned to the East again and had it right into my nose again. I thought about the crossing on the Baltic Sea the following night and that I'm so easily bothered by seasickness. Therefore I put the anti-seasickness plaster, my loving wife had bought for me at home, behind my left ear already now, as it requires some five or six hours time before it has an effect. But the first part of the crossing would be near the Swedish coast and only later the ship would cross the open Baltic sea directly to the East to Lithuania. Before I got there I had yet some hours of Blekinge ahead. Along with Scania and Halland this Swedish county once belonged to Denmark until 1658 and the worst Danish defeat in the Swedish wars of the 17th century. Here I was especially happy for my GPS device, which exactly told me the distance to the ferry harbour and MS Athena Seaways. In this way I was not bothered by the fact that I had to be at the ferry harbour no later than at six o'clock. I wanted to arrive there with an hours safety margin, which I managed without problems. Thus, it was a content and somewhat tousled cyclist who wheeled his aluminium fiancee into the spacious bowels of the huge ship. I had booked a common cabin, where two Lithuanian men already had arrived. They both spoke English fairly well, but when I suggested Russian as our language of communication, one of them was fine with that. The other one actually spoke Swedish quite well, as he was a long time worker in Sweden and on his way home to his daughter's wedding. His name was Armandas and we had a good chat after dinner, which was included in the ticket fare. I ate with an enormous appetite. You're never shy of that while on a bike holiday, that's for sure. In the bar there was a cosy relaxed atmosphere and everybody was chatting and idly drinking beer. Outside on the deck it felt like a gale was blowing, and the ship began to pitch rather violently, so I went to bed. Before that Armandas found the weather forecast for the next day on his cell phone, and it was a nice surprise: Sunny weather, light winds and pleasant temperatures. Knowing that and thanks to the seasickness plaster behind my ear I slept reasonably well the whole night, despite the ship's quite disturbing movements in the sea. 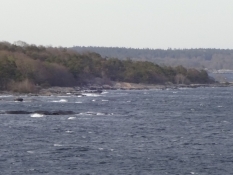 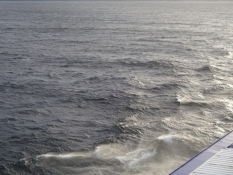 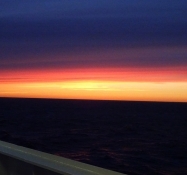