A mix of clouds and sunshine, reasonably warm temperatures, light to moderate winds from North, so a light headwind at times.

Text message, May, 21, at. 8.10: Goodmorning, dear group of followers here. I am a bit early up today, as Estonia's running out now and I'm entering Russia in a few couple of hours. It's a long stage and maybe the border controls require some time. My goal is to cycle to Gorki Golf Club on secondary roads, halfway between Narva, where I am now, and Saint Petersburg or Piter, as the city's nickname is, where I intend to arrive tomorrow. Linguistically I'm already in Russia. The town's background is Estonian and German baronial, but the Estoanians were sent away under Stalin and were not allowed to return after his death, while the Russians took over. My route will be Narva-Ivangorod (the town on the other side of the river Narva. It has also a large fortress down to the river)-Kingisepp-Alekseyevka-Koporye-Lopukhinka. The stage yesterday was easy and beautiful. A road along the coast high above it with a waterfall (I like these!) was the highlight. The sun shone, it was chillier, but still around 20 degrees Centigrade and almost no wind. In Sillamae I "admired" the socalled Soviet barocue style, the town's built in.It didn't exist officially then, as the Soviet Union produced nuclear fuel rods for atomic power stations and nuclear submarines here, as the soil is rich of uranium. Now I want to get up and conquer Russia on my aluminium horse. The cavallery must never be underestimated. A humiliating visa control comes first. Wish me luck. I feel like the adventure starts for real now. Hugs from Helmuth. 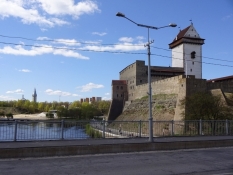 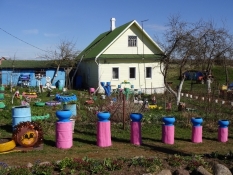 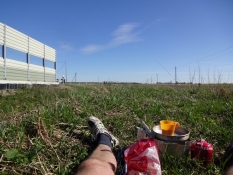