A fine bike path on the Lithuaninan half of the Curonian spit. The tarmac is somewhat run-down and thus bumpy, and near the city I sometimes encountered broken glass on it. Good signposting, also to sights off the route. In Klaipeda itself there are also many good bike paths, however, with many obstacles that slow down one's speed.

First stage. Leads from Klaipeda ferry terminal into the old part of the city and from there via a bicycle ferry across the mouth of the river Nemunas to the Curonian spit, where I spent far the longest part of the day. 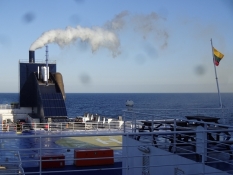 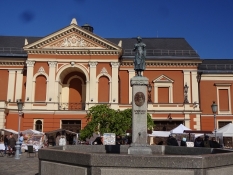 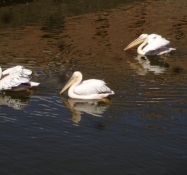 At 9 o'clock Lithuanian time, the DFDS ferry M / S Athena Seaways moored in Klaipeda's ferry terminal. I had slept okay and had enjoyed a good breakfast, so now I was ready to experience Lithuania. In addition, the sun shone from a cloudless sky, albeit it was rather cold. The first stop was at a Maxima store in the southern outskirts of the city center. As I had to limit the luggage in the Flix bus from Odense to Copenhagen, I carried no food with me, and therefore a good piece of shopping was needed. A poor bounty who spoke excellent English (??) watched me pack. I gave him a two-euro coin and feared he would call all his combos, but he just said "thank you and good luck" and sneaked off. The first stop in Klaipeda's beautiful old town was a peaceful square with a tower of cast iron with pictures where I relaxed in the sun. While I was sitting there, a group of German tourists walked along. They were all elderly, and their Lithuanian guide explained in lame German the tower's symbolic meaning. So I got it also. A few steps further I stopped at the beautiful theater square with the von Dach well with the poetry figure Annchen von Thurau. You have no doubt about being in an old German town, although this is so long ago, and was named Memel that none of the older German tourists on the other square had experienced it. It is 101 years ago (in November) that, after losing World War I, the German Empire lost the city and its upland to the League of Nations and from 1923 to the newly formed Lithuanian state. There was a market going on in the square, and I wanted to linger, but still went on to the harbor in order to catch the bike ferry over to Smiltyne on The Curonian Spit. There was some waiting time, which I spent on a bench in the sun, buying a ticket and talking to two Belarussian cyclists on racing bikes and with quite large backpacks. On the ferry an ice-cold wind was blowing, but in Smiltyne it was quiet. Both with regard to the wind and the noise levels. After few pedal revolutions to the north along the road towards the Kopgalis fortress, I was all alone, since the maritime museum and the dolphinarium out there had closed as it was Monday. Fine for me. Then I had the space for myself and could look at the pelicans in the moat in peace. I ended up at the tip of the headland, but eventually it literally ran out into the sand for me, as it had blown in heaps across the path and stopped my progress. On the other side of the river, Klaipeda's large and busy harbor facilities lay. Indeed I cycled to the north and in the wrong direction, so I turned my bike around and stepped onto the national Lithuanian cycle route # 5 to the south. I knew its counterpart to the north, from Klaipeda to the Latvian border, from my Iron Curtain tour, part 1 and that it's outstanding. Dutch conditions as I call it, when it's close to perfect. But some broken glass on the tarmac trail made it miss that mark. I had a headwind, but behind the high dunes and inside the dune forest it was no obstacle to me. A lovely bike day had begun in a lovely way. 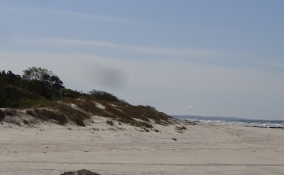 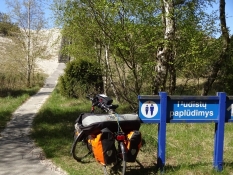 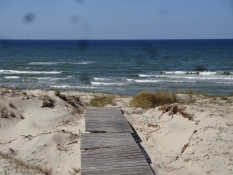 Ingen andre naturister i sigte/No other naturists to be seen 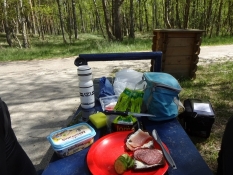 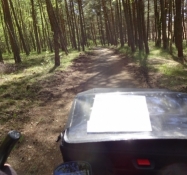 Just ten kilometers down the spit, I felt hungry, so a sign saying "Nudistu papludimys", which I interpreted as a naturist beach, and a table-bench set next to it, was very welcome. First the bath! There were no other naturists than me on the wide sandy beach in front of the dunes, which were passed by way of wooden stairs. Outside these, it was forbidden to walk in the dunes. On both the Lithuanian and the Russian side of the Curonian Spit there is a nature reserve with limited access outside the paths. However, the beach is free area and extends with the finest sand several hundred kilometers to both sides interrupted only by a few  towns. After my skinny dip I had lunch in the sun with self made sandwiches from the purchased rations. Lovely. And I wasn't the slightest bit cold. After a rest on my back in the sun, I rode on to the south. The asphalt was a bit worn and bumpy, but this was the only negative thing. Everything else was a pure bike paradise. I didn't see any cars. Only light-open forest with views to dunes and meadows. So I cycled for several hours and enjoyed it fully, until a certain thirst for coffee appeared. But one thing I had forgotten to buy was instant coffee in order to make coffee on the gas cooker, so a sign for the village of Juodkrante on the lagoon side of the spit  was welcome. I guessed there would be a a cafe. And I was not disappointed on this fine, fine bike day. First I rode through a lovely seaside resort with old well-kept wooden houses and then a café appeared on the main road, where the bike path followed the water. Here I sat in a beautiful flower garden and was served carrot cake and coffee. For "dessert" a red ale from Klaipeda. Aahh! In the air, many midges swirled, and that was probably the reason, why the other guests all went inside, but the insects did not bother me much. After all they don't sting. 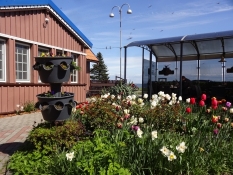 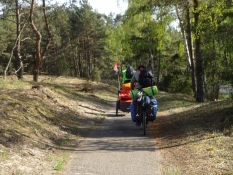 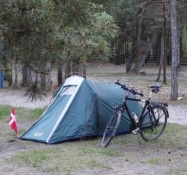