In the morning overcast, later sunny and fairly warm. The winds were moderate from the north, so some headwind in the end, but no obstacle to me.

The morning at Eaglet campsite on Sobieszewska Island was one of the quietest and most peaceful of my life. Lying on my back in my sleeping bag I had the idea of packing my stuff quickly and ride into Gdańsk in a hurry. But as soon as I zipped up the awning, a lovely calmness fell upon me. The birds sang in the tree tops, the weather was nice, no people or for that matter animals around me. Aahhh! Not an eye in the big bathroom for gentlemen. You could have walked naked around without annoying anybody. But this I did only on the beach for my morning bath. I never understood the idea of taking off one's clothes in order to put on trunks. A single dog walker may have thought his thoughts. But as I can't read thoughts or understand Polish, I let it be. Breakfast, which consisted solely of muesli with semi-cold milk, I also made a long lasting experience. And my for a man quite extensive morning toilet was also in slow motion. As I packed my clothes in the tent, I suddenly heard voices. I stuck my head out and saw two retirees leaning on their rakes. After a while, they raked some pine cones together. Then they rested and talked. And raked again. I was so happy to see them. Two male specimens of the species homo sapiens at the same reduced pace as myself. It was just before I went asking them if they had a spare rake. But crept into the tent again. And then one of them came to me instead. With a message in German that his boss liked to see me down at the reception. I had completely forgotten the check-in! This also took place at a very leisurely pace. After I had walked very slowly to the reception. The corpulent camp manager sat like a king on his throne, while I sank deep into the arm chair in front of his desk. He wrote down all my contact and accommodation details in neat handwriting, while he in German asked interestedly asked questions about my travel route. He really liked being a boss and loved campers, especially cyclists. And as I was the only one, all his love was volleyed at me. Eventually, however, I had to continue, thanked many times for his kindness and finally had everything packed. The weather had worsened during the morning. It was now cool, cloudy and windy. Not before about 11 o'clock I rolled out of the gate, ready to conquer Gdańsk on my faithful iron horse. 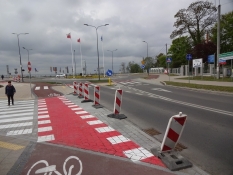 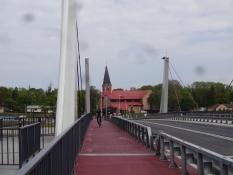 The 18 kilometers into the center of Gdańsk turned out one of the finest cycling stretches in my whole life. And after all, over the years I've cycled into a lot of big cities, and know that it's never quite easy. But that's what it was here! Easy peasy! On fine, newly established, completely finished bike paths along large roads into the city, special traffic lights for cyclists and fine tunnel solutions. One tunnel under a motorway could not have been better constructed in the Netherlands. Which, in my opinion, is definitely Europe's bike country no. 1. My own country Denmark I would rate second. Now challenged by Poland! I hadn't seen that come. But okay, Gdańsk is not Poland. I'll must to go to Warszawa one day soon. The whole route I had plotted on my GPS, and everything just fit as it was planned. First proof of my new rating of Gdańsk as Europe's second best cycling city after Rotterdam (and in front of Amsterdam because of the f*ing pizza mopeds there), came before and on the bridge across Martwa Wisla, Dead Wisla. The red cycle path led around the roundabout and on a separate cycle path across the bridge, where it continued on the other side. Of course, the comfortable tail-side-wind made it better. So after just over an hour I had my buttocks safely placed on a comfortable chair in a bakery cafe and enjoyed a large cup of coffee with the morning rolls, I had missed on the campsite. 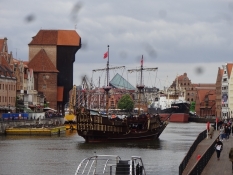 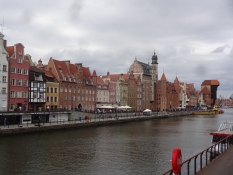 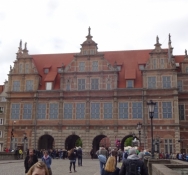 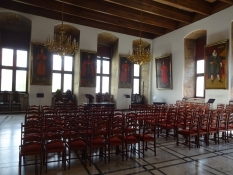 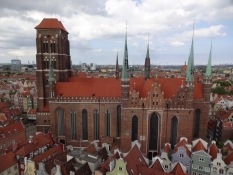 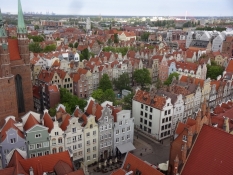 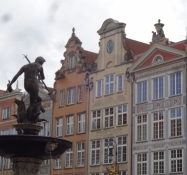 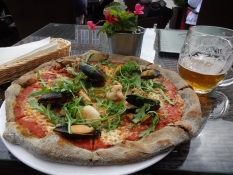 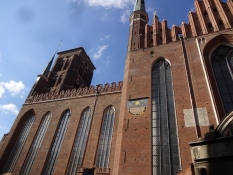 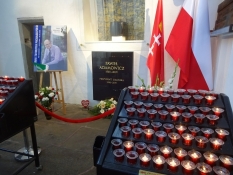 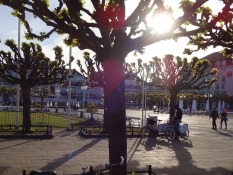 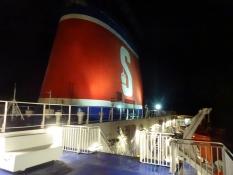