Changing sun and clouds, in the afternoon overcast, but it brightened up in the evening. Cool, about 20°C. Almost no wind.

Road into Steeg without a bike lane, but only light traffic. The last stretch on a steep cul-de-sac without traffic. Trip into Warth (just me) on a road partly with a bike lane. Yet another trip into the mountains on a rocky path, more suitable for mountain bikes.

Rest day in mountainous environment. Three trips ridden by me, two by Simon. We got the bikes in Steeg, made a trip into Warth (just me) and a mountainbike-like trip into the mountains, where we had to leave the bikes and go on by foot. 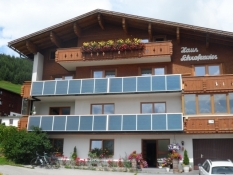 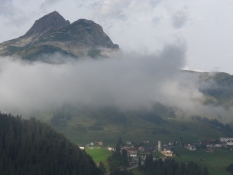 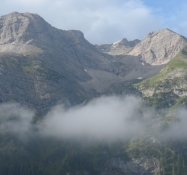 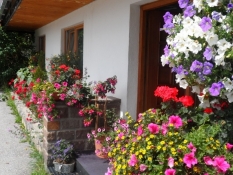 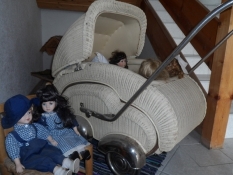 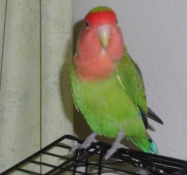 It was great to wake up in a real bed and think it was a day of rest, and that Simon and I had no big plans for it. The only obvious thing was to get our bikes down in Steeg. The rest was up to our wishes and the weather. I started the day by going for a walk on foot around our pension before breakfast. Simon was still asleep, and I let him sleep.

As soon as I stepped out of the parking lot in front of the house a stunning Alpine panorama opened. And it was absolutely quiet. We were up at over 1500 meters altitude. I walked over to a bench and looked out on the mountains for a long time. In front of me the terrain fell steeply towards the Lech river valley. The river itself I could not see. Behind it the mountains rose with an adjacent valley from the south. Just to the right there was a double mountain with two peaks, Mittagsspitze and Kleine Rappenspitze. Further to the right, or west, lay the village of Warth with its pointed steeple. I tried to follow the path that we had to ride up tomorrow over the entire Alpine Tour's cycling peak of Hochtannbergpass, which levelled out at 1,675 m, but could only see that it disappeared into a so-called avalanche gallery, that is a roofed road. Not very pretty, but effective against the danger of the road being covered by snow in winter. After looking out across the beautiful mountain panorama I went for a little walk. The cul-de-sac ended right here in a parking lot, and continued in a small mountain path past something called the climbing garden Schrofenwies. Here learning climbers learn to climb on the rocks with the necessary safety precautions. A little farther on there was a very beautifully situated barbecue area, before the path forced a fence and went down across a large meadow. I sat for a time on one of the benches. There was firewood in a small woodshed, and I thought that here Simon and I would make a barbecue tonight. If the weather allowed it. Right now the sun was shining, but there were also some clouds, which up here in the mountains were more down in the valleys than up in the sky. The high mountain range to the north was completely wrapped in clouds, so I could not see their tops.

When I came back to our pension Simon was still asleep. He also enjoyed sleeping in a real bed and be on his holiday. But I had to rouse him, because we had agreed to have breakfast at 10, and he had to wake up and get dressed first. We agreed to meet upstairs in the breakfast room. First I looked around a little in the house, which was decorated very traditionally with beautiful, old knick-knacks. In the hall stood both an old sewing machine and an old pram with dolls with porcelain heads. I think my mom had played with the like, when she was a little girl. I also stuck my head into the kitchen and asked for permission to chill some food in their fridge, and that was okay. In the breakfast room one couple from Germany were already seated. It turned out that they were veterans of the place and had come here for 14 years. Later, a young Austrian couple from Vienna joined us. They said they had fled from the heat in Vienna, where there had been record high temperatures a couple of days ago, more than 40 degrees. Soon Simon appeared and we enjoyed emptying the breakfast buffet with everything our stomachs and tongues craved for. We also talked about our cycling holiday, and the others were a little impressed, we cycled in the Alps. Simon tried also to speak a little German. The other two couples had plans for a mountain hiking. We talked a bit about the weather, which seemed a little uncertain today after the long period of stable high-pressure weather. So they did not want to venture too high up on the ground. Frau Lechleitner had a busplan of the bus to Steeg, in order to get our bikes. Right now our cycling holiday was suspended for a while. So Simon and I went down to our room and made ready for walking down to the bus stop at the bottom of the valley. 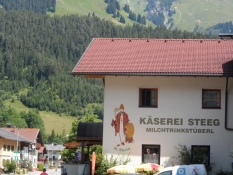 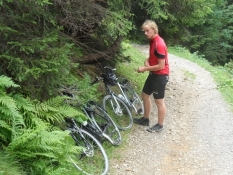 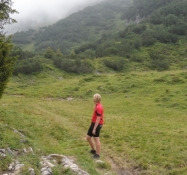 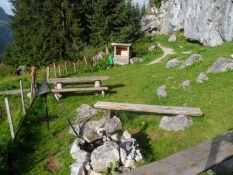 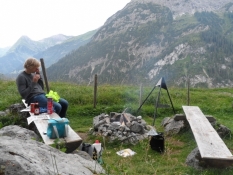 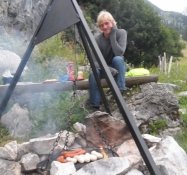 Now it was time to prepare our barbecue. We both thought we should try and hoped it would stay dry. The place was so nice up on the hillside, and it could be a kind of climax to grill, eat and drink in the beautiful surroundings. It took a while to get the fire burning and make charcoal, but then we had time to talk and let the previous alpine tour flash back before our eyes. It was great to relax after a good day in the mountains, and fortunately it stayed dry all evening. It even brightened up so that we could see all over the mountain panorama. At one point some hikers came waddling across the meadow and over the fence at our barbecue area. At that time we had put sausages on the grill that smelled nice. We could see that they were hungry, for they looked enviously at our barbecue. But they had a few miles left before they were in Warth. The path they walked on, is called Lechtal hike route, and it led down to Steeg. This trail we could have hiked down to pick up our bikes in the morning, but Simon had not been up to it. And in that case, we certainly had not tried to walk up to Schrofenpass. When the sausages finally were ready, we enjoyed them tremendously. I thought that now the cycling holiday would soon be over. Next day we had to ride the last stretch up to Hochtannbergpass, but most climbs we had already done. And it had gone well all the way until now. We sat for a long time chatting until it began to turn dark. So we packed our things and went back to our pension. The bikes we put into the garage, and the day ended lying on our backs on the bed watching television. It had been a wonderful day.