Train transport from Odense to Skanderborg in the morning. From about 11.20am biketrip to Vedsoe Campsite, where I arrived at about 5pm. In the evening, at about 7.30pm I biked into Viborg, where I stayed until at about 10pm and cycled back to Vedsoe Camp. 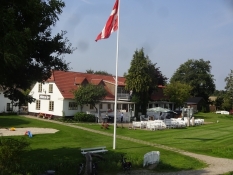 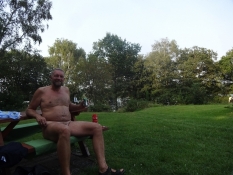 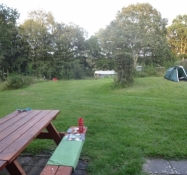 Masser af plads på campingpladsen/Lots of space at the campsite

An elderly gentleman kindly welcomed me at the gate when he had made sure I was a member of a naturist association. From the camp's website, I knew that one had to be a member of one and that was because they wanted to avoid curious people who just wanted to look at naked people. His name was Herluf and he followed me all the way to the site where I could pitch my tent where I wanted to. No other campers were present so far, he said. And he hardly expected more. So it would be a very peaceful and quiet stay. A little socializing with like-minded people I could well have wished. First I was shown the facilities which were quite excellent. Both fridge, freezer and hot water besides the normal amenities. For Herluf it was a good thing I had appeared, because then he discovered that the freezer relay had switched off in the thunderstorm they had had the night before and thus he avoided all the frozen goods thawing completely. And I could get my cool clamp frozen and keep milk butter and meat chilled tomorrow as well. For the time being, I just drank cold water from my heart's desire and stripped the sweaty bike clothes. Now I was ready for another bath in a lake, this time finally in my birthday suit, like I enjoy. Alas, all alone. But it was nevertheless nice to have arrived and relax and read a little in the leafletst camping dad Herluf had given me. Afterwards I pitched the tent. I thought this place was the diametrical contrast to the cramped and often rather small campsites in southern France, where I had vacationed with my wife a month before. And she is not a naturist, so there was a difference more. Afterwards, I put on plain clothes and cycled to Viborg. Now I wanted to enjoy the city and get something to eat and drink. I chose the path via Hald Ege, which is called The Alhede path. It went uphill a bit, and soon I was sweating like a pig again. Uncool, because now it was in a clean t-shirt. For the same reason, I sat on a bench in the pedestrian area for a while, playing in a fountain that was laid down in the street tiles. I just wanted to cool off a bit, but then thirst overwhelmed me, as I could see the beer bar Oelluminatis light advertising sign from the bench. Great was the refreshment as the brewery’s own Indian Pale ale ran down my throat sitting in the patio. Of course, I was alone again on such a Wednesday night, but the two bartenders on duty soon sat down with me. Both had huge full beards. And I knew from a previous visit that brewmaster Theis also had one. Therefore, I asked if a beard was a necessary employment criterion to be employed at Oelluminati. And ran my hand through my seven millimeter long beard. They laughed at that before I volleyed a new question at them. Was I allowed to pick up food at nearby Viborg Street Food and tuck into it at the bar. However, they responded by announcing that the establishment was closed. Due to poor corporate governance and declining revenue. Alas. Then I had to do with fast food. It turned out the luxury way, you could say, because I ordered a gourmet burger priced at DKK 189 at the restaurant For Enden af Gaden (The End of the Street) close by. I had grown too tired, hot and hungry to go any further. And the food tasted absolutely fine too. Again, I sat outside on the patio while darkness settled around us. Here I was finally not alone. Afterwards, there was just time enouth for another hop infusion down at Oelluminati before it closed and I found my bike to cycle the approx. 11 km "home" to the Vedsoe camp. Fortunately, my GPS has lights, so finding my way around was easy. After arriving out there, I immediately jumped into the lake again, because after the way home I was sweaty again. Wisely enough, I chose to move all my stuff under a canopy. After all, I didn't have to remove it, as I was all alone. Because at night, it began to rain. Not heavily, but for a long time, because it rained every time I woke up that night. 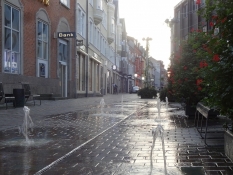 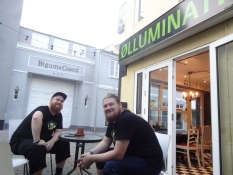 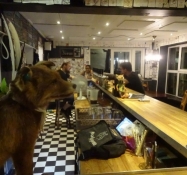