In the morning overcast, later quite sunny. Chilly, 9 to 11°C. A brisk northerly breeze meant a windy tent site and a strong tailwind.

The wind had both increased and turned totally north, for the tent was rattling and shaking as I awoke. The view across the sea to Sweden was really nice, but it was a not easy to enjoy it in the cold and windy weather. And the ashes from the bonfire had swallowed all my kitchen stuff, so it cost an extra doing the dishes. When I finally had found a place, the gas boiler had enough shelter. It wasn't easy to put my lenses in my eyes either. So I wasn't that comfortable in the morning. The solution was to get started in a hurry. And when I sat on the saddle, it was a great day again. The route went beautifully to Elsinore mostly through large forests or on gravel paths right down to the beach. I had the wind halfway from behind, so I was moving rather fast, even though the rough surface and the many short but steep climbs were still there. In Elsinore, I had lunch in a small sunny square overlooking Kronborg. There was shelter here, but so cold that I put on extra clothes. After the sandwiches I had a short stroll in the old town. The cathedral was closed, but also a beautiful view from the outside. I thought there are many dioceses and cathedrals nearby with Roskilde and Copenhagen as the closest ones and in the Middle Ages even the archdiocese seat in Lund. In another spot there was a beautiful mural depicting a market scene in the city. Of course with Kronborg in the background. That castle and the Danish state's collection of the Sound tariffs had given Elsinore an prominent place in history. Today, the ferry service to Helsingborg on the Swedish side of the Sound is a source of income. And it had also been my intention to cross the strait to conquer Sweden on my iron horse. But these plans had been smashed by the corona crisis and the travel restrictions. Because of the stiff breeze from the north, I would have been facing headwinds up to Kullen, which had been today's stage goal today. I switched this to a massive tailwind down to Copenhagen. Thank you. And Strandvejen (The Coastal Road) is not bad, either. 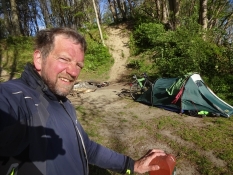 All alone on the tent site, where a brisk breeze made life not easy 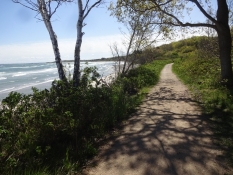 Another fine stretch of gravel path just before Hornbaek 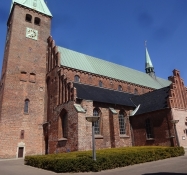 Saint Olai cathedral in Elsinore is a massive strucure

The coastal road runs close to the Sound coast all the way 40 km from Elsinore down to Hellerup and the border with the municipality of Copenhagen. It is known as the paradise of the rich, and if you own a villa on the coastal road, you must definetely be characterized as such. Sometimes they stand down to the very water's edge, so you can't pass them along the water. This is otherwise a privilege that Danes like to boast about, not least to Germans, but here are exceptions to that rule. The reason is old inherited rights that allow the owners to put up fences that run right into the sea. The many marinas along Strandvejen are also striking. Snekkersten, Espergaerde, Humlebaek, Nivaa, Rungsted, Taarbaek, Skovshoved, Charlottenlund and then I certainly did not get them all. Nowadays, the Sound has become a nice clean body of water again, but from my time as a soldier I still remember tales of "Pløresund's" ("Muddy Sound's") disadvantages. Well, I hope the owners know how to enjoy their wealth and privileges and not just take them for granted. Luxury is a thing you easily get used to. And one can easily forget to appreciate it.

The route followed most of the Strandvejen itself on an excellent but congested bike lane. However, it does make a few excursions away from it along small bumpy residential roads. Here the idyll is perfect. Beautiful houses, beautiful gardens, beautiful cars, beautiful people. In Humlebaek you cycle around the famous Louisiana art museum. However, that and all other museums have been closed now for a month, and as cultural life lacks the lobby, especially business has, its establishments were clearly disadvantaged in the order of reopened institutions after the corona shutdown. After Nivaa followed a short stretch of Strandvejen without buildings and a newly tarred piece of bike path. There I really trod the pedals and made my bike move at an adventurous good speed. On the opposite side, bikers fought their way slowly northward in the fierce wind. I just thought, "Been there, done that." Now it was my turn to feel privileged. In Vedbaek, the route turned away from the coast under the railway line, and right by the tunnel stood a bench in sun and shelter. As created for a coffee break. What a refreshment with cake and subsequent sunbathing. 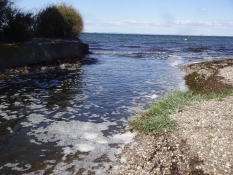 The Mill stream flows into the sea. It ows its name to 14 mills along its short stream 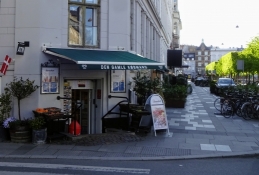 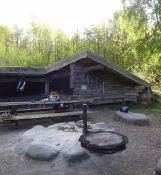